From the Real Estate Board of Greater Vancouver here is the statistics package.

VANCOUVER, B.C. – May 4, 2009 – With more buyers and fewer homes for sale in recent months, the Greater Vancouver housing market has entered a more moderate and balanced state.

For the sixth consecutive month, new listings for detached, attached and apartment properties declined in Greater Vancouver, down 33.7 per cent to 4,649 in April 2009 compared to April 2008, when 7,010 new units were listed. The total number of property listings on the Multiple Listing Service® (MLS®), while slightly down compared to last month, remains un-changed compared to the same period in 2008.

We’'re seeing greater balance in the housing market, as evidenced by a strong sales to active listings ratio of over 19 per cent,” Scott Russell, REBGV president said. “The result is a relatively stable market in which homes are being realistically priced.

The bridge between buyer demand and housing supply is continuing to narrow, which, as we see, helps bring stability to home prices,” he said. “The trends in our housing market over the last couple of months offer a much more comfortable, historically normal set of conditions.”

Sales are rising as per the normal seasonal fluctuation. Sales are still at low levels compared to the previous four years. 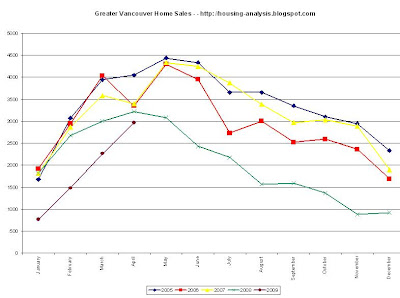 Active listings have been held down because of the rise in sales and it seems that people are not listing as much this year as compared to last. We will see if that trend holds through the summer months. 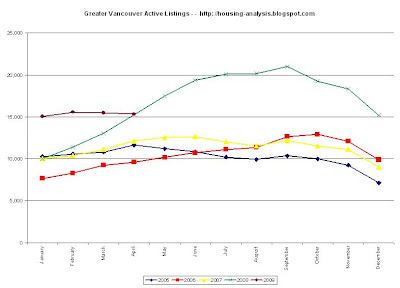 With higher sales and lower listings the months of inventory has fallen to a normal seasonal level in 'balanced' market territory. If we see normal seasonal changes in sales and listings, it would appear that MOI will be flat to rising for the remainder of the year now. This will put more negative pressure on prices. 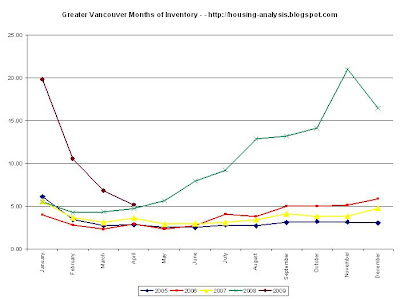 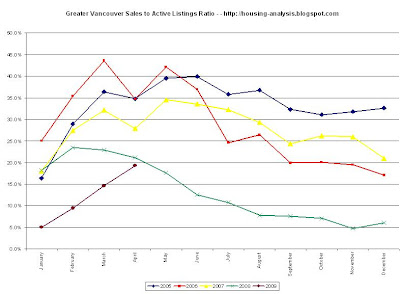 Several people have mentioned that the price increase witnessed in April was abnormally high and I would suggest that it is what should be expected given the level of MOI that was in the market during the month. The quarterly price change witnessed in April falls exactly on the trendline. 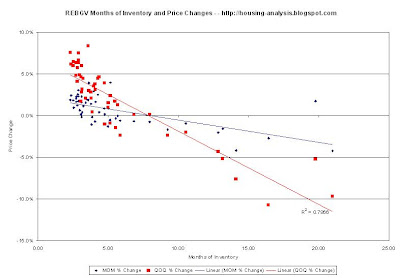 As mentioned earlier, I expect MOI to stay flat in May and rise for the remainder of the year and prices should fall if that is the case. We will see.
Posted by mohican at 5/05/2009 08:17:00 AM

I am a bit disappointed CMHC and REBGV and all those other real estate acronyms were able to convince enough people to drink the cool aid. If this keeps up we are in for a slow painful ride to the bottom. I was really hoping we would be close enough to reasonable prices in fall of 2010 so i could just buy a place and get it over with. These numbers make me think we could be in for a 3 year gradual decline unless the recession gets worse (not that i am hoping it gets worse). I still hold out hope that prices will take a steep dip after the olympics but no one knows for sure

New to this site/blog. Love the graphs mohican! I hope you don't mind yet another person lurking your blog non-stop.

The lower interest rate has really put a wrench into the correction. However, as people see others selling their houses they may start to list increasing supply.

Once interest rates start to increase then the demand will start to dry up and if its timed with an increase in supply then we'll see a downward price.

Is a rally due to interest rates a healthy rally? or healthy for the real estate market? or an unhealthy bandaid?

This is something that I had been meaning to do for some time now. Yes, maintaining and posting on one more blog is going to be even more taxing.replica rolex submariner

The lower absorption amount has absolutely put a bend into the correction. However, as humans see others affairs their houses they may alpha to account accretion supply.