SEPTEMBER HOME PRICES UP 3.6% FROM A YEAR EARLIER

There's a theory that overinflated market prices fall because there are always those who need to sell and nobody, ultimately, who needs to buy (even if they convince themselves they need to). In a further effort to think thoroughly about risk analysis and property I thought I'd share some interesting data mined by France-Pascale Ménard of McGill University in some analysis of marriage dissolution in Canada.

The focus is on dissolution of first unions, and Ménard displays the data as a survival graph, showing what fraction of unions have not dissolved after a certain number of years. Below is the graph of interest, which is for Canada ex-Quebec (see here for breakdown of cohorts) 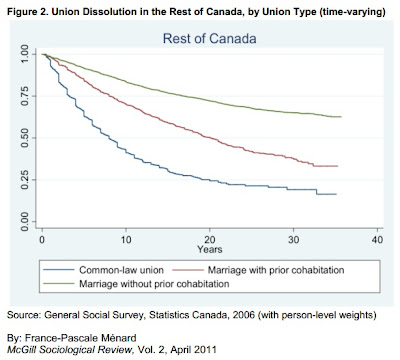 The three lines indicate the fraction of unions still together after a certain number of years of their start, assigned into three cohorts. These are first marriages only, not included are those of non-first unions. Look at the first five year time horizon -- even for the best-performing cohort ("marriage without prior cohabitation") the survival rate is 95%, or 5% of those marriages dissolve. After 30 years 25% of that cohort dissolves.

How does this relate to housing? Marriage dissolution is an event that is difficult to budget at the household level but causes significant impairment to the reduced ability to service mortgages that are dependent upon multiple sources of income. These data highlight a small part of the inherent risks of property ownership, especially through bouts of reduced liquidity and/or depressed prices, not necessarily related to credit rating. While those entering into housing investments are doing so with the intention of never needing to sell, the data paint a different picture of what the reality will be for some.
Posted by jesse at 10/22/2012 11:58:00 AM No comments:

You Can Still Get A Lot Of Loan

"Speaking on CBC Radio, Flaherty said he had no plans to take further action to take froth out of the housing market, after a series of moves to tighten conditions for mortgage lending. The most recent change was in July.
“We’ve done enough, I do not intend to do any more,” Flaherty said, adding that he was pleased at signs of a slowdown in key sectors of the market, like the condo market in the big cities of Toronto and Vancouver."

The government, through OSFI and CMHC have enacted a series of changes to mortgage underwriting guidelines and mortgage insurance qualifications so as to attempt to make credit more dear. I believe the most recent efforts have been made more urgent because real rates on the 5 year bond have been negative for several months.

An interesting exercise is to compare how much loan a borrower can get for a conventional 5 year term mortgage amortized over the maximum allowable, assuming debt service ratios and incomes are flat. To show this effect I have calculated the maximum loan amount a borrower can take assuming a fixed payment and fixed income. I have normalized the results. This shows the effect of amortization and interest rates on how much loan can be taken:

Despite the recent round of amortization pullbacks the maximum affordability is still well above levels seen in the early 2000s. Compared to January 2000, a borrower can obtain 32% more insured loan and 61% more uninsured loan.

The gap between uninsured and insured mortgages is stark. If prices are coming off their highs and continue to show weakness, uninsured loans will start to become insured as loan-to-value (LTV) ratios start increasing. Given the discrepancy between uninsured and insured loans, that will hit the market hard, so hard I expect a reversal of recent moves to tighten lending, in some form, if prices continue to trend weaker.

While the government may want to protect the interests of taxpayers from future liability, if it's like any other asset bubble in history, that goal is likely not realistic. In my view the question has always been how the government is going to have Canadians consume (read: eat) poorly-performing mortgage debts.
Posted by jesse at 10/20/2012 10:04:00 PM 3 comments:


Here are the charts for housing starts, completions, and under construction for Vancouver Census Metropolitan Area (CMA) to August 2012, with September preliminary housing start data: I have been continually hearing that Canadians and Canadian lenders have been more prudent in lending than their American counterparts. I was more than a little interested to read:

Pauline Kendall owns three houses and a condominium but she couldn’t get financing this summer when she tried to add to her real estate holdings.
The East Vancouver resident says the federal government’s new mortgage rules have complicated financing for self-employed people such as herself and for first-time buyers.
“I was a little bit shocked,” says Kendall, 62, who put in an offer on a home she had her eye on in July but had to pull back when the only option was expensive refinancing of the home in which she lives.
Kendall sees it as the ”federal government trying to protect us from ourselves.”
“It’s interesting times to have four properties in East Vancouver and not having a bank interested [in financing a purchase],” said Kendall, who works as general contractor and as a landlord for her properties.
Her homes “average out” to be worth $1 million each and the condo is worth close to $500,000.
“Now, no matter what we own, how much equity we have, we just don’t fit under the new rules,” she said.

Apparently recent changes to income qualification and amortization lengths are throwing wrenches into fancy plans. Just throwing it out there, if Vancouver prices are indeed as high as American housing expert Robert Shiller is claiming -- the same message this and other blogs have been calling out for over five years now -- perhaps those mountains of equity local property investors claim to have may be a tad ephemeral, and loaning more money to one whose ability to service loans depends heavily upon the cut and thrust of the local real estate market may be somewhat against "prudent" risk management guidelines.

It certainly seems the federal government is "trying to protect us from ourselves".

BC Employment by Sector September 2012

Below are some graphs highlighting BC's employment over the past 15 years in various sectors. But first here are the historical employment, participation, and unemployment rates (CANSIM table 282-0117)

Not much to add this month, other than health care and social assistance is continuing to increase its employment relative to other sectors, and Vancouver-area unemployment has increased in recent months, now 1% below its recent peak in 2009. Employment data have noise so it will take several months to see underlying trends.
Posted by jesse at 10/05/2012 10:34:00 AM No comments:

Below are updated sales, inventory and months of inventory graphs for Greater Vancouver to September 2012. (see REBGV news releases.)

September continued with relative weakness compared to not only 2011 but also past years from 2005 (except the residual emerging from the recession of 2008-2009). September sales are near lows in at least the past decade, though close to levels seen in 2008.

This September was another weak report. Sales year-to-date are bad and this has direct effects on incomes of those who depend on resale turnover for income. This level of sales, if they continue to be weak, is going to translate into higher months of inventory (MOI) for the rest of the year (MOI is typically higher in the latter half of the year; an MOI of around 6 normally translates to flat prices) and concomitant price drops already starting to rear their heads in the posted MLS benchmark prices and medians. Prices (as measured by the August Teranet HPI), as predicted by this blog, are now year-on-year negative. I would not be surprised to see prices down -6% year-on-year by February or March of 2013.

As a recurring reminder, there are some worrying clouds on the horizon: population growth is falling, dwelling completions are set to increase over the next year if not longer, and banks are beginning to implement stricter mortgage guidelines in the form of changes to government-underwritten mortgage insurance qualification criteria and second, commencing now, via implementation of stricter mortgage lending guidelines under OSFI's new directives. Further stress in current conditions can be attributed to China's slowing economic growth.

I put together two slideshows here and here on some housing market mechanics basics using Vancouver data, based on some input from other local bloggers.

I do not expect October 2012 sales to be as weak as those seen in 2008, however neither do I expect a marked rebound. Based on my estimates year-end sales are likely going to be around 24000.