As the world’s spotlight turns to the Vancouver Olympics, all eyes will be on Canada. Our nation suffered comparatively less than other G7 economies during the last recession, and our banking system has received praises for being good and boring (read the Sceptical Market Observer’s comment on this).

To be sure, our economy is adding jobs, our stock market has rallied sharply, our currency is close to reaching parity with the USD, commodity exports are up, everything looks great. A buddy of mine even told me that our currency is being bought by central banks around the world. Canada seems to be on a tear.

But things are far from perfect. For one, there is a housing bubble in the making that could last a lot longer than people think. Stephen Jarislowsky, one of Canada’s best known investors, says he believes government measures aimed at juicing the housing market has put the sector in a bubble:

Mr. Jarislowsky is not alone. Other economists have also fretted about a bubble given the stunning rebound in real estate after the slump, and projections for record sales and prices this year. Ottawa is now considering tightening some rules. Said Mr. Jarislowsky: “They have basically encouraged people to buy houses based on cheap mortgages. That has created the opposite effect of what was desirable.”

Then, there is what Peter Foster of the National Post calls the Canada Moral Hazard Corporation:

There has been much official chest swelling over Canada’s relatively strong performance during the financial crisis, but perhaps Canadians shouldn’t — if you’ll excuse the mixing of metaphors — be counting their chickens until they are sure that there are no black swans present. And in fact there does seem to be one dark, plump, bird looming around the back of economic barnyard: the Canada Mortgage and Housing Corporation. Or is that a turkey that should be renamed the Canada Moral Hazard Corporation?

The CMHC was never given a cutesy acronym like its U.S. equivalents, Fannie Mae and Freddie Mac. But why not “Morrie Haz,” acknowledging that it has always been an instrument of moral hazard, the situation where insurance makes the insured-against event more likely?
As we know, Fannie and Freddie — which were privately-owned but “government-sponsored,” which meant they inevitably got bailed out — were front and centre in the U.S. housing market meltdown, which in turn precipitated the global financial crisis.

There are increasing concerns that the Canadian housing market is headed the same way as that of the U.S., stoked by the same factors: artificially low central bank interest rates, and the government insurance/promotion of risky mortgages.

This policy double whammy explains the growing calls for somebody — banks? CMHC? Carney? Flaherty? Anybody else? — to tighten mortgage regulations. These requests appear puzzling until we realize the role of the CMHC in encouraging perverse behaviour.

In a free market, if banks felt a housing bubble building, they would simply tighten standards themselves, either by demanding higher credit qualifications, hoisting rates, or shortening amortization periods. Hoisting rates is out of the question, since rock bottom mortgage rates are now considered by the Bank of Canada to be essential to national economic recovery and protection of our export industries. That leaves Morrie Haz waiting there to insure mortgages, and gives the banks every incentive to hand out any loan that can get insurance. However, they obviously grasp that such cosmic policy fecklessness will ultimately come back to haunt them.
A couple of weeks ago, Peter Routledge of credit analyst Moody’s pointed out that the overheating of the housing market was goosing an unsustainable increase in household borrowing more generally. “As witnessed in the United States,” he wrote, “this movie does not end well.” Specifically, once the punchbowl of low interest rates disappears, households find themselves in trouble, and so do their bankers.

Mr. Routledge noted that Canadian banks likely wouldn’t wind up in the same depths as their U.S. counterparts, but that is only because their riskiest mortgages are backstopped by CMHC. But this makes the systemic threat to the Canadian economy greater.

The U.S. crisis was massive but did not fall entirely on Fannie and Freddie. It was shared with other financial institutions. Nevertheless Fannie and Freddie both failed and had to be taken into government “conservatorship.” Mr. Routledge suggests that the situation is more “secure” in Canada, but as a recent report from the Fraser Institute points out, what this really means that the Canadian system features “massive taxpayer exposure.”

Mr. Routledge suggested that CMHC should tighten its insurance criteria, and this week he was seconded by former Governor of the Bank of Canada David Dodge.

The Fraser study, by Neil Mohindra, confirms that the taxpayer risk from a housing collapse is greater in Canada than elsewhere. He notes that a stunning 90% of all insured residential mortgages in Canada are covered by the CMHC. This amounts to an estimated $480-billion for which Canadian taxpayers would be on the hook if the housing market tanked (although any loss would obviously only be a fraction of this amount).

The study suggests that the CMHC’s activities should be privatized, but that possibility appears a long way down the road, both for practical and political reasons. The biggest problem is that nobody is going to want to privatize a property which harbours a potential time bomb.
The whole thrust of CMHC insurance is to encourage banks to make riskier loans. Normal insurance provisions are based on actuarial principles. CMHC insurance is based — like the activities of Fannie and Freddie — on promoting home ownership. Mixing social and economic objectives usually ends in taxpayer tears.

There is no indication that the Canadian mortgage market has been subject to the lunacies of the U.S., where — for a while — anybody with a pulse could get a home loan. Still, high ratio mortgages — that is, ones with down payments as low as 5% — inevitably carry a hefty risk of default when a bubble bursts. That default then becomes the CMHC’s problem.

As such, notes Mr. Mohindra, Canada is not a model for anybody. Morrie Haz has always been an accident waiting to happen.

According to Moody’s Mr. Routledge, “If policymakers deploy the appropriate tools early rather than late in this period of household credit expansion, perhaps the Canadian movie will end differently.”

But Finance Minister Jim Flaherty knows that ending the party is not going to be popular, which is where inevitable political self-interest compounds those practical problems. Meanwhile CMHC isn’t just a provider of potentially reckless insurance and the depository of last resort for mortgage assets the banks don’t want. Yesterday a representative of Diane Finley, Minister of Human Resources and Skills Development, who is also responsible for CMHC (go figure), was in Montreal handing out stimulus slush under Canada’s Economic Action Plan.

Mr. Flaherty doesn’t want to see a bubble, much less a bomb. But when it comes to which movie we’re coming to the end of, maybe he should check out The Hurt Locker. Just in case.

Of course, lenders like ING, oppose any clampdown to rein in mortgage borrowing. Sound familiar? I agree with Stephen Jarislowsky and I also fear that this movie isn’t going to end well. Enjoy the Vancouver games, because I feel a post-Olympics winter chill headed our way.

Federal government set to restrict mortgages
We will soon see what the changes will be.
From CBC:

Sources say the measures will discourage reckless real estate speculation, such as borrowing heavily for an investment property that is not the investor's primary residence. Flaherty is also set to deter households from taking on more mortgage debt than they can afford to repay when interest rates rise, as they are expected to do later this year.

The finance minister is also expected to discourage people from raising cash by refinancing their homes with larger mortgages — again because they may not be able to make the payments at higher interest rates.

The Canadian Press reports that Flaherty will implement a debt affordability or income test that applicants must pass to qualify for mortgages insured by the Canada Mortgage and Housing Corp. 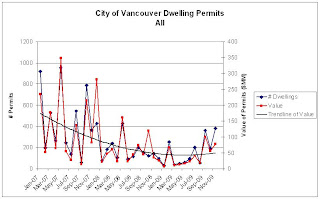 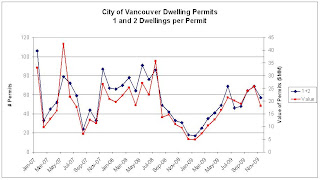 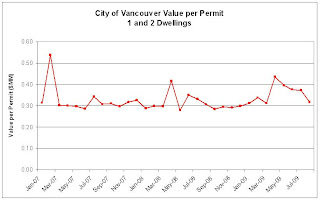 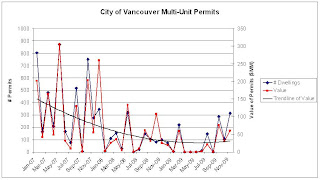 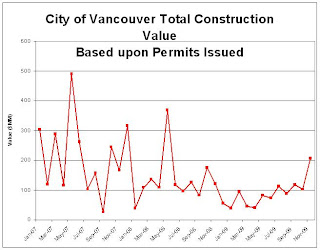 MLS to be Opened Up?

Article from the Globe and Mail.

The democratization of the MLS data would be the best thing to happen for real estate buyers since the data became available online in 1996.
Posted by mohican at 2/09/2010 01:33:00 AM 4 comments: 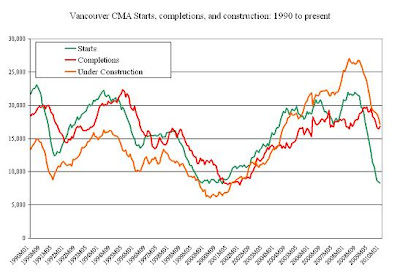 As for construction employment, it has dropped by around 20 percent since the peak. I think it has a long way to go--I would not be surprised at seeing 2001 levels again by the end of 2010. 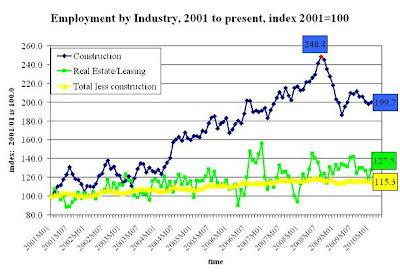 That alone, all else equal, would be enough to push the unemployment rate back above 10 percent. 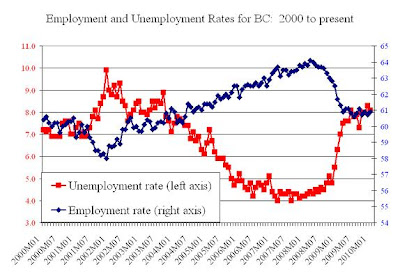 These rates do appear to have plateaued at current levels. However, once the Olympics are done and we see the continued completion of construction projects through the spring and summer, I would not be surprised at all to see 10 percent unemployment in BC by the end of the year.
Posted by Van Housing Blogger at 2/07/2010 04:42:00 PM 18 comments: