So let's look at how recent quarters look in a historical context, here graphed since 1961 to show longer-term trends (there is seasonality so quarters are best compared to each other, also do not integrate these graphs, the total population is periodically adjusted during census counts). 4 quarter rolling averages are shown.

2012 Temporary Foreign Workers (TFW), Student, and Humanitarian Entries in Vancouver and BC
* estimate by subtracting Net from Total In.

The influx of NPRs to BC was around 77,000 in 2012, however the outflux was around 69,000. According to CANSIM 051-0020 there were 151,637 NPRs in BC as of January 1, 2013, which approximately aligns with integrating historical net NPRs from the population growth estimates. NPRs have comprised 19% of the province's total population growth since the beginning of 2008.

Statscan released their 2011 National Housing Survey results earlier this week. I found a couple of datasets that are broadly comparable to the previous 2006 census data. Below are graphs looking at overall population growth and dwelling composition based on structural type (defined here). Here is a brief summary of some structural type definitions:
The first graph looks at the average household size by structural type with the change since 2006. Notice that "apartment, duplex" and apartments with >= 5 stories saw increasing household size. Row and single detached were unchanged, and low-rise apartments saw lower household size. Overall the household size was unchanged since 2006. (Click on image to enlarge.) Next is looking at the distribution of dwelling growth based on structural type. On a per-dwelling basis apartments were the most significant contributor to dwelling formation however on a population growth basis the at-grade structures (single detached, apartment duplex, and row house) housed the majority of the region's population growth. 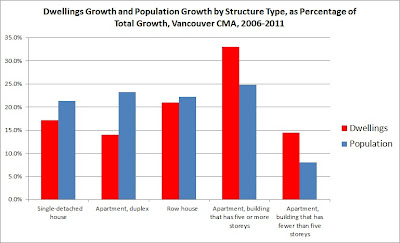 As to why this is, we can look at the distribution based on household size to see that while apartments contribute more on a per-dwelling basis their household sizes are smaller so will have a lower impact on population absorption on a per-unit basis. This is obvious but for posterity here are the distributions: 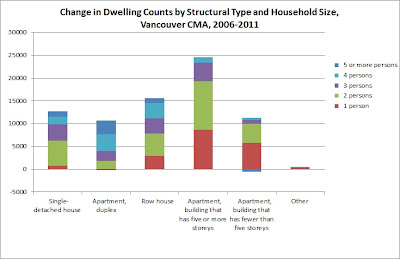 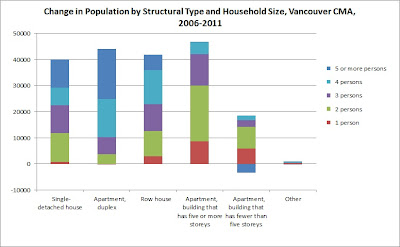 The most interesting thing for me is the stagnation of the household size number since 2006. A few other notes:
Household size could be bottoming earlier than predicted. There are, however, some plausible reasons why household size has only temporarily plateaued instead of continuing a downwards trend since the 1970s:
On another interesting note, laneway houses are likely counted as "single detached" dwellings. There were about 200 such dwellings build in the City of Vancouver before the 2011 NHS. Assuming laneway starts average 40 per month for the next three years, this could add about 1800 additional "single detached" dwellings to the dwelling count for the 2016 NHS.

Below are data graphed from the City of Vancouver's Statistics on construction activity.

The following graphs are broken up by residential permits and value, by source: multi, single/duplex, and laneway. I have also graphed demolitions and alteration/repair/addition permits. (Click on images to enlarge.)

Below are construction permits based on value by source, first in absolute terms and second is the relative distribution:

Below are some graphs highlighting Vancouver's and BC's employment situation. Here are the historical employment, participation, and unemployment rates (CANSIM tables 282-0117 and 282-0087) (click on chart for larger image)

The final graph is more scattered but nonetheless interesting. A few years ago BC Stats highlighted that unemployment differentials between provinces, most notably between BC and Alberta, leads to increased labour mobility. The plot below is between population growth and the BC-Alberta unemployment rate differential (spread). Current BC-AB unemployment differentials have been approximately 2.0% since the beginning of 2011, and current population growth is approximately 40,000/year. Net migration to Alberta (ie people leaving BC for Alberta minus people leaving Alberta for BC) is currently about 11,000 people annualized.

Below are updated sales, inventory and months of inventory graphs for Greater Vancouver to August 2013. (see REBGV news releases) (click on image to enlarge)

The scatterplot of 6 month price changes and months of inventory is below. The most recent datum is the brown dot at about (MOI=7,price_change=3%) . The trend is roughly in line with past years. The other graph I have added is the price-rent ratio for a Greater Vancouver apartment, using REBGV apartment MLS-HPI and CMHC-reported rents (extrapolated, as they are only reported once per year), normalized to January 2005. By this measure, price-rent is currently 15% above its value in 2005 and 27-64% above the range of values from 1992-2004.