Price to Rent Ratios for Vancouver

I have been loath to publish price-rent ratios for Vancouver, even though I think it's one of the primary methods by which prices are set in the long run. I went over the issues with price-rent ratios here. For a backgrounder on why this is important, read Calculated Risk's posts (like this one) and refer to the Federal Reserve Bank of San Francisco's letter from 2004 on the subject.

When looking at an area like Vancouver with increasing density one must be careful using detached dwellings when formulating price-rent ratios as the earnings are forecast to increase greater than rental inflation into the future and would carry a higher price-rent ratio. The best gauge we have for a time-insensitive price-rent ratio is by using apartment rents and prices, that is, properties that have undergone most of their density increases.

Below is Greater Vancouver's apartment price-rent ratio, measured by using the MLS-HPI for apartments and the CMHC-surveyed one bedroom apartment rents, then normalizing them to a point in time. 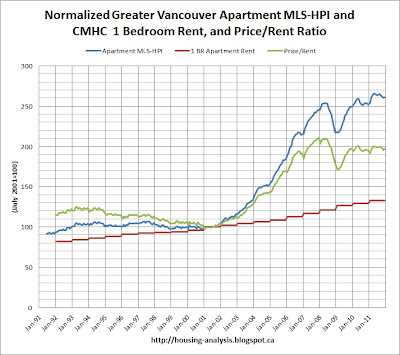 As moderate stress test we can assume that the price-rent ratio will revert to at least within its historical band of 100-120 (on the graph above) in 5 years. For different rental inflation numbers the annual nominal price drops, from December 2011, required are:
For reversion to the middle of the 100-120 historical band:
For reversion to the bottom of the 100-120 band:
The US's experience found that most price drops occurred within several years followed by a more prolonged (and still ongoing) period of flat prices and at-inflation rental growth to fully revert price-rent ratios back to their norms.


There seems to be no slowdown in construction activity for the next while.


Edit: Below are 12 month moving average 1+2 dwelling permits plotted with the Teranet HPI. There is a 6 month shift in permit data due to the 12 month averaging filter; if one accounts for that the correlation is 0.95. Something to think about.

(Note: graph not started from zero to highlight correlation)

Long-time Vancouver real estate blog readers will remember the work mohican did regarding scatter plotting months of inventory (MOI, defined as month-end for-sale inventory divided by sales of that month) with price changes. Price changes have been based on the REBGV detached benchmark, alas the benchmark was revised and historical data are not available. Nonetheless the ever-resilient Vancouver Housing Blogger (VHB) has attempted to stitch together a longer-term MLS HPI and the results can be seen here.

After a bit of refinement it's been possible to improve the price-change-to-MOI fit by looking at price changes over different periods and leading or lagging the datasets. Using Teranet, not MLS-HPI data, I have found the best fit to be as follows:

The best fit is looking at 6 month price changes, delayed by 3 months, and plotting against 3 month moving-average of REBGV months of inventory (MOI). I have plotted above on semilog only to show the effect has a geometric component. Nonetheless a linear correlation is about -0.9, or in statistical lexicon, not bad.

I would take away the following things from this graph, (and I will have much more over the coming months as monthly data become available):

BC Employment by Sector July 2012


Below are some graphs highlighting BC's employment over the past 15 years in various sectors. But first here are the historical employment, participation, and unemployment rates (CANSIM table 282-0117)

And the service producing sectors.

Nonetheless, it appears on balance that BC's economy has continued to recover alongside the rest of North America.
Posted by jesse at 8/14/2012 11:50:00 PM No comments:

An important part of the housing market is the rental stock, most closely surveyed by CMHC from a universe of just over 100,000 units from buildings containing 3 or more units (CANSIM table 027-0040, using rental survey data taken every October). This dataset is interesting to track because its pool has been relatively unperturbed by new dwellings: most of the rental stock tracked by CMHC is of older vintage. This provides a way of tracking same-unit rental growth over time, something that individual investors would be most concerned about and provides a method to directly compare same-unit price trends to their yields, at least on a relative basis, something that can become muddied with the change of vintage of a survey's data sources. I have pulled the data to look at how rents have changed in Vancouver CMA for this "baseline" rental pool and have normalized them based on 2002 CPI-adjusted prices.

We can see that real rents have been appreciating between 0.75% and 1.25% per year. Note that from between 2006 and 2010 population growth was on the high end of historical ranges and this is correlated with tightness in the rental market.

Looking at the rent to median income ratio:

Median incomes have fluctuated more than rents, causing the ratios to be more variable. After 2008 it can be immediately seen that as a percentage of income rents are now more dear.

An interesting graph is tracking dwelling spreads -- the percentage change between a dwelling type and the dwelling type with one additional bedroom:

What this graph shows is a "curve" for the spread between different dwelling types, in some ways akin to a bond yield curve. A diminishing spread would indicate compression between dwelling types.

There had been some thought that real rents have not been increasing. These data indicate that real rents are increasing at a rate around 1% per year, with more marked changes happening recently from 2006 through 2009. In terms of incomes there is additional fluctuation due to labour market changes, however it appears that rents are over longer time periods tracking incomes closely, though 2011 has produced tighter conditions.

Changes in population growth appear to be having an effect on rental rates. It is unclear recent tightness in the rental market is a permanent change -- for example, rents are increasing because the city is comparably more desirable for a given income -- or if we should expect relative weakness in rental growth going forward. The most recent rental survey from April 2012 indicates no strong signs of weakness.
Posted by jesse at 8/10/2012 01:32:00 PM No comments:

An anomaly has presented itself in some CMHC data regarding matching the completed, absorbed, and unabsorbed datasets available through Statscan's CANSIM tables. First a bit of background on the data I'm using:

So taking the reported unabsorbed inventory and reconstructing it using completed and absorbed data should produce a match. CANSIM data are only available for single and semi detached properties so these are the data I have used. Alas they don't seem to track very well in absolute terms: The reason for the divergence is unclear but a much more interesting thing arises upon visual inspection: the higher-frequency terms appear to track each other closely. To isolate this effect I added a first order highpass filter with 6 month time constant and yield the following result:

Indeed for most of the series over the past 24 years the higher frequency terms are similar, except in the past 18 months or so where the reported absorbed inventory has fallen markedly short of reported completions, but this is not showing up in the reported unabsosrbed inventory.

I'll leave it for CMHC to figure out what's going on before making any speculations, but for those tracking unabsorbed inventory when looking for potential distress in housing markets, this should be something that should be resolved. If I can find the multi-unit absorbed/unabsorbed datasets I'll add to the analysis to see if this effect carries over. (Multi-unit is a much more significant component of Vancouver CMA's construction activity; detached is about 25% in terms of dwelling completions in the past few years.)
Posted by jesse at 8/09/2012 10:51:00 PM 3 comments:


Here are mohican/VHB's charts for housing starts, completions, and under construction for Vancouver Census Metropolitan Area (CMA) to June 2012

The last few months have seen a continued lag of completions and an increasing amount of starts and under construction volume. Completions, as expected, are trending upwards. As 2012 progresses we should anticipate an eventual increase in completions, though it may not show up until the later months of the year given the high mix of multi-unit construction that tend to have longer build times. One of the risks facing Vancouver and BC is a continued below-trend population growth due in part to unemployment differentials with other parts of the country, in turn wrought by over-investment, particularly in residential structures. If this event occurs, one need only refer to the early 2000s to see the starts and completions are likely to head, and what that would mean for construction employment and BC's GDP growth.

Should population growth remain subdued, resulting lower GDP growth of future years would, in my view, be most reasonably attributed to previous investment excesses, not then current conditions. Something to keep in mind.
Posted by jesse at 8/08/2012 11:46:00 AM No comments:

Below are updated sales, inventory and months of inventory graphs for Greater Vancouver to July 2012. (see REBGV news releases and July stats package)

July continued with relative weakness compared to not only 2011 but also past years from 2005 (except the residual emerging from the recession of 2008-2009). July sales are the lowest since the early part of the turn of the century, though close to levels seen in 2008.

This July was another weak report. Sales year-to-date are bad and this has direct effects on incomes of those who depend on resale turnover for income. This level of sales, if they continue to be weak, is going to translate into higher months of inventory for the rest of the year (MOI is typically higher in the latter half of the year; an MOI of around 6 normally translates to flat prices) and concomitant price drops already starting to rear their heads in the posted MLS benchmark prices and medians. Prices (as measured by the Teranet HPI) will likely be year-on-year negative by the end of the summer. As a consistent (bordering on boilerplate) reminder, there are some worrying clouds on the horizon: population growth is falling, dwelling completions are set to increase in the latter half of the year, and banks are beginning to implement stricter mortgage guidelines implemented last month in the form of changes to government-underwritten mortgage insurance qualification criteria and second, to commence over the coming quarters, via implementation of stricter mortgage lending guidelines under OSFI's new directives. Further stress in current conditions can be attributed to China's slowing economic growth. On the other hand mortgage rates remain low, near net zero real territory, and it is possible for rates to remain low for a prolonged period (i.e. years). It is possible that Asian economies are due for another round of investment spending through coordinated government stimulus measures -- not only in Asia but also in other jurisdictions -- and that can plausibly lead to a renewed bout of current account flows into Vancouver-area property investments.

Ben Rabidoux over at theeconomicanalyst (@BenRabidoux) has produced the following graph outlining year-over-year change in average resale house price in Vancouver to June 2012. July has continued with double-digit YOY price changes. Something to think about.