REBGV released their stats package through December 2017. Here are the numbers: 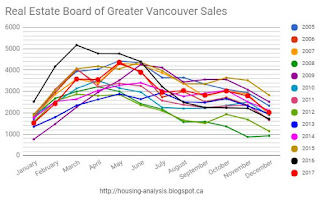 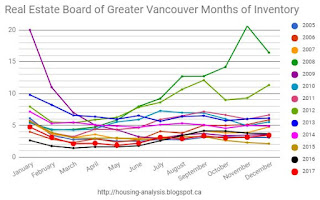 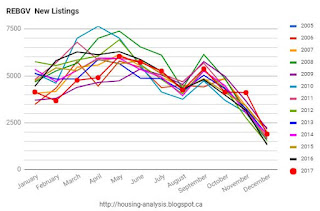 Sales are still robust and new listings are averaging slightly higher of late. (November was very strong for new listings.) Regardless the recent addition of new listings, inventory is still very low; it takes many months to accumulate for-sale inventory and move months of inventory back into a "balanced" market position.

As a summary of 2017, sales were strong; not as strong as 2015 or 2016, but strong nonetheless. Much of the strength came from attached units with detached units pulling back somewhat after their sensational performance in 2016. I had predicted an increase in for-sale supply mid 2017 that failed to materialise — I underestimated the production delays of new units and how that delay has knock-on effects. I realised this relatively early in 2017, nonetheless it was a "miss" on my predictions for higher for-sale inventory by the end of Q3 2017.

It may sound funny, but much of my "most likely" predictions for 2018 will remain the same from 2017:


If prices are to stop rising (they have been on a tear these past couple of years), there needs to be more for-sale inventory. This is not up for much debate. The only realistic way of getting more for-sale inventory is through new listings outpacing sales plus expiries. That means a combination of above-average new listings and below-average sales, or we're off to the races again. Whether or not you "believe" that "moar" housing supply will help crimp price gains, we are about to find out. That's exciting. Woo. Hoo.

And what of all the purported foreign capital coming into the market? I think it's an odious issue — but by no means the only and not necessarily the most significant one — and I've from time to time beat my regulatory drum on Twitter for anyone who cares to listen. The regulatory oversight of capital traceability is lacking and few people really fear getting caught. I am hopeful there will be further action on the capital tracecability file in the coming year. (Yes there has been some action, if you know where to look...)