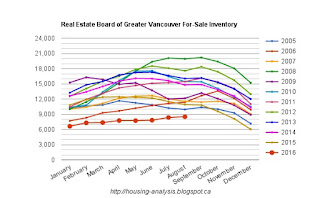 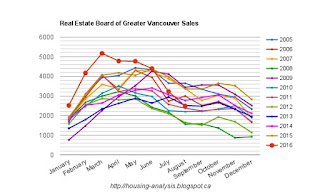 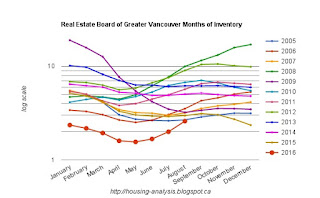 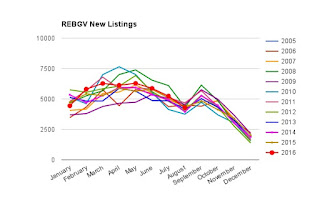 Sales are average but markedly slower than the spring. Inventory is creeping higher but slowly. It is still very low because new listings are not significantly higher than average. A few more months of "average" would set up 2017's starting inventory "base" to be healthy. 2017 could then be whatever it wants itself to be. (That was not the case at the beginning of this year when inventory was very low.)

A slowdown had to happen sometime. That necessarily meant lower sales. My suggestion is not to over-think the most recent sales data — corrections take years to manifest and a significant and near-unprecedented 20% "correction" would only return prices to 2015, let alone to where some people are hoping they settle.

In summary, evidence of a constructive evolution in Vancouver housing market conditions continues to accumulate.
Posted by jesse at 9/02/2016 10:03:00 AM 1 comment: