REBGV released their stats package through October 2018. Here are the numbers: 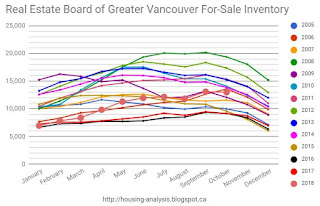 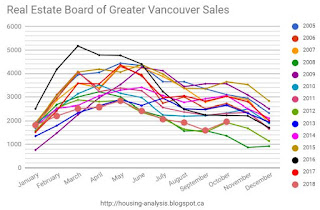 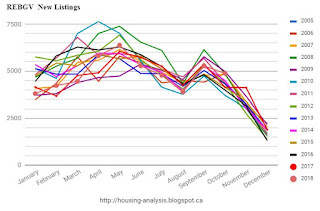 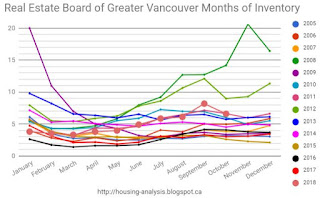 Sales are a bit better, as they were in 2012 in the last "downturn", the difference being that inventory is still rather low, leading to a lower months of inventory than that year. We can see the relationship between price changes and MOI is still generally being followed, though it is apparent that price drops are bit more aggressive than before at previous MOI levels (the red dots on the graph, the latest point is at about (7,-0.04)): 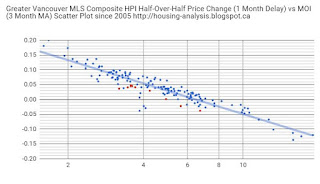 Sales are still weak, despite the upturn in October. Some are calling out the sales trend similarities to 2012 as indication the worst is over and the next couple of years will see things re-stabilize (i.e. a soft landing like we had in 2013 and 2014). I acknowledge that 2019 may plausibly prove itself to be a stabilizing year (which would mean better sales than this year). Nonetheless I don't think anyone should lose history that prices were on an absolute tear from mid-2015 through mid-2017, and unless that was simply rationally correcting what was significant undervaluation, we should be prepared for more than a couple of years of at least flat prices. In other words, it's hard for me to point to the similarities to 2012 as strong evidence that the worst is over, especially with some likely financing and additional inventory headwinds that will be coming our way. A "soft landing" is a distinct possibility but so is a few years of more meager pickings.
Posted by jesse at 11/05/2018 05:51:00 PM 23 comments: