Below are data graphed from the City of Vancouver's Statistics on construction activity:

An interesting measure is to cross-correlate the Teranet HPI to single family detached permits, producing an RSQ of 0.94. Although it's not obvious in the graph, the HPI will slightly lead the change in building permits. If the HPI rose/dropped that means building permits were likely to rise/drop in  about 1-2 months:

There is more supply on the horizon, though single family permits have waned of late. Somewhat strange is the marked increase in the value per permit of 1+2 dwelling constructions, that have doubled in the past four years. If I were to guess I would say this is due to how dwelling costs are reported and the mix of dwellings, more than an increase in construction costs.
Posted by jesse at 5/22/2013 03:50:00 PM No comments:

A method of measuring relative valuation is to look at price-rent ratios, a "price-earnings" ratio for real estate. Vancouver does not have a market rent index, however CMHC does provide rental survey data that I have quickly validated to be close to prevailing rents. The price is garnered from the Greater Vancouver MLS-HPI (note the MLS-HPI before 2005 uses a different base so I "stitched" the two indexes as best I could). The results are normalized for Jan 2005 below:

The red line has been slowly falling from 2008 onwards, most recently the drops have been from an equal combination of rising rents and falling prices. The historical bound for price-rent ratio before 2000 has been between about 70 and 90. As an estimate, say the price-rent ratio is to revert to this historical bound in five years. What average annualized price change is required to do this?

Rents have averaged about 2.5% annual gain since the 1990s. Under this scenario, five years of -2.5% nominal price changes will put the price-rent ratio within historical bounds. To get to the middle of this range would require a more hearty -5% annualized nominal price change. If rental growth slows due to slow income growth or oversupply, price drops would need to intensify.
Posted by jesse at 5/15/2013 04:00:00 PM 7 comments:

Some rumours abound of maximum amortization lengths for uninsured mortgages being set to 25 years as a form of macroprudential easing of relative excesses in the Canadian housing market. To quantify this change, and put it in recent historical perspective, I have graphed the change in affordability relative to 2000 for a fixed income and debt-service ratio, using prevailing average mortgage rates for both insured and uninsured mortgages. Currently 30-year amortizations for uninsured mortgages are possible, but if these were dialled back to 25 years, the effect on maximum loan affordability is evident: 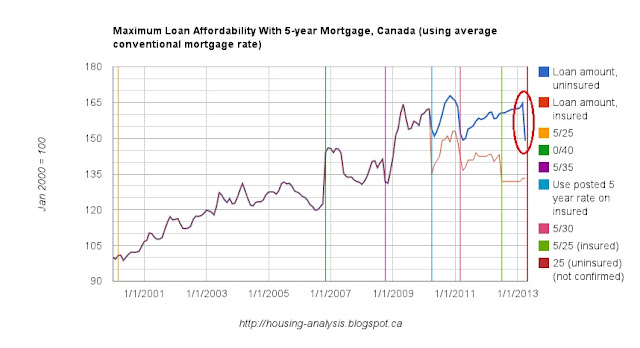 It should be clear that the proposed changes are not announced or in force, but we can see in recent months the gap between uninsured and insured loan affordability has widened. If prices are to fall an uninsured mortgage can quickly become insured, hence, likely, the consternation in Ottawa of this gap. If amortizations were to change from 30 to 25 years this amounts to an affordability drop of 10%, and a halving of the insured-uninsured affordability spread from 24% to 12%.


Below are updated sales, inventory and months of inventory graphs for Greater Vancouver to April 2013. (see REBGV news releases.). (My "next month estimate" numbers are what I think next month will be. Also note these graphs update automatically so older blog posts from previous months will show the same graphs as the ones below.)

The scatterplot of price changes and months of inventory is below. As the Teranet data roll in, look for more points appearing the right-hand side. March 2013 reported was about flat year-on-year, which is higher than I expected but not what I would consider anomalous. This gives us some indication on how elevated MOI must become to elicit meaningful price drops.

April sales continued with relative weakness compared to not only 2011 but also past years from 2005 (except the residual emerging from the recession of 2008-2009). April sales are near lows in at least the past decade, though above levels seen in 2009. In 2009, sales vaulted back significantly from April onwards. It is unclear whether or not we can expect similar behaviour in 2013; early indications are for normal seasonal patterns to prevail, with sales remaining lackluster.

To partially compensate for weekend framing effects I have plotted sales per working day on a month-by-month basis.

This April saw another weak report. Sales for the year are bad and this has direct effects on incomes of those who depend on resale turnover for income. As the months progress it becomes more and more difficult to hit yearly sales targets in-line with those seen in the last decade.

As a recurring reminder, there are some worrying clouds on the horizon: population growth is falling, dwelling completions are set to increase over the next year if not longer, and banks have implemented stricter mortgage guidelines via changes to government-underwritten mortgage insurance qualification criteria and via implementation of stricter mortgage lending guidelines under OSFI's new directives, and it looks like they're not done tightening. Further stress in current conditions can be attributed to China's slower economic growth..

On the other hand mortgage rates remain low, near net zero real territory, and it is possible for rates to remain low for a prolonged period (i.e. several years). That stated, longer-term 5-year-term loan rates may have some room to move up in the coming year as the advent of the removal of accommodative overnight rates starts entering the purview of the 5 year time horizon.

Emerging Asian economies are starting to stall again after last year's stimulus from China has mostly run its course. I expect this will start wearing on foreign-derived income that could end up financing Vancouver-area property purchases. I expect further stimulus bouts in the years to come.

My estimates for March were for inventory of 16628 (actual 16730) and sales of 2661 (actual 2627) based on estimating average changes from February of years 2005-2012. Using the same technique estimates inventory and sales for May of 17729 and 2911 respectively (MOI=6.0). March is typically the nadir for MOI in recent years, the exception being 2009 that saw MOI decrease throughout the year. Taking a "hybrid" approach would suggest May's MOI, adjusted for additional working days, being roughly flat compared to April.
Posted by jesse at 5/13/2013 10:36:00 AM No comments: