Condos and Detached Sales in Vancouver

With the latest statistics released from the REBGV I thought I would present an interesting graph showing the ratio of apartment to detached sales over the past 10 years. 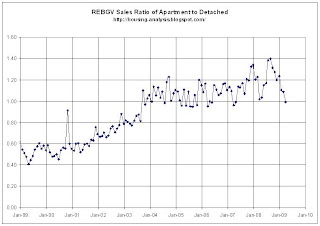 The interesting thing is the marked shift in 2004 to a permanently high ratio of around 1.1 or so. I have suspicions the reporting may have changed at that time but, suspending this possibility for a moment, we can see a few things.

There are proportionally more condo sales in the second half of the decade than the first. This fits with the trend of more condos being built so it tells us that condos are being traded more than they were before and/or there are more condos to trade.

The other thing to note is that, relatively speaking, April and May are generally the strongest months for SFH sales compared to condos. Hard to see; it's a weak relationship. This would fit with when common sense would dictate families would buy so as to move in during the off-school summer months. It looks like this year the move-up market is still in a buying mood. We shall see how well the real estate food chain supports them.

I was looking for data to indicate if 2009 is seeing a different trend from other years. Starting in 2007, there is more volatility in the sales mix with April-May having a higher mix of detached. It will be interesting to see if a similar trend follows again this year. It does not tell me too much, unfortunately. Total sales volume in 2007 and 2008 had larger drops after May than other past years, though it is too early to tell if 2009 will share this trend.
Posted by jesse at 5/04/2009 09:58:00 PM

Interesting! Thanks for generating this chart.

The first thought that came to mind is the ratio is understated-- I presume the data is from REBGV numbers, which usually don't include new condo sales from developers not listing on MLS.

My second thought is that through this boom, demand is being stolen from the future-- people who would normally wait longer to buy are buying the most affordable product at an earlier age.

My third thought, related to stealing demand from the future, is that it represents more people moving up from a condo to a nicer condo, rather than moving up to a now-too-expensive house.

I think short term investors likely have some part in the high ratio.