REBGV released their stats package through December 2016. Here are the numbers: 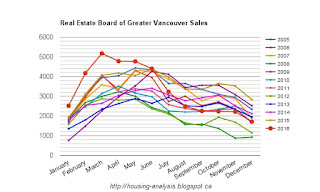 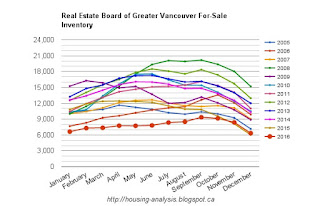 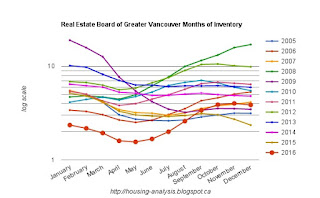 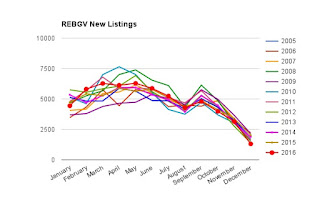 As 2016 draws to a close it's worthy of a look back at the year and some lessons for what happened. 2016 saw a frenzy of sales in the first half of the year (strong sales were already present in 2015 and early 2016 was arguably a continuation of a crescendo of activity). New listings were above average as well, but have dropped off in the latter part of the year. Months of inventory is negatively correlated to price changes and indeed the first part of the year experienced robust price gains with few other years as equals.

Conditions in the second half of the year were more subdued and were trending slightly below average for sales, though nothing as severe as 2008 and 2012, years in which year-on-year price drops occurred.

At the beginning of 2016 there were signs that it was going to be a strong year for sales. The strength in fall of 2015 coupled with low inventory was enough fuel to ensure price strength through the spring. Nonetheless the strength of sales in the spring of 2016 surprised me and likely most objective observers in the RE industry. I am not fully certain the reason for the strength but I expect it was a combination of factors including: offshore capital, low mortgage rates, increasing household formation, a spike in construction activity, and inter and intra-provincial population growth. I remain unconvinced that one factor was the overwhelming determinant to 2016's sales strength.

On the policy side, 2016 has seen the federal government take more aggressive action through macroprudential guidelines via OSFI, designed to limit the amount of lending both through underwriting guidelines as well as providing a significant shift in policy with respect to unverified income loans ostensibly popular with those using foreign capital to finance house purchases. These policy shifts are likely starting to kick in now. In addition there are indications that gaps in money laundering oversight are starting to close, though I have yet to read of anything substantive on this file yet. The BC government implemented a foreign buyer tax in a rather heavy-handed fashion and the City of Vancouver has implemented an empty home tax. Both of these taxes are likely to be challenged in the courts in the coming year.

The provincial government has announced a program where first-time homebuyers can get a loan up to just over $35,000 towards purchase of a home, though it's notable that there have been similar schemes in years past that aren't that different. (There was a recent scheme for first-time homebuyers purchasing new homes not too long ago, then there was the brief 40 year amortization and 0% down schemes from the mid-2000s, so it's not like this recent provincial scheme is anything out of line with what we've seen before.)

There appears to be more coordination between municipal, provincial, and federal housing policy than I've seen in a while. This bodes well for ensuring some unfortunate gaps in data collection and sharing are closed.

What will 2017 bring? Predictions are at best statistical but here are my "most likely" predictions for 2017:

In the long run I expect detached housing in the core to outpace denser housing forms and suburban housing in terms of land value appreciation. Pressure to increase density will continue to grow, but we're talking a many decades trend that I fully expect to continue. Does that make detached a better investment? No.