Some Thoughts on Bank of Canada and House Prices

Deputy Governor of the Bank of Canada John Murray gave a speech to a crowd in New York on global rebalancing. I'm certainly not learned enough to comment meaningfully on his arguments and rationale but he did mention something in subsequent commentary about Canadian housing:

Canada's heated housing market appears to be cooling as desired, a senior Bank of Canada official said on Tuesday, although he noted that housing starts remain unusually high.


Housing prices and construction in Canada roared higher in 2011 amid low interest rates, sparking fears of a U.S.-style bubble. The market started to slow after the government tightened rules on mortgage lending in July, and policy makers hope to see a gradual softening rather than a crash.


"It's still early days. But we're certainly seeing evidence of movement and acceleration in the right direction," Murray told a business audience after giving a speech in New York.


"Some sort of smooth transition, at least on the housing side, is what we're looking for," he said.

An interesting comment for a "housing analysis" blogger! Murray is commenting that transitioning housing to a more sustainable level is something the Bank is looking for, and on which is likely advising the government to form fiscal policy. So we can play some guessing games as to what the Bank of Canada would like to see for a "smooth transition" and what that means.

What are the risks of high house prices and debts? Currently there is some risk of external economic shock to incomes, but absent that, with real rates depressed, debt-service ratios are currently for the most part manageable. If rates increase, however, this poses a significant headwind for the Canadian economy and worse could be almost impossible for policymakers to contain the fallout. Luckily, based on the yield curve, it looks as if rates have a good chance of staying low for a prolonged period, perhaps for the rest of the decade. The question then is what does Canada need to do in the coming years to ensure that when interest rates do rise she will not be caught out with excessive debt levels and overinflated asset prices.

Based on Murray's comments we have a smidgen of a clue what the Bank's and government's strategy is on the front of asset price reversion. It looks as if they are trying to pull of a "smooth transition" of prices back to levels that are able to be carried with historical interest rates. If prices continue at current levels (or increase) they will not have reverted quickly enough to stave off a big shock when rates rise. If prices fall too quickly this will lead to situations where a large swathe of owners are in negative equity situations, something that has knock-on effects to the broader economy. Given the assumption the Bank wants to control the band in which prices revert, we can do a quick calculation what that would mean for prices.

Say prices as a ratio to incomes are 40% above their long-term average. To revert prices to this range will require a 30% drop. To do this in seven years requires a -5% annual drop in the price-income ratio. Assuming incomes rise by 2% per year that means national prices need to drop at -3% per year for seven years to revert. If markets like Vancouver are, say, 50% overvalued, that will require prices dropping at -5% per year with 2% annual income gains to revert.

Prices do not often move in a straight line, rather we should expect that price drops will be more severe near the middle of the reversion and less severe near the ends. We can approximate this trajectory as a raised-cosine profile, say

where P is the price, Pi is the initial price, Pf is the final price, x is the year from start of correction, and L is the duration of the reversion target. Below are the year-on-year price change results for a 20% and 30% decline in prices: 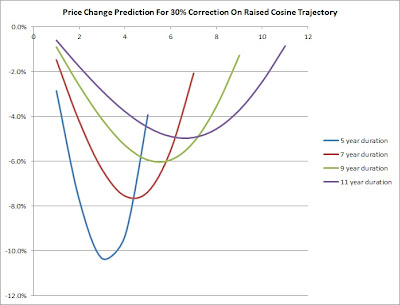 But here's the thing -- if prices are to revert in a controlled manner, as regular readers of this blog know, this necessarily requires a certain ratio of for-sale inventory to prices. In other words, to ensure prices drop at a defined rate it will likely mean the government will need to control the level of sales. The only ways I can see them accomplishing such a feat are through controlling immigration intake -- not easy since they don't have much control on where immigrants settle -- and through credit availability.

In short, if the Bank of Canada is indeed "price targeting" so as to attempt to revert housing valuations to their long-term averages in the advent of future interest rate hikes, I believe we can expect further adjustments to controls of credit availability, both looser and tighter, over the coming years. It will remain to be seen how much capacity is left to accumulate additional credit, and where it can be stuffed!
Posted by jesse at 11/30/2012 02:36:00 PM 2 comments:

Here is the chart for housing starts, completions, and under construction for Vancouver Census Metropolitan Area (CMA) to October 2012: Below is an overview of an analytical method used to predict Vancouver prices. I have been predicting price changes on a short-term basis (looking out a few months) and this is not done through pie-in-the-sky guesswork, this is based on a defined set of steps and calculations.

Housing-analysis blog creater and owner, and financial planner, "mohican" noticed back in 2007 there was a (negative) correlation between so-called "months of inventory" (MOI), the ratio of reported for-sale inventory to monthly sales, to price changes. MOI tells us how long it will take to clear inventory at current sales rates. Other equivalent measures you may hear are months of supply, sell-list ratio (the inverse of MOI), and months to clear. This blog refers to MOI, and data can be found on REBGV news releases. (Note that Fraser Valley real estate board also published similar stats, and the correlation is good there as well; this analysis is only for REBGV data.)

Price changes are measured using the Teranet HPI, however similar correlations to MOI exist with the MLS-HPI and to a lesser extent median price changes. In order to account for month-month sales noise MOI is averaged over three months. I only have complete monthly inventory data for REBGV to 2005. There are likely data before this but I do not have access to them.

Below is a graph of the cross-correlations between price changes over different intervals and 3-month-moving-average MOI:

What this shows is that the highest correlation exists when correlating half-on-half price changes with a 3 month delay. The scatterplot showing this relationship is below:

Note MOI is displayed on as logarithmic scale. Other correlations are not as good but still not bad. Looking at year-on-year and quarter-on-quarter, both appropriately time-shifted, show the relationship is not as high but still obvious:

The most recent price weakness is shown on the QOQ graph above, indeed 2012 is behaving as previous years.

Take the HOH graph above and apply current 3 month average MOI (about 10) to the graph. That implies that we should be seeing a -5% half-on-half change in the Teranet HPI 3 months from now, in January 2013. A weaker measure is to use the YOY graph and forecast prices 6 months from now; based on that measure we should see the Teranet HPI down -4% to -6% year-on-year in April 2013.

In summary a method of forecasting Teranet HPI for Vancouver has been presented. By finding peak negative cross-correlation between months of inventory and price changes over defined periods it is possible to calculate predictions with varying degrees of strength. Further work expanding this method into other cities is possible.
Posted by jesse at 11/23/2012 10:04:00 AM 13 comments:


Below are updated sales, inventory and months of inventory graphs for Greater Vancouver to October 2012. (see REBGV news releases.)

October continued with relative weakness compared to not only 2011 but also past years from 2005 (except the residual emerging from the recession of 2008-2009). October sales are near lows in at least the past decade, though close to levels seen in 2008.

Due to weekend framing effects the rebound on the sales graph above is overstated. To partially compensate for this I have plotted sales per working day on a month-by-month basis. Using this more accurate gauge we can see that relative strength in October is muted:

This October was another weak report. Sales year-to-date are bad and this has direct effects on incomes of those who depend on resale turnover for income. I would not be surprised to see prices down between -6% and -4% year-on-year by February or March of 2013.

As a recurring reminder, there are some worrying clouds on the horizon: population growth is falling, dwelling completions are set to increase over the next year if not longer, and banks have implemented stricter mortgage guidelines in the form of changes to government-underwritten mortgage insurance qualification criteria and second, completely as of November 1st, via implementation of stricter mortgage lending guidelines under OSFI's new directives. (Credit Unions are one notable exception.) Further stress in current conditions can be attributed to China's slowing economic growth.

While October sales per day were about 9.6% higher than September's, some perspective is required: sales levels are still well below the average of the past decade. All else equal I expect November sales to track October's level, perhaps slightly weaker but not markedly so. I estimate total sales for November to come in at about 1700.

BC Employment by Sector October 2012


Below are some graphs highlighting BC's employment over the past 15 years in various sectors. But first here are the historical employment, participation, and unemployment rates (CANSIM tables 282-0117 and 282-0087)

The red line on the service sector graph, "Finance, insurance, real estate and leasing [52-53]", has dropped down as it did in 2008. Transportation and warehousing is showing a marked rebound as % employment. Strength in manufacturing has waned of late. This is not what I would consider a bullish survey -- unemployment remains stubbornly high compared to the government's targets, though perhaps these levels are not much of a surprise if one looks at how the low levels of unemployment of the last decade were produced.
Posted by jesse at 11/02/2012 10:50:00 AM No comments: