On the mechanics of CMHC construction data

Definitions are as follows (link):

Start: For purposes of the Starts and Completions Survey, a Start is defined as the beginning of construction work on a building, usually when the concrete has been poured for the whole of the footing around the structure, or an equivalent stage where a basement will not be part of the structure.

Under Construction refers to the number of units under construction at the end of the period shown, and takes into account certain adjustments which are necessary for various reasons. For example, after a start on a dwelling has commenced construction may cease, or a structure, when completed, may contain more or fewer dwelling units than were reported at start.

A Completion is defined as the stage at which all the proposed construction work on a dwelling unit has been performed, although under some circumstances a dwelling may be counted as completed where up to 10 per cent of the proposed work remains to be done. 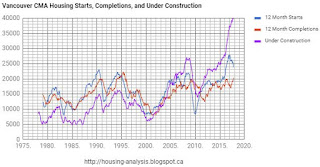 Starts have outpaced completions since the end of the last recession. More recently starts went plaid and under construction has gone off the charts (literally, in the case above). Since the construction process has a fair amount of fixed resources (engineering, labour, materials, inspections, etc.), this sudden surge in activity has resulted in completions lagging moreso than they have in the past (i.e. projects have been delayed), and units under construction has ballooned as starts, until just recently, have continued apace.

As the construction backlog clears, completions will increase as resources become freed up to be transferred to other projects. As completions increase, units under construction should begin to drop, but only if starts do not continue in beast mode.

REBGV released their stats package through September 2017. Here are the numbers: 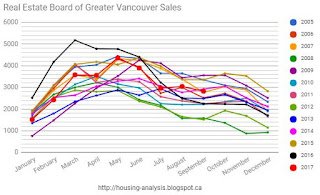 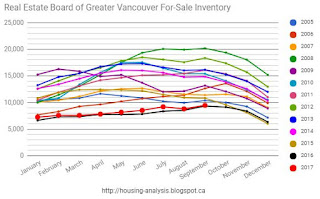 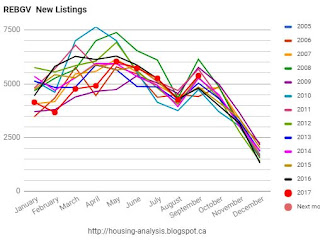 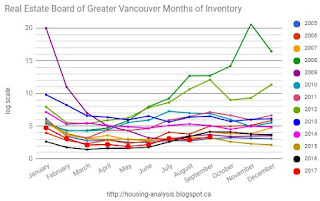 Sales have retrenched  and remain decidedly "average". Inventory is low. The result is a low but slowly increasing MOI (months of inventory). A long stretch of robust (or at least not pallid) new listings is still required to allow inventory to recover: new listings have returned to the point where inventory recovery is slowly occurring. These things take time, apparently.