Yes Virginia, There is a Housing Bubble

Yes Virginia, There is a Housing Bubble

A potentially significant ruling in the BC courts was released last week that could have some significant implications for home inspectors. The ruling is not long by legal standards but still pretty dry. Don't read it if you have a life. I read it twice. You can read the briefer press coverage here.

The suit was between a home owner (the plaintiff) who made an offer on a property in North Vancouver subject to inspection and hired an inspector (the defendant) for $450 to inspect the home, and write and present a report on his findings. This is pretty standard practice, especially with older homes, and especially especially with older homes with significant structural and leaking issues, which this particular property had, and was evident even by a cursory walk-through.

Long story short, the home inspector lost the case and was ordered to pay over 192 fat ones to the owners, covering the the majority of repair costs to the house. The house had significant structural deficiencies that cost significant money to fix. The fixes included compacting soil holding the foundation, rebuilding two decks, and reinstalling supporting post and beam members that had significant rot.

A few things were made clear by this case -- and it may still be appealed, not necessarily on the bill of the home inspector -- and I'll highlight a few points that we all should take seriously when buying a property.

1. The inspector was recommended by the Realtor

The first thing to note was that the inspector was recommended to the buyers by their Realtor. Certainly the Realtor purports to have his clients' best interests at heart yet the Realtor only gets paid if the sale completes. The inspector undoubtedly was recommended by this Realtor in other transactions so there is potential for conflict of interest. The judge did not us this fact in issuing the final decision. Still, ensuring the chances of a conflict of interest are minimized could have saved this case from happening at all.

2. Seeing what you want to see

While the blame was put solely on the inspector, I am suspicious the judge ruled against him partly because of his conflicting testimony under oath. The judge made, in my opinion, a slightly bizarre determination that the buyers put significant faith in the inspector's report, enough to believe the repair costs were on the order of $20K, not the eventual $200K. I'm not a lawyer so cannot comment on how the buyers' state of mind would influence whether negligence occurred.

If we think back to 2006 and the overall sentiment of the market, prices were increasing at close to 20% year-over-year. The house was purchased in the late spring, a typically strong month for sales. In those heady days, it was not uncommon for buyers to attend scores of viewings, make several offers on several properties, and if they're lucky have one accepted. With that as the backdrop to this particular purchase, I am suspicious the buyers put significant pressure on themselves to complete. Often we put blame on Realtors, inspectors, lawyers, and others in the industry, claiming they influence buyers to complete so the food chain gets paid. Well sure, but there still needs to be the obvious precondition to influence: the buyers allow it to happen, and some buyers' emotional states make influence all the simpler.

3. Will this change anything

I don't want to over hype this particular case -- it may have been a case of negligence without further implications. In the extreme we could imagine home inspectors, now wary of the chance of successful litigation against them, start hedging on the side of caution when writing a report. It could mean fewer sales as buyers get cold feet.

There is little in the way of standards for the home inspection industry. There are some standards and codes of conduct, however there does not seem to be wide acceptance they are adequate for all inspection scenarios. In this case, an "expert" home inspector testified how the baseline guidelines of one such association are considered inadequate for a proper inspection. To properly set up home inspection standards is a huge effort and, given the variance in homes across the country, it would be difficult to write down in standards form that completely encapsulates common sense and competence. I would expect such a standard is years off.

In the meantime we as potential buyers are stuck relying on ourselves to make a call on whether a house inspection makes sense. From what I've read in this case, it did not. In the heat of buying frenzies -- and we are in the midst of one now -- it is important to be extra cautious when we know our emotions are involved. It also highlights the risks involved in home purchases and why carrying costs, on average, should have a healthy margin of error.
Posted by jesse at 11/20/2009 11:30:00 AM 3 comments:

File this article under: "No Shit Sherlock" and to beat all it is significantly worse in Vancouver.

Low interest rates have caused some Canadians to act "irrationally" in the housing market, potentially taking on too much debt that could lead to economic difficulties down the road, says the president and CEO of ING Direct Canada.

"You have situations in some markets such as Toronto where people are making multiple offers for homes, they are paying thousands more and waiving conditions. It gives me concern they may not be thinking rationally, and this could lead to problems," Peter Aceto said in an interview Wednesday.

"Canadians are also paying their homes off slower and slower, and the concern for me is that they are buying more house than they can really afford."

Aceto said he is so concerned about the market that he has instructed staff to advise customers not to go with longer-term amortizations if they can help it. More than 50 per cent of all mortgages in Canada this year were amortizations longer than the standard 25 years, says Aceto.

As a result, the lender said he is worried that some consumers are biting off more than they can chew.

"It's almost as if Torontonians feel very concerned they are missing something with such low rates." said Aceto. "The problem is: can they afford to pay for their mortgage five years from now, when interest rates go back up?"

Sales of existing homes in the Toronto area were up 64 per cent in October from the same time last year, while average prices hit a record $423,559, up 20 per cent. Bidding wars have become common in choice neighbourhoods.

Bank of Canada Governor Mark Carney has already expressed concern that an asset bubble may be forming. And other financial community heavyweights such as CIBC World Markets senior economist Benjamin Tal told the Star last week that consumers are "blinded" by low interest rates.

However, Aceto is the first bank president to express concern over the housing market.
He acknowledged that his comments will likely not be popular with money lenders since he is also in the business of selling mortgages. "What I do know is that we shouldn't be focused on the short term," he said

"We shouldn't be interested in just selling mortgages to get our numbers up for the next quarter. If banks help our customers make the right financial decisions, then we will have a healthy and happy consumer and economy. It just makes sense."

Aceto's former job at ING was chief risk officer. He spent two years in California during the height of the real estate bubble, and felt that Canadians would not be as spendthrift as their American counterparts. But when he arrived back in Canada he was surprised to see that some consumers were acting in a similar way.

"Canadians have been proud internally that we're very different than the Americans in the way we behave in terms of our spending habits and the way we deal with credit. But over time we have become a lot closer than we think," said Aceto.

For consumers with 35-year amortizations, which ING sells, he advises that they accelerate their payments.

Despite his concerns, Aceto maintained that the Canadian economy is in much better shape than the U.S., where zero-down and longer amortizations created a massive housing bubble. And he said the Canadian government has done a good job in limiting long-term amortizations to 35 years.

Here are the updated charts for the Real Estate Board of Greater Vancouver area. 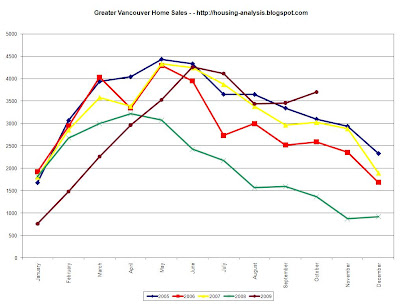 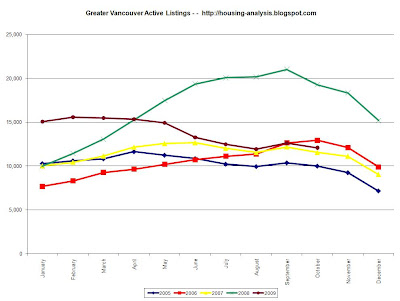 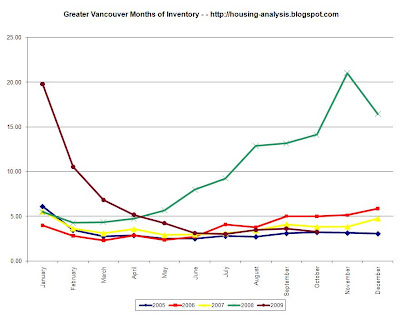 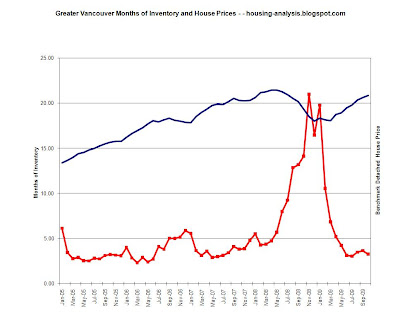 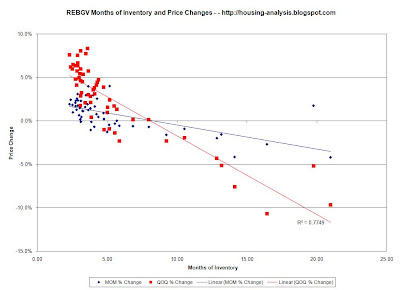 "While home prices have been rising in 2009, they have not eclipsed the peaks reached in early 2008," Scott Russell, Real Estate Board of Greater Vancouver (REBGV) president said. "We're coming off several months of unseasonably high sales levels, which has allowed for a gradual increase in home values this year,"

At 12,084, the total number of property listings on the MLS® decreased 4.1 per cent in October compared to last month and declined 37 per cent from this time last year.