City of Vancouver Permit Update for 2010

I have been producing some graphs starting in early 2009 showing the trend of permits in the City of Vancouver (here and here). Here is an update to December, 2010. 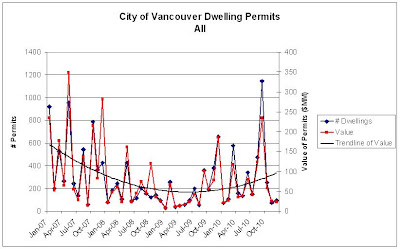 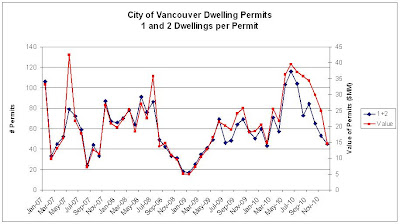 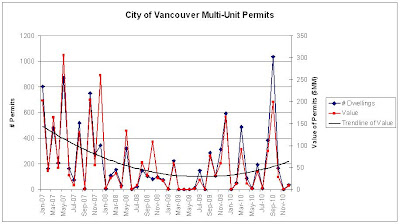 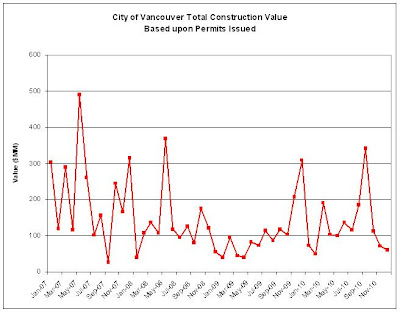 1. There was a significant, though not full, rebound in multi-unit permits in late 2009 and into 2010. This is commensurate with the rebound in construction employment coming out of the recession.
2. The detached market is extremely hot right now. This is evident through significant price appreciation of detached-zoned lots in the City, notably (but not exclusive to) the west side.
3. Detached permits have been falling significantly since mid-2010. Seasonality in permit applications cannot be discounted; I would not be surprised to see detached permit applications rebound going into the first half of 2011. A builder friend of mine claims the City's permit office has a backlog it's working through.
4. The building recession in late 2008 through mid-2009 is now bookended.
5. The data presented here show what a severe housing recession looks like and hint at how dependent the City is on sustained permit revenue to fund its operations.
6. The permit data are coincidental with faltering sales, however the permit data are released with about a month's delay; sales are available with virtually no delay thanks to paulb over at vancouvercondo.info. It's worth remembering that with housing markets, prices are a lagging indicator.
7. Laneway housing continued its upward trend. Builders and the permit department are likely becoming more familiar with the process and relevant codes (and likely fine-tuning it as they go). I would expect to see a continued increase in laneway housing permits, barring any major pullbacks in the availability of credit.
Posted by jesse at 1/28/2011 10:12:00 PM 3 comments:

Related Document:
Backgrounder: Supporting the long-term stability of Canada’s housing market
The Honourable Jim Flaherty, Minister of Finance, and the Honourable Christian Paradis, Minister of Natural Resources, today announced prudent adjustments to the rules for government-backed insured mortgages to support the long-term stability of Canada’s housing market and support hard-working Canadian families saving through home ownership.
“Canada’s well-regulated housing sector has been an important strength that allowed us to avoid the mistakes of other countries and helped protect us from the worst of the recent global recession,” said Minister Flaherty. “The prudent measures announced today build on that advantage by encouraging hard-working Canadian families to save by investing in their homes and future.”

“The economy continues to be our Government’s top priority,” continued Minister Paradis. “Our Government will continue to take the necessary actions to ensure stability and economic certainty in Canada’s housing market.”
The new measures:
Our Government’s ongoing monitoring and sound underlying supervisory regime, along with the traditionally cautious approach taken by Canadian financial institutions to mortgage lending, have allowed Canada to maintain strong and secure housing and mortgage markets.
The adjustments to the mortgage insurance guarantee framework will come into force on March 18, 2011. The withdrawal of government insurance backing on lines of credit secured by homes will come into force on April 18, 2011.
Posted by mohican at 1/17/2011 08:52:00 AM 3 comments:

Psychology of a Bubble

I stumbled upon this excellent post on the Irvine Housing Blog.
I suggest reading through when you have a few moments to review some of the important markers of a bubble market, how people rationalize purchasing in a bubble, and how it always ends.
Here is a great quote and some useful visuals:

The efficient markets theory does explain the behavior of asset prices in a typical market, but when price change begins to feedback on itself, behavioral finance is the only theory that explains this phenomenon. There is often a precipitating factor causing the break with the normal pattern and releasing the tether from fundamental valuations. During the Great Housing Bubble, the primary precipitating factor was the lowering of interest rates. The precipitating factor simply acts as a catalyst to get prices moving. Once a directional bias is in place, then price-to-price feedback can take over. The perception of fundamental valuation is based solely on the expectation of future price increases, and the asset is always perceived to be undervalued. There are often brave and foolhardy attempts to justify these valuations and provide a rationalization for irrational behavior. Many witnessing the event assume the “smart money” must know something, and there is a widespread belief prices could not rise so much without a good reason. Herd mentality takes over. 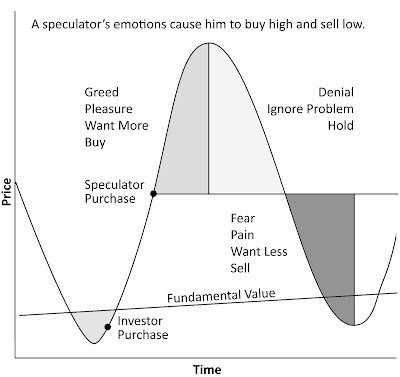 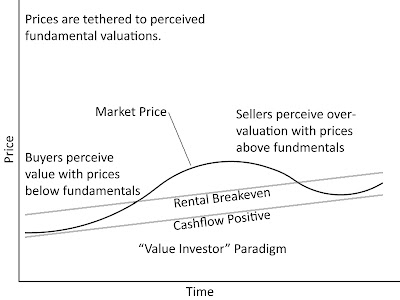 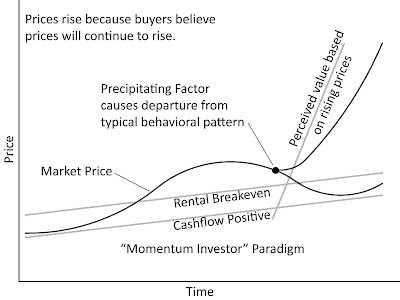 I've compiled a graph of sales in the REBGV (Real Estate Board of Greater Vancouver) over the past 12 years. 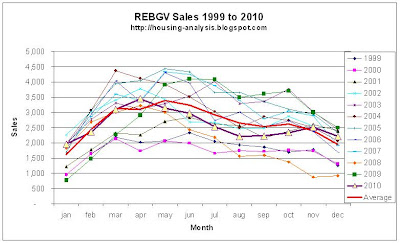 2010 was a below-average year for sales but not significantly so. As with 2009 there was a surge in Q4 sales that helped muster some respectability to the sales levels. 2011 starts anew; as a friend from Australia recently commented, the markets in Canada and Australia are drifting into uncharted waters.