REBGV released their stats package through December 2018. Here are the numbers: 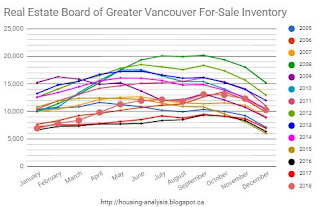 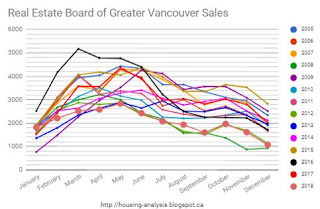 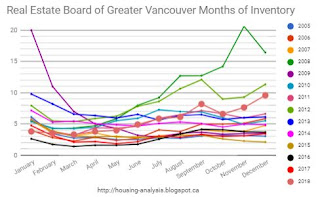 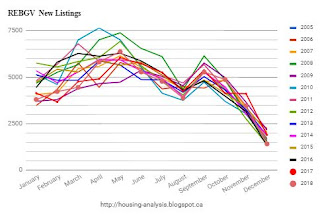 Sales have mimicked 2012 in the last "downturn", the difference being that inventory is still rather low, leading to a lower months of inventory than that year. Inventory is normal-ish again, after being torched in 2015 and 2016. Here are two price graphs, the first is the scatterplot of 6 month index changes versus months of inventory (6 month changes are -7.0%), and year-on-year price changes, which are negative, as they were in 2012. 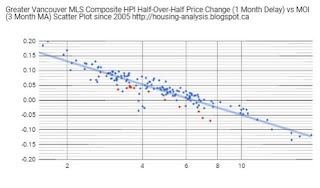 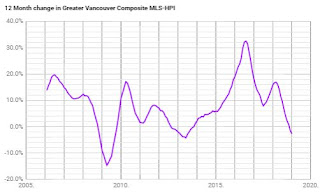 2018 was an interesting year - sales were weak for a few reasons, the two most pertinent in my view are what appears to be tighter controls on mortgage approvals, and at the higher end of the market demand is very weak. Inventory ended the year in the historical range, and could increase further in 2019.

For what my predictions are worth (looking back I was mostly correct about 2018 but a bit optimistic), I expect further inventory growth in 2019. Completions will likely accelerate in 2019 and will eventually find their way, either directly or by spawning sales of existing properties as people move, into the MLS market. This should be helpful to contain upwards trends in prices.

Prices are strong at the beginning of the year -- most years see prices, as measured by the MLS-HPI, rise in the first half, even in terrible years; conversely if prices are to be weak in the year, most of the price drops occur in the second half. We certainly saw prices drop in the second half of 2018 and this has provided a slightly lower starting point for the 2019 prime spring selling season. If prices are to be weak in 2019 on a year-on-year basis, expect meager price gains (probably not negative, but you never know) in the first half.

More broadly, we are a decade away from the last recession, and I wouldn't be surprised if we are due for another one in the next five years. If this is to occur, it is looking like there is a possibility that Vancouver could be caught on the wrong side of an oversupply during the advent of a recession and that could lead to more significant distresses in terms of sales and inventory, and the effects of this could linger longer than most are expecting. Nonetheless, Vancouver is a growing metropolitan area and land will always be scarce. I foresee no particular reason to think that a prolonged housing recession will last more than a handful of years, though those years could be painful.