Well, we've had a couple days to let that partial yet massive list of projects sink in so now let us look at some data and charts to illustrate the point further. The point being that BC not only has a housing bubble but a construction bubble fueled by loose lending and speculation in the residential sector and by government largesse in the non-residential sector. Hat tip to van_coffee for the data - thanks. 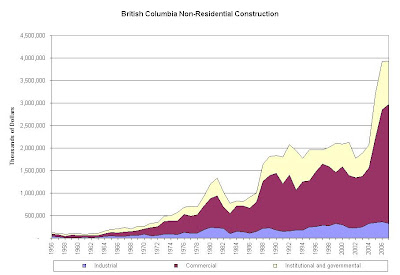 Build those strip malls. I'm not exactly sure how the statisticians classify projects but we can see from the previous couple of posts where the bulk of the non-residential construction spending is going. Many government projects like the trade and convention centre are likely classified as a commercial project although it is in fact a government project.

This chart illustrates the value of building permits issued when adjusted for inflation and population. 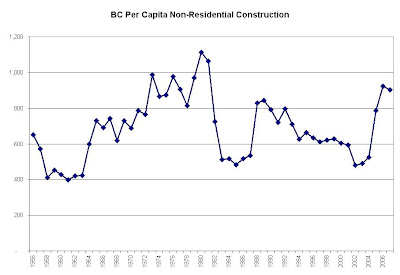 Please not that these numbers DO NOT include the massive infrastructure projects that are happening and worth upwards of $5 Billion in the Vancouver area alone.
Posted by mohican at 5/28/2008 08:21:00 AM

What is stunning about the first graph is how it illustrates the stagnation of industrial investment in BC since 1980, regardless of the government in power, If those figures are nominal (the graph doesn't say) it's actually a real decline.

BC's "golden decade" is fool's gold. We are just a smaller counterpart of the US, fueled by both public sector and consumer borrowing.

I find it very interesting that there is no upward 'pop' on this chart coinciding with Expo '86. Of course the Olympics are much bigger in scale, but if an expo can't influence this chart, then something bubblicious other than the Olympics must be happenning.

(Vancouver built a Skytrain back then as well, is this time special?)

Interesting New York Times article about renting vs. owning. In comparison the place I am in at the moment is 31.2 which is near the peak of the bubbliest US markets.

I am pretty certian that the building permits numbers do not include infrastructure projects like skytrain, bridges and highways otherwise we would see massive numbers in the mid-80s (skytrain, alex fraser bridge, coquihalla hwy) and even higher current numbers.

patriotz's point about public sector borrowing is a good one. When you see balanced budgets from the provincial government that doesn't mean they aren't taking on debt in their capital spending account.

Pondering: Great link to the NYT article. Question for you / anyone that may have a view on this: the author acknowledges the benefits of interest tax deductions in the US - any idea how Canada's lack of equivalent tax deductions would affect the interpretation of the ratio? I realize that the ratio would be calculated the same way in both countries (purch price / annualized rent), but if I'm not mistaken, the impact of a ratio of 31 in Canada should be worse than a 31 in the US as we don't get the same tax benefit.

It shouldn't actually make any difference, because the tax treatment of interest is the same for investors in both countries, and investors are the marginal buyers - the ones who sit at the intersection of the supply and demand curves.

The interest writeoff in the US for owner-occupiers (which doesn't net out as a benefit for everyone BTW - some are better off just taking the standard deduction) - increases their consumer's surplus, because they're getting a deduction on the interest but the imputed rent is not taxable.

What does make a difference to the equilibrium multiple is property taxes, which are a lot higher in some jurisdictions than others. The higher the taxes, the lower the multiple. There is a lot of variation in property taxes within both the US and Canada.

Thanks patriotz - I hadn't thought of it that way.

Patiently waiting posted a link to these BC EI stats on my blog. Interesting that during this boom EI claims have grown over the last year in BC - every other province saw a decline in EI claims.

I assume this is due at least in part to the forestry downturn - kind of scary to think what support our economy has left once all this construction is moved through the pipeline.