Ubergeek Post - On Price Changes and Months of Inventory in GVREB

Thanks to mohican’s previous work finding correlations between months of inventory and %changes in GVREB benchmark price, I was inspired to take it to the next step. This post concentrates on mohican’s and my further analysis to attempt to find an even better fit of months of inventory to changes in price and, as you will see, a weak but plausible predictor of future price movements. A word of warning this post is a bit technical and geeky, but not enough so (in my opinion) that it will be difficult to understand. 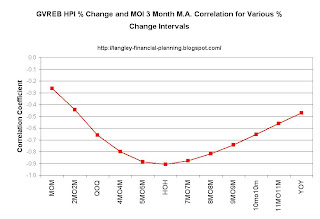 One can see here that the HOH (6MO6M) % change values have the highest correlation with the 3 month moving average of MOI. Plotting on the scatter plot gives a better idea of how the correlation matches a true linear regression: 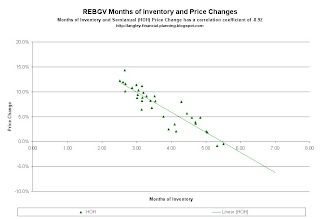 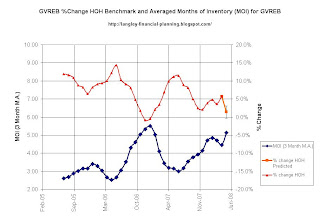 The above analysis gives a slightly more certain result of price movements compared to the QOQ and MOM versus non-averaged MOI linear regressions.

The same method can be further expanded by performing cross correlations on the data. Here we experimented with various MOI moving averages but, as you will see, having an unfiltered MOI produces some neat results. The %XMOXM change in price is cross-correlated with raw MOI. The results are displayed in the contour graph: 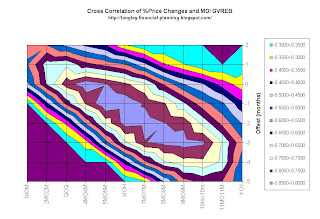 One can see that 4MO4M % change is a maxima at an offset of 0 months, as expected. But notice a correlation maxima at -3 months offset at 9MO9M. The cool thing here is that we are effectively finding a correlation of current MOI with 9MO9M price changes 3 months into the future. The graph below better illustrates the relationship: 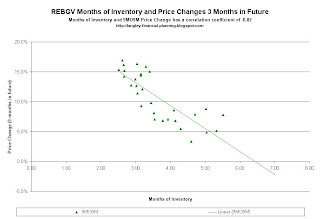 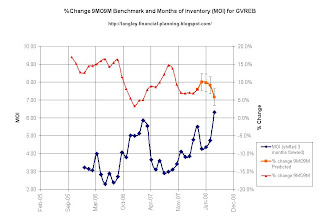 One can see the relationship is not as strong as the HOH-MOI correlation. However this level of accuracy is approximately the same as the QOQ plot versus MOI. The reason MOI must be raw is that any averaging will intuitively reduce the ability to predict farther into the future. Further work around using seasonal adjustments to produce better fitting is possible but I am neither versed in seasonal adjustment techniques nor do I want to fiddle with the data as it stands too much, no knock against Statscan or NAR implied.

We should note a few things about the analysis and data used here:

Interestingly I tried adding an inflation factor to the benchmark price and the data became less correlated. Draw your own conclusions here. mohican did a quick fit to FVREB data and got similar results. Further work could be done examining US markets (using CS HPI) to see how such analayis compares especially after 2 years of falling prices.
Posted by jesse at 5/20/2008 10:45:00 PM

That is a great post jesse. Thanks for your hard work in coming up with some really neat thoughts around ways to use the data to indicate price direction with some known level of certainty.

One thing we must be careful of is exactly what jesse alluded to - we only have price and inventory data for a relatively short 3 year boom period and time will tell how a bust period causes the correlations to change.

Interesting! Thanks for posting this, Jesse.

I was interested in seasonal adjustments to show that rising prices in the spring do not necessarily mean that the market is booming or even recovering in Edmonton.

Here is seasonal adjustment method I was using. I am not a stats expert so it may not be 'hardcore' enough.

Haven't posted yet but there seems to be a correlation between seasonality and price changes in Edmonton at least. From an earlier post:

bearclaw, thanks for the info. Seasonally adjusting using your cited method requires more data than I have for GVREB to be meaningful. I too am not a real statistician.

Perhaps what you can take away from the proposed model is that it takes 3-4 months of high MOI to start putting a downwards pressure on prices. I think this makes sense as listings start to sit and sellers start to get antsy. We'll see.

Great work Jesse! I assumed it was a guest post from VHB. Very cool.

I fear things may take a dramatic turn in the coming months.

The "Vancouver’s different" theory is being put to a test. A realisation that we CAN correct could spur a rush to the exits in condos unlike anything we have seen thus far.