Good afternoon,
The Real Estate Board of Greater Vancouver released the data pertaining to the local market for the month of April with the obligatory 'toot - toot' and press release printed in the local rags. Here is the press release:
VANCOUVER -- Sales edged down and new listings took another big jump during April in Greater Vancouver's real estate markets, although so-called benchmark prices remain higher than they did a year ago, according to real estate board figures.
The Real Estate Board of Greater Vancouver reported 3,218 sales through the Multiple Listings Service, a five-per-cent decline from the same month a year ago. New listings added to inventory were up almost 26 per cent to 7,010, although board president Dave Watt, in a news release, said homes, on average, took six fewer days to sell than in April of last year. "Residential sales continue to be strong, but there is a lot more choice on the market today," Watt added.

The benchmark price of what is considered to be a typical detached home on the board's housing price index was $771,321, up 11 per cent from April a year ago. For townhouses, the $477,900 benchmark price was up 1.05 per cent from a year ago. For condominiums, the benchmark was $389,070, up 9.6 per cent a year ago but down slightly from the previous month.
Average prices for detached homes and apartments, however, were both down from the previous month. In April, the average detached home across the region was $880,844 in April compared with $919,593 in March. The April average for townhouse prices was $509,809, down slightly from $510,428 in March.
This release in indicative of a 'balanced market' very similar to last month although many signs point to big moves ahead of the negative price action variety. With the current rate of increase in the active inventory and the lower level of sales it is only a matter of time before sellers cut prices to attract buyers.
Here are the visuals. 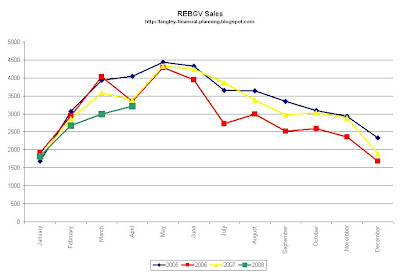 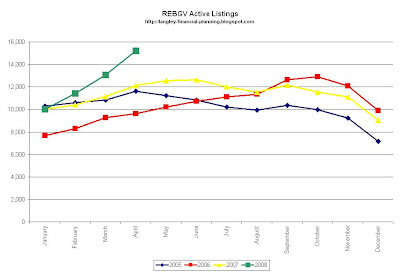 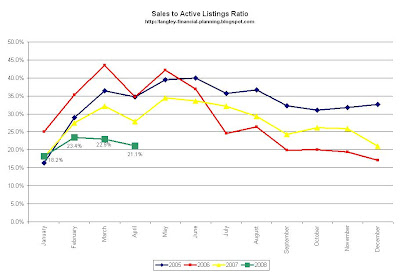 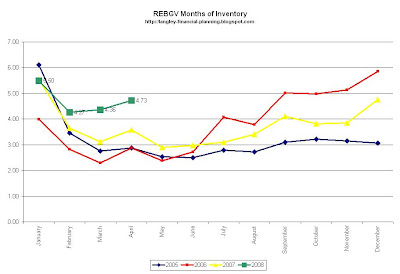 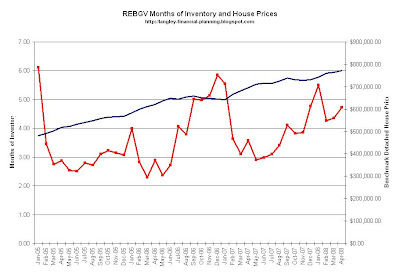 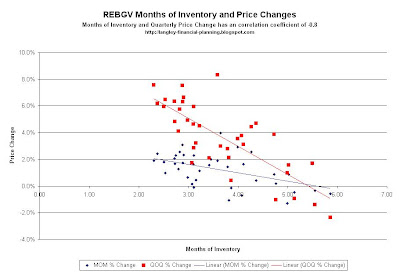 We will know the market has turned when the sales drop off a cliff. Sales are still surprisingly strong although lower than previous years. The switch from 'balanced market' to bear/buyers market will arrive when sales drop in the 25%+ range.

Represents around a 4% drop in the average price month over month for detached housing. Not insignificant. However, if the REBGV was publishing their daily or weekly data( I recollect from Paul B's website) it would have shown that prices peaked around the $975,000 mark in March. That would represent approximately a 10%retracement in prices! Given the parabolic curve of the average price graph over the last 4 or 5 years, I think we are witnessing the blow-off top of this bull market.

I was at the Real Estate Forum in Vancouver this week. This is the big event of the year for the real estate industry, with all the big players in the development industry in attendance. It was a decidely gloomy affair, by its normally upbeat confident standards ( in recent years at least), with comments from some of the more candid major players, about the market( both commercial and residential) having ground to a halt over the last 60 days. Reasons identified, were the tightening of lending practices to both developers and consumers, and a change in market psychology.

I heard an interesting comment from a major residential developer (Bosa) that they had totally underestimated the number of speculators who had purchased into their condo developments. The true number, which was shocking, was only evident following completion of the buildings. To use their words "the elevators were hardly being used".

We're shocked - shocked - by the number of sales to speculators.

"The smart money buys early". Now where did I hear that line? Appealing to speculators? Perish the thought.

Reasons identified, were the tightening of lending practices to both developers and consumers, and a change in market psychology.

But we just can't bring ourselves to talk about what really matters - the prices, can we?

Hey guess what I found!

The FVREB released their stats on their website, even though they haven't officially announced it or put out the press release, if you put in this direct URL you can download it:

For SFH there's a slight decline in average and HPI, median is up.

Overall things look flat except for listings which are going through the roof.

FV that is - thanks Jordan.