The Canada Mortgage and Housing Corporation keeps accurate statistical records of the housing market activity across the country and here is a collection of that data for the Vancouver Census Metro Area up to November 2008 (pdf). The chart shows the number of housing units started in the past 12 months (red), completed in the past 12 months (yellow) and the number of housing units under construction (blue) at any point in time. Click the chart to make it bigger. 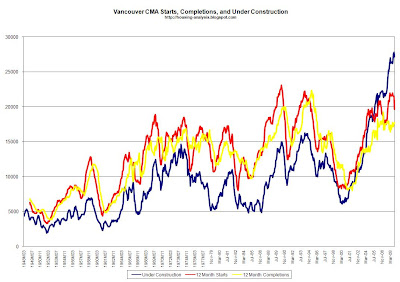 Several interesting things pop out to me as I observe this chart and the data underlying it:
1) We are currently in a very large building boom.
2) There have been several boom cycles in Vancouver's history
3) The current cycle has born witness to a statisical occurence that has not happened in any previous boom cycle - the number of units under construction has far exceeded the number of starts or completions.

This last observation could be for a variety of reasons:
1) More multi-unit projects which take longer to complete - has that really changed so much since the 90s?
2) A shortage of labour - why start so many projects if developers don't have the labour
3) The prevalence of the pre-sale contract which allows the developer to pass on a portion of the financial risk to the pre-sale buyer and thus no rush to complete when you already have buyers locked into a contract. Why not start more projects so you can lock in more pre-sale buyers and then take a long time to complete because you have too many projects on the go. Seems like a recipe for success from a developer standpoint. The issue then becomes what happens when all developers proceed down this path and a systemic problem creeps into the system with that systemic problem being gross oversupply. Add in the unprecedented level of speculators taking part in pre-sale contracts and we are now just seeing the tip of the iceberg of what happens to a local housing market when these things converge.

Looks like we're at about 28,000 units under construction right now.

If the past holds true, and we end up with ~5,000 units under construction when it all shakes out, then that would suggest that up to 80% of the current construction employment could dry up...

Or to look at it from a less bearish position, if the number of completions is at 17,000 right now, and at the bottom it'll be at 8,000, the numbers would suggest that at least 50% of the construction jobs will dry up.

I think those back-of-the-envelope calculations are about right.

The local economy is headed for some extremely dire times in the next couple years.

Which are the greater fools: those poor suckers who pulled their properties off the market to re-list in the spring, or the poor dummies still thinking of buying into this market?

The latter are a dying breed and maybe extinct after clueing into the gloom and doom and mounting job losses. The former will get the shock of their lives when inventory shoots up next year with all those new completions.

Here's another back-of-the-envelope calculation regarding the ownership rate:

From Mohican's post on Dec 4, in the Vancouver CMA...

What happens if the ownership rate flatlines from here? That's 6700 fewer sales per year. At current sales rates, that's 7 months worth of sales.

What if the ownership rate starts to retreat, as seems to be happening in the US?

"Which are the greater fools: those poor suckers who pulled their properties off the market to re-list in the spring...

There still seems to be alot of optimism out there. Many people I have spoken with still believe that there will be a spring turnaround and have pulled their homes off the market, waiting to re-list at that time. The problem for them is that so many other people have the same idea. I would watch for a huge increase in listings this spring.

Is this city delusional or what? The people in the US doing the same thing two years ago were at least looking at an economy that still appeared to be in good shape, not the biggest global downturn since the 30's.

This city is in for a major reality check and it's going to get it within the next year, just in time for you know what.

I was talking to a contractor yesterday who thought a recovery would happen in the spring, because Gordon Campbell is allowing 6-storey condos to be build as opposed to the usual 4-storey wood frame condos seen today. Go figure.