I recently posted about the CMHC data released for November 2008 and I wanted to revisit the statistics again because of a couple data errors and a desire to have a thorough examination of the facts.  Here is how things stand according to the CMHC Housing Now released this morning. 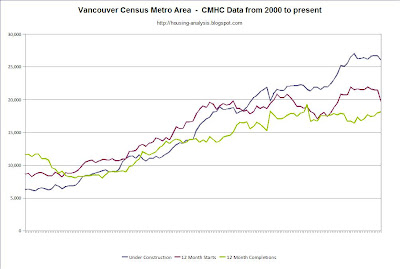 Starts=973? Yikes, that sounds collapse-worthy. 12 months of starts like this add up to under 12,000 units per year being started. Yep, the crash is certainly getting started!

...Incidentally, I was talking to a friend last week. He's a subcontractor, and his residential new construction work has just about dried up-- he's OK because his industrial work is going fine, but he's got concerns. He tells me that Onni has frozen a number of their projects of late.

Are you are being deliberately optimistic regarding future starts and unabsorbed units?

12K for the former and 4K for the latter seem awfully generous to me. An inversion of those numbers looks a lot closer to the eventual (within ~1-2yrs) outcome, given the unprecedented pipeline of inventory.

mechie - the predictions I posted are for the year 2009 only. Things will probably get much worse in 2010. I could see starts getting well below 10k and not absorbed units going well above 6k and likely higher.

There are only about 300,000 SFH’s in Vancouver, so how will a falling start be good for housing prices? That is if the number of international immigrants, international students, and foreign workers continue to rise. http://www40.statcan.ca/l01/cst01/
famil124g-eng.htm


According to the Vancouver Sun, salaries exceeding $200k are on the rise for many sectors. So more locals can now afford to pay more for housing.

milo, you have successfully identified about 100 people that have 6 figure salaries. What about the other 1MM or so salaries out there. Median prices and median incomes tell the full story. Government salaries are always oblivious to the fates of the rest of the populous but, that said, it's worth remembering where the monies for their salaries originate.

This new volume provides a theoretical and empirical perspective on the value, potential and contribution that qualitative research methodologies bring to the analysis of housing policy issues within an international context. This encompasses key housing issues, including: the meaning and significance of home; homelessness; resident participation; housing renewal and gentrification; socially mixed housing communities; Irish Gypsies; and post-apartheid housing policies.Toronto Lofts