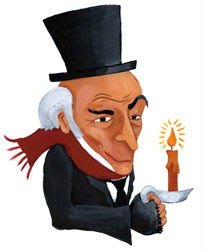 In praise of misers.
By Steven E. Landsburg
Here's what I like about Ebenezer Scrooge: His meager lodgings were dark because darkness is cheap, and barely heated because coal is not free. His dinner was gruel, which he prepared himself. Scrooge paid no man to wait on him.
Scrooge has been called ungenerous. I say that's a bum rap. What could be more generous than keeping your lamps unlit and your plate unfilled, leaving more fuel for others to burn and more food for others to eat? Who is a more benevolent neighbor than the man who employs no servants, freeing them to wait on someone else?
Oh, it might be slightly more complicated than that. Maybe when Scrooge demands less coal for his fire, less coal ends up being mined. But that's fine, too. Instead of digging coal for Scrooge, some would-be miner is now free to perform some other service for himself or someone else.
Dickens tells us that the Lord Mayor, in the stronghold of the mighty Mansion House, gave orders to his 50 cooks and butlers to keep Christmas as a Lord Mayor's household should—presumably for a houseful of guests who lavishly praised his generosity. The bricks, mortar, and labor that built the Mansion House might otherwise have built housing for hundreds; Scrooge, by living in three sparse rooms, deprived no man of a home. By employing no cooks or butlers, he ensured that cooks and butlers were available to some other household where guests reveled in ignorance of their debt to Ebenezer Scrooge.
In this whole world, there is nobody more generous than the miser—the man who could deplete the world's resources but chooses not to. The only difference between miserliness and philanthropy is that the philanthropist serves a favored few while the miser spreads his largess far and wide.
If you build a house and refuse to buy a house, the rest of the world is one house richer. If you earn a dollar and refuse to spend a dollar, the rest of the world is one dollar richer—because you produced a dollar's worth of goods and didn't consume them.
Who exactly gets those goods? That depends on how you save. Put a dollar in the bank and you'll bid down the interest rate by just enough so someone somewhere can afford an extra dollar's worth of vacation or home improvement. Put a dollar in your mattress and (by effectively reducing the money supply) you'll drive down prices by just enough so someone somewhere can have an extra dollar's worth of coffee with his dinner. Scrooge, no doubt a canny investor, lent his money at interest. His less conventional namesake Scrooge McDuck filled a vault with dollar bills to roll around in. No matter. Ebenezer Scrooge lowered interest rates. Scrooge McDuck lowered prices. Each Scrooge enriched his neighbors as much as any Lord Mayor who invited the town in for a Christmas meal.
Saving is philanthropy, and—because this is both the Christmas season and the season of tax reform—it's worth mentioning that the tax system should recognize as much. If there's a tax deduction for charitable giving, there should be a tax deduction for saving. What you earn and don't spend is your contribution to the world, and it's equally a contribution whether you give it away or squirrel it away.
Of course, there's always the threat that some meddling ghosts will come along and convince you to deplete your savings, at which point it makes sense (insofar as the taxation of income ever makes sense) to start taxing you. Which is exactly what individual retirement accounts are all about: They shield your earnings from taxation for as long as you save (that is, for as long as you let others enjoy the fruits of your labor), but no longer.
Great artists are sometimes unaware of the deepest meanings in their own creations. Though Dickens might not have recognized it, the primary moral of A Christmas Carol is that there should be no limit on IRA contributions. This is quite independent of all the other reasons why the tax system should encourage saving (e.g., the salutary effects on economic growth).
If Christmas is the season of selflessness, then surely one of the great symbols of Christmas should be Ebenezer Scrooge—the old Scrooge, not the reformed one. It's taxes, not misers, that need reforming.
Another Scrooge Analysis.
Posted by mohican at 12/19/2007 09:56:00 AM

It's funny, but it overlooks a keystone economics which is that cooperative enterprise generates more wealth than individual enterprise. What is more, in a free market society, the transit of money generates opportunity. Without wanting to say bah humbug, it's basically all wrong.

Is Goofy a dog?

I enjoyed this. Yes, it is over-the-top but that's OK since it makes a point. Maybe those who consume a lot of resources especially non-renewables might be more appropriately called greedy than someone who lives very modestly and invests? Even a Marxist I showed this to agreed it was a good read :-)

It also relates to the story of certain gangsters (and other show offs) who were reputed to light their cigars only with $100 bills. This is not wasteful, but a donation to all holders of the currency.

I don't think the tale holds up economically, but it does point out some of the flaws in the black and white Dickensian world. Corporations and their officers are favorite scapegoats for everybody from Michael Moore to Saturday morning cartoons. It is done so much that we all collectively have contempt for the business world in general. Clearly this is a bit like looking a gifthorse in the mouth, because corporate enterprise has been a large contributor to our hefty standard of living.

Its undeniable that capitalism is the way to go in terms of increased living standards and the advancement of the human race. It works because people are basically selfish jerks.

However a functional welfare state is still an important piece of the puzzle. Unregulated capitalism would ruin us all.

I think Canada has a better balance than the US. YMMV.

Indeed, Americans have taken overconsumption to an extreme with their SUV driving, McMansion living and child spoiling.

This will come back to haunt them.

However a functional welfare state is still an important piece of the puzzle. Unregulated capitalism would ruin us all.

Well, I would argue that it would be in the interest of capitalism to regulate itself. In other words, the redistribution is voluntary, not coerced. That was of course not always the case, as history is littered with robber barons, whose excesses still bias our points of view against business in general.

Spontaneous redistribution doesn't happen very often. Taxation is an effective way of reminding people to chip in towards the common good.

It's been proven that the more someone earns the lower the percentage of their income that is given to charity.

Spontaneous redistribution doesn't happen very often. Taxation is an effective way of reminding people to chip in towards the common good.

Well, taxes are reasonable efficient way to equitably pool money for redistribution. If it is well spent, the respective tax payers actually get a "return". In other words, it can be viewed as an investment.

Hence I argue that high income earners would rather pay taxes than not, as long as all others were expected to do the same. The problem with "voluntary" or spontaneous redistribution is the free rider problem.

The problem occurs when taxes are excessive or inefficiently spent.

There is also a short-term/long-term problem. I can see that well-spent taxes are to my advantage long term. I work in the legal system and, without the courts, I would have no job. But right at the moment, I am working on a down payment and trying to buffer myself against a coming downturn, so I am not inclined to pay much in the way of taxes this year, even if I expect them to be well spent. I'd prefer to put off paying taxes for a year or two. I bet lots of people feel the same way. I appreciate the government playing the role of a forceful financial adviser and reminding me that it is in my best interest to pony up this year too.