The insanity continues for another month. The activity level of sales is astonishing at current prices and mortgage rates. Clearly, some people have a lot of money or they can borrow a lot.

“Affordability is a key question,” Naphtali says. “Our data indicates that about 60 per cent of residential homes purchased in November were multi-family, which includes condos and townhomes. The benchmark price for a condo in Greater Vancouver is about $375,000. However, there are units available for considerably less than this price. For example, the benchmark for condos in Port Coquitlam in November was $243,624; in Maple Ridge, $254,703; and in Coquitlam, $283,830.” 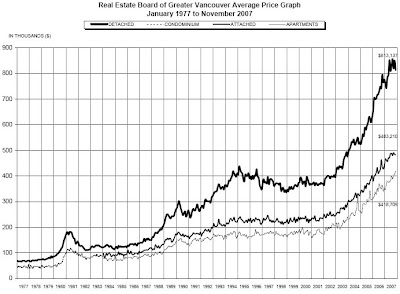 Some data points that were not mentioned in the press release are that annual appreciation in the outer suburbs of Coquitlam, South Delta, Port Moody, Maple Ridge and New Westminster is decidedly lower (in the 7% range as opposed to the 12% range cited in the press release). This is in line with my postulation that market softness and subsequent price declines will show up in the suburbs first and move from the outside in. This is why I watch the FVREB release more closely than any other data. This outside-in movement has been typical in the bubbly US markets.
Posted by mohican at 12/05/2007 09:55:00 AM

I don't know anyone who is seriously looking at real estate anymore. A year or two ago, I did know quiet a few people in the market (whether they bought or not).

Who the heck is buying at these prices? Not anyone I know.

There are times when I suspect the entire market is now just a few thousand highly-leveraged nutcases trading properties back and forth.

I don't know any FTBs anymore. But I know a few who in the past six months have 'upgraded'; one into the VGH area because the prices there are "set to take off when RAV is finished".

Well, at least they're near the hospital. That will come in handy.

FVREB numbers are now up. Mostly negative numbers MOM. YOY for SFH is now down to 4.9%.

"On home prices McCaughan says, “We are starting to see month to month fluctuations in price in all property types in all Fraser Valley communities although, as your REALTOR® will tell you, the overall trend in prices remains higher year over year.”"

I suspect mortage approval criteria are still quite relaxed. It will be interesting to see if the lenders will keep lending as openly into Canadian housing next year as recent years.

I think the people buying are still those will no real financial sense. Anybody with an ounce of knowledge about investing would be putting their money elsewhere for the short-medium term.

I agree, there's no way people are buying these places without the banks and lending institutions turning a blind eye to credit risk.