The Fraser Valley Real Estate Board released their monthly statistics package this morning and here are the goods.
The Vancouver Sun Story
The press release:
(Surrey, BC) – The Fraser Valley Real Estate Board reports more activity on the Multiple Listing Service® (MLS®) in November compared to 2006. The total number of sales processed through the MLS® in November was 1,327, an increase of 11 per cent compared to the same month last year when 1,194 sales were processed. “The market typically slows a little at this time of year, which is evident in the decrease in November’s sales and new listings compared to October of this year,” says Jim McCaughan, president of the Board. 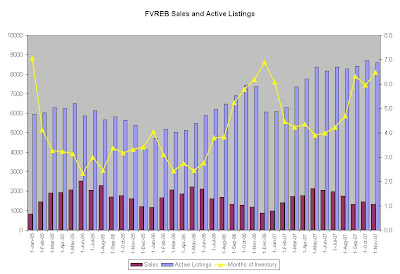 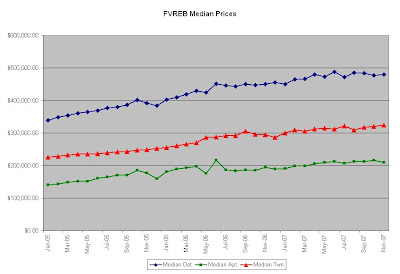 Median prices are mostly flat since the summer period. 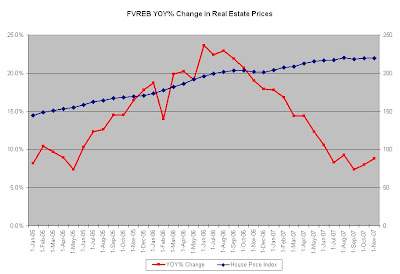 The quality and sales mix adjusted House Price Index is at the same level as late summer. The direction is lower right now but that could be just seasonal. Year over year price changes are much lower now than from the heyday of 2006. If US bubble markets are any indication, we should see negative year over year price changes 18 - 24 months after peak appreciation (this puts us in the January 2008 to June 2008 time period - January is not going to happen). 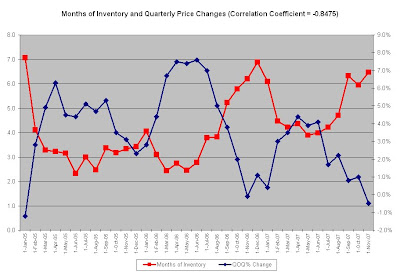 The inverse correlation gets stronger and stronger the more data I get. Months of Inventory is at 6.5 months right now and we have negative quarterly prices changes. If history is any guide this will happen 4 times out of 5.
Posted by mohican at 12/05/2007 12:01:00 PM

So its official, nothing in the FV gets you double-digit appreciation anymore.

If you bought the average FV condo a year ago, you made a whole $15,000 in appreciation. When you consider how much cheaper it is to rent, renters came out ahead. If they were investing the difference into GICs, even further ahead.

I would venture a guess that FVREB will be negative YOY by June with REBGV following 6-9 months behind.

I don't know any first time buyers anymore. The only people buying are trade up buyers and I think as the lack of FTB makes its way through the system the trade up market will dry up causing sales to plummet and listings to balloon.

Opportunity cost is the name of the game now. You can beat FVREB detached homes over the past year with a good GIC or money market fund. For the risk/return characteristics I'll take the GIC - - oh - that's right - I have!

When do you think the US will enter recession?

I just sold my place to a first time buyer. It sold pretty quick with two offers over list. Pretty surprising. I'm cashing out due to a career change and wouldn't be able to carry my payments with the new job.

I can tell you this though. If the LA writers strike isn't resolved in the next 2 weeks, there will be a whole bunch of unemployed home owners. The Film industry has almost completely shut down already and by jan, there will only be 3 shows filming in vancouver compared to 30. I know for a fact that many film workers own a shit load of investment properties. A lot of inventory coming down the pipe if that happens. And if the Strike is resolved in january, Most shows won't come back untill June.

Well, let's see about year over year neg. What was January 2007 SFH median? Look at Edmonton, 5.3% in a single month. When things back up, they really back up.

That would be a pretty big drop to fall into negative YOY by January.

What the heck happened in White Rock last month? SFH, Townhouse, and apartments are all down drastically.

Was there a bunch of lower priced units completed that month, or what else could cause this?

what else could cause this?

Maybe the high end has gone dead. According to the Victoria blog, the same thing is happening there - nothing over 1M is selling.

Perhaps the deep pockets are getting the message?

That would be a pretty big drop to fall into negative YOY by January.

It would require 3.2% drop in each of December and January.

Likely a change in the sales mix, and not a true drop in that sense. Not sure in which end this will start. In the U.S. the low end died first, which grossly inflated median prices, which were then trumpeted by the NAR as a sign of market strength. But when the liquidity crises killed jumbo loans, the median snapped back hard and the NAR cried that the median was affected by the sales mix. What asshats.

Freako said...
It would require 3.2% drop in each of December and January.

If you look forward to May/June next year, prices wouldn't need to drop at all over the next six month to give a negative YOY.

I have done some analysis of specifically Langley detached, and the trend is definatly not positive. The YOY increases have dropped from over 20% to only 1.1% now, and with a steep slope. It sure doesn't look like a very good area to buy into right now...

fencesitter - langley detached is already collapsing under its own weight as far as I can tell. This is an area where builders have built so much supply the market will not bear the supply with current prices.

Nice to see house prices back to March levels.

"Canada Mortgage and Housing Corp. doesn't do a market forecast for the entire Fraser Valley, McCaughan added, but it does compile one for the Abbotsford census area, which calls for 10-per-cent price growth in 2008.

Me, I'm keeping an eye on the second last chart in the FVREB stats package.

This is a great headline, but why read the paper when you can get your info right here, days in advance?

I can't say I fully understand this, but hopefully someone can read this and tell me it's just a bad nightmare. Unfortunately, What I do understand from that article worries me, greatly.

"But sub-prime is what is being focused upon to draw attention away from the fact the lenders and Wall Street banks made all loans too easy to attain for everyone. They can explain away the reason sub-prime loans are imploding due to the weakness of the borrower."

Bingo. The real problem, of course, is not the weakness of the borrower, but the inadequacy of the collateral - yield on collateral (rents) less than interest. Like, ahem, right here.