This is just a quickie post. I like statistics (though I'm very glad that I'm not a statistician), and last night boy did I ever find some interesting ones.

Here's GVRD's Regional Growth Key Facts site. Visit it, play with the numbers, and leave a comment as to what you see in them.

Here's what I noticed:
-GVRD 2001-2005 (inclusive) 5-year pop growth: about 130,000 people.
-GVRD housing starts in the same period: 80,000.
-In other words, 1.6 persons per housing start.
-From 1961 to 2001, on average for the GVRD the number of people living in each housing unit has been consistent, at about 2.6.
-This means there's about 30,000 excess housing units that have been started in the last 5 years. We've been building like we were in a population growth boom, except that the population isn't booming.

What do you read out of the GVRD's statistics? 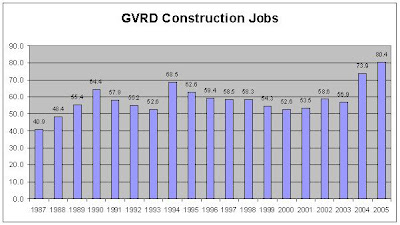 I think this is proof of rampant speculation. People are buying places and not living in them so they can easily flip them for profit. I think this also explains the tight rental market. Less suites are coming on to the rental market than they are building. Any downswing should start to force these onto the market for a double whammy. You can't sell for a profit and you can't get much rent either.

I would say that 60% of the people in my social/work circles own condo's as an investment. Most are calulating between 8-10% appreciation, some are looking for the quick flip. I have never been acquainted with this many people that speculate/invest in RE.

Not to mistakenly extrapolate too much from personal experience, but that seems a complete aberration from the norm.

Well, see, this proves to me that the market's NOT crazy. Have you seen some of those Yaletown condos? Obviously, they've been built so small because they're anticipating that only .8 of a person will live there! It all makes sense, now.

Those are amazing statistics.

Tulip Mania didn't migrate over from VHB so I'll get it in:

Damn straight rentingsucks, this definitely gives an indication of the massive amount of speculation in the marketplace, although these stats don't encompass the people who speculate with their primary residence, which I have always thought were a large part of today's sales.

The MSM has really downplayed speculation in Vancouver but this information is difficult to refute. Last year I recall they were using the 6-months-or-less flips as their indicator but I believe that's too short of a time period, especially with all the pre-sales over the last few years.

VHB presented similar data but this cuts to the chase. The long-term Vancouver average of 2.3 is fascinating because the number of 1-2 person units has been the primary growth area for the past 10 years, in terms of non-replacement units. In order to compensate, the number of people per house needs to increase in existing and replacement housing (presumably basement suites, larger families, or boarders).

To give an idea of the geographic distribution, you can break down the distribution by comparing constituencies. Here are the ppl/house breakdowns for Vancouver:

No surprises of course with Southeast Van having a higher density and Centre having lower density with all the highrises. It's almost as if city hall wants 2.3 as the number...

Those types of things are cliched sales rep talk. This stat cuts to the chase. If you build more units than the increase in increase in households, there are empty homes somewhere. If there are empty homes, current prices are NOT a true measure of demand for housing, but a vehicle for greater fool speculation. Much like the original tulipmania had little to do with gardening.

I'm pretty sure a sfh with a suite is two households for the household size stat. For starts, I'm not sure if it's counted as one or two. Anyone know? If it's only one, the issue may be even larger than what mohican has observed.

Also any condo dwellers out there that can support these stats anecdotally? Quiet hallways, half-empty parking lots, etc?

"For starts, I'm not sure if it's counted as one or two. Anyone know?"

This paper states (p 2) "Statistics Canada in its Census data does not recognize
secondary suites as a unique form of housing in its categories for housing type." Though someone should confirm the 06 census uses the same methodology. We can do a bit of guesswork. Think about the total number of suites in Vancouver and how that would change the 2.3 ppl/dwelling number.

On another related note, there are 2 dwelling stats, one for total private dwellings and one for private dwellings occupied by usual residents. In this case there are 280K and 258K for Vancity. This does not include WIP or unstarted. The 2.3 ppl/dwelling is derived from the second number. Here is the definition of a "dwelling" and I am inferring that "marginal" units are included though I do not know if suites are "marginal" or "regular" or not officially included. Also the 280K number includes both unoccupied and occupied by foreign/temp residents. I cannot find any data breaking the unoccupied and foreign/temp residents down (together they account for 22K of the dwellings, about 10%). Confused yet?

Thanks rentah for the link. I continue to be disgusted by real estate agents and their self-regulating industry in new ways!! With this sort of practice & the "incentives" talked about at vhb some months ago (sellers giving buyers a $50,000 decorating allowance off the top of the sale price which isn't recorded) a crisis of consumer confidence in this industry really should be a no-brainer... clearly the market is being manipulated by agents and their self-regulating association. The last 2 paras really hit home:

"According to Mr. Wright, ethics are key to the industry because real-estate transactions, like any other commercial contract, are founded on trust. There has to be confidence in the marketplace for this to exist.

But if it's possible to change listing information, how do buyers know that the system is accurate? The next time the industry trumpets news of yet more record sales in the city, you may want to question the figures."

I think about the agent who flipped her clients home recently & got sued and I think of all the agents who are personally heavily-invested in speculating on real estate in vancouver (evidenced by so many anecdotes on these boards & my own experience looking at rental suites)... lots of examples of shady practices out there.

When decent people get hurt in the upcoming market debacle I hope they look squarely to the real estate industry for creating & sustaining this stupidity through manipulation & outright lies.

mk:
It'd be fair practice for Realtors to have to disclose their investments in the market to all clients and perhaps publically, too (principle property and investment properties). This is what occured in the stockmarkets, but note it only became an issue AFTER the tech crash.
Similarly, margin requirements (read mortgage lending practices) are only questioned on the way down.
So we can expect all sorts of public handwringing and commissions and new 'guidelines' for mortgages and realtors when this all unwinds. It'll be a big yawn because it'll essentially be window dressing after the horse has bolted the barn (mixed metaphors intended for the fun of it).

Maybe someone out there can answer my question,

At realtors' seminars, are they being told that the Vancouver (and Canadian RE market in general) are not going to suffer the same declines as we are seeing in the US because "...the US is financing BILLIONS fighting the war in Iraq"?

I have now had THREE realtors tell me this in the past few days.

Dunno if it's as quite as dramatic as it seems, given that as aetakeo says a lot of those new condos are pretty teeny. They account for a big chunk of new construction in the city. The trend to fewer people per household isn't restricted to Vancouver either - it's one of those societal shifts, at least for now.

"I have now had THREE realtors tell me this in the past few days."

Well, isn't Cam Muir now the chief economist of the BCREA? No doubt they get forecasts distributed.

Mohican, I'm glad you found that table-- I hadn't noticed it!

FWIW, last night my realtor told me that her boss was off at some real estate conference last weekend, and they expect "strong population growth" to continue for quite a while (never mind that it's as low now as it's ever been in the past!), and that because of that population growth, they expect RE prices to continue to rise 4-6% annually through 2016.

I suppose the realtors are implying that the US housing problems are due to their war, rather than any domestic factors or problems with lending standards...

Dave, pop per household for GVRD as a whole, and for Vancouver's statistics, did not change from 1991 through 2001.

In some areas, the numbers dropped, in others they increased, but on the whole they stayed the same.

It could well be that the same number of people are now living with less square footage for themselves-- a couple friends of mine are planning on having children soon, and they just moved into a 1-BR apartment.

Thanks for that article, now we know how Rob Chipman comes up with all those "sold over asking price" sales numbers.

Sounds like they are grasping at straws for reasons to keep the bubble alive. Guess you have to come up with something to keep the troops positive in the face of a total onslaught don't you ? Just give'em the George Patton speech,that'll work.

m- Time will tell if this is an indicator, I suppose. But right now we're comparing apples and oranges. The relationship between new construction household numbers and existing household numbers seems a bit unclear to me, and it seems likely that some of the difference is an artifact resulting from the construction of small condos.

I'm just saying some of the conclusions being drawn here may be wishful thinking. I hope I'm wrong.

"Thanks for that article, now we know how Rob Chipman comes up with all those 'sold over asking price' sales numbers."

I will reserve judgement for now. However, until Rob can explain the prevalence of fudging asking prices in BC, his numbers are suspect. Inventory and sell/list I think are still OK but the asking prices I am assuming to be garbage until he convinces me otherwise.

but the asking prices I am assuming to be garbage until he convinces me otherwise.

Asking prices are pretty much meaningless even if they're not being manipulated.

"Asking prices are pretty much meaningless even if they're not being manipulated."

That may be. The issue is transparency and that the numbers, however meaningless, are not fraudulent.

Anyone for a real-estate investment? Friend of mine has just rented a brand new townhouse on East Georgia St right off Commercial.

Last year I recall they were using the 6-months-or-less flips as their indicator but I believe that's too short of a time period, especially with all the pre-sales over the last few years.

If you really want to take advantage of your flip, wouldn't you hold on to it for 6 months, so you could avoid the capital gains tax? Or is the period one year?