Thanks to PaulB and Larry, we now have almost two years of daily housing numbers. What a great service they have provided to us by reporting the daily numbers!

I have graphed the 2010 and 2011 daily numbers that I have. The numbers come from the monthly forum archives at VCI here. Those forum archive numbers came from PaulB and Larry Yatkowski, who post the numbers almost every day.

I chose a 21-day moving average here to smooth out some of the bumps in the curves. This is a 21 *calendar* day average, so it takes the average over all numbers that appear in a 21 calendar-day window. For January 2011, I included December 2010 to get the 21-day window going.

I will add 2012 to this as we go along. I think this will be helpful because we can compare the sell-list we are seeing to the historical normals as we go through the year. Of course, we only have two years of 'historical' here, but this still helps, I think. 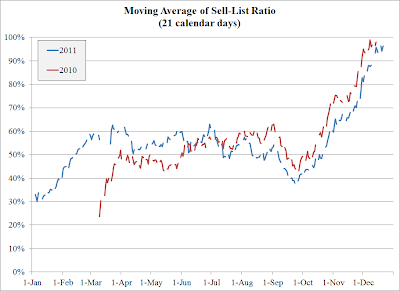 If we want to see the historical values, we can look at the REBGV monthly reports to get sell-list ratios. I have these reports back to 2001. Here is what things look like. The 11-year average is in solid black and the number label for each month is the value for the 11-year average in that month. 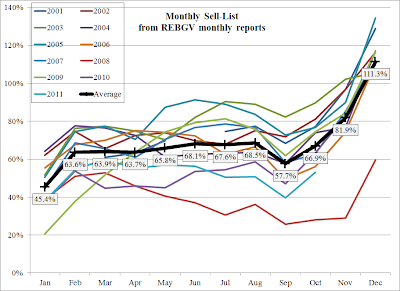 hi ,
I also want to find this ratio .But i don't know to find this .can you tell me how do you do ratios and find them .

I haven't analysed sell-list ratios much for any predictive merit but 2008 was, in the context you presented, anomalous. If 2012 looks anything like 2008 it will be meager times ahead for the REIC.