A key element to watch are mortgage rates to determine affordability, these days with inflation low it looks like mortgage rates are heading down again, perhaps with a slightly larger spread to risk-free than in the past. Here are the 1, 3, and 5 year conventional mortgage rates as reported by the Bank of Canada:

The 5 year rate, as reported by BMO today, is now below 3% for the first time. The issue facing the Bank of Canada and the Canadian economy is what happens if credit growth increases further. Canada's household debt-income ratio has been moderating of late but there are significant risks if credit begins to increase again with historically low mortgage rates. 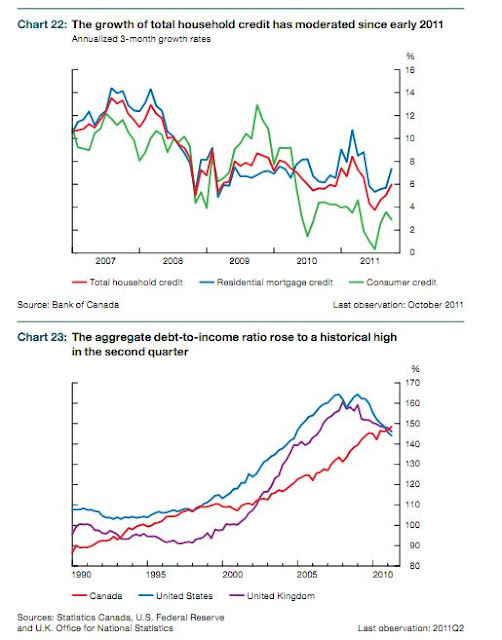 As mentioned by the Bank of Canada in its most recent financial system review:

Despite the rebound in the growth rate of mortgage credit in October, the Bank expects a gradual moderation in the underlying trend in household debt accumulation over the medium term as activity in the housing market slows and as lower commodity prices and heightened volatility in financial markets weigh on the wealth and confidence of Canadian households. Since the growth of personal disposable income is also projected to be moderate, the gap between credit and income growth is expected to narrow but remain positive, implying that further increases in the aggregate household debt-to-income ratio are likely.

Ultimately a decision needs to be made: is it in any way acceptable that debt-income ratios continue to increase, or is it necessary for the government to step in and ensure this ratio does not grow, and even starts to reverse? These are difficult decisions, it could mean that Canada's growth rate would need to be reduced to deleverage debt to more sustainable levels in the interim and could temporarily tip the economy into recession.

In order to facilitate deleveraging in a low interest rate environment there are several things the government can do, including reducing loan amortizations to 25 years from the current 30, and even as far as issuing quotas on available loans. No matter what methods that are announced to maintain or reduce household credit, if any, and there are signs that debt is increasing faster than incomes, I am speculating the government will employ mechanisms that ensure debt levels are contained.

In the past when the government has announced tightening of credit conditions through its mortgage insurance arm (CMHC), it has done so within the first 5-6 weeks of the calendar year. Further curbs through mortgage insurance guidelines are not a guarantee that households will curtail their lending; more deterministic methods of capping loans may be required. We shall see!
Posted by jesse at 1/13/2012 06:30:00 PM

I would not be surprised to see year over year mortgage growth well over 8% with these ultra low fixed rates for the first two months of 2012. I expect more demand to be brought forward as many fence sitters will believe the hype of "throwing money away by renting is foolish" and enter into the market. Boomers buying kids homes and investors ( ahem, speculators) could make one last big gasp into the market as well.

With higher mortgage debt growth and stagnating incomes, I would be absolutely shocked if there was no announcement of more mortgage rules.

I guess we will see how this one plays out in the next while.

Thanks for the update

It seems there is a lot more that could be done with the CMHC lever as that is the main portion of personal debt.

But they are barely brave enough to rest a finger on that lever, they are terrified of recession. Who would risk their career for the economic security of the country? That would just be foolish...