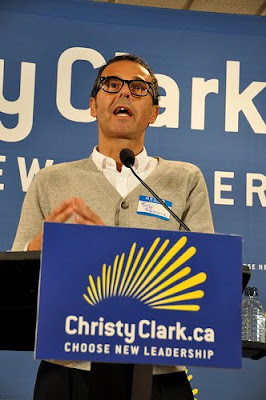 ...as long as you ignore the parts that are unaffordable, at least according to condo marketeer and dark-rimmed rose-coloured-glasses-wearing Bob Rennie (emphasis mine):

Mr. Rennie, who commissions research on real-estate trends for an annual talk to the industry, said that once the skewed prices paid by a small group of mostly mainland Chinese buyers in Richmond and the west side of Vancouver are removed, housing prices are comparatively reasonable.
As well, the numbers indicate that only about 1 per cent of those high-end buyers are non-resident investors.
“When you’re looking at the numbers, you have to build a fence around the west side, where there are external forces operating that have nothing to do with local forces,” Mr. Rennie said.
Yes, he said, the sale prices on those houses have increased dramatically in the past year.
But that top one-fifth of the market operates in its own world and has almost nothing to do with what is happening with real estate in the rest of the region that is connected to the local-buyer market, he said.

Well no. Indeed if we do take out the top-tiered sales from Vancouver's real estate market, the rest of the region is not-so-hot, though still hot. Contrary to the supposed fenced-offedness of certain "prime" areas of the city, what's hot in Vancouver West et al must be leaking into other areas because, well, rich residents (and 1% non-residents...) pricing out the rest of the locals tends to make locals look elsewhere for accommodations because -- go figure -- locals want to live locally. And the "top one fifth" is 20% of, or 1 in 5, purchases. Yeah...
Now why oh why would Mr. Rennie be speaking about foreign ownership and affordability now? Did someone ask him for his opinion? The fellow doth protest too much, methinks. Look for more explicit calls for foreign ownership restrictions or other similar curbs in the coming months.
Posted by jesse at 5/24/2011 10:46:00 PM