CMHC released the nationwide monthly housing statistics and here are the numbers for the Vancouver Census Metro Area. 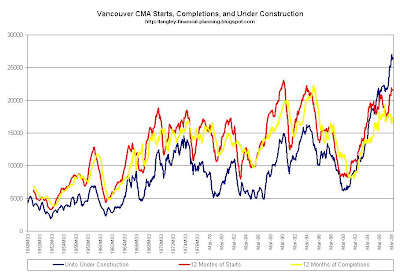 I have a feeling that we've seen the cycle highs for dwelling starts and units under construction and it is probably all downhill from here at this point. We can keep an eye on these numbers each month to see if that holds true. There is a lot of current inventory which will hold back developers from starting as many projects as they have been and this will free up labour to work on the existing projects. I'm looking for the completions to speed up dramatically by the end of this year and for the units under construction to drop to its normal levels below the annual number of starts and completions. This process will probably take at least 18 months. I expect the prospects for construction employment to be extremely negative by the end of 2009 in the Vancouver area.
Posted by mohican at 7/22/2008 06:48:00 AM

Hey Mohican. Just want to say how much I enjoy your blog. Keep up the great work.

When the "under construction" completes over the next 12 - 24 months, there is going to be an absolute blood bath (particularly in the multi-family market).

My estimate is that by the end of July there will be between 9 - 11 months of inventory in Greater Vancouver - with 25,000 more units hitting the market over the next 24months added to the existing inventory, we are talking about 45,000 units (albeit, some listings on the MLS will be cancelled). In any event, 45,000 units for Greated Vancouver is a huge volume of housing.

Based on the average household size of 2.1, 45,000 housing units will provide accomodation for about 95,000 people (which is about 3 years of net total migratory growth to BC based on the last 10 years), but migratory growth is sure to slow as the transient construction workers leave...

It's going to be a slow, painful, unwinding.

van coffee, I don't think the unwinding will be so slow when the media reports the price drops for the next couple of months.

We're much closer to panic than you think.

Macho -
We'll see.
Never underestimate the "financially illeterate's" ability to deny reality.
I think everyone will be suprised at how long the correction takes.

Bear in mind, '81 & '82 (arguably much more severe circumstances), the bulk of the correction took 18 months (very fast for R/E) but the declines persisted for many, many years to come.

Will wait for the official numbers at the end of the month to confirm.

I am looking at the completed and not yet sold units right now for an indicator of price drops and I am seeing 15% + drops right now as developers are trying to keep the product moving.

I think things are going to happen very quickly now.

If we're going to mimic the US experience, shouldn't we be seeing incentives coming from the developers by now? I haven't seen any free granite countertop offers yet.
Do you think we will skip that whole scenario and just enter into a free fall without bothering to nod to our southern neighbours?

john - I think we are going to skip the whole incentives thing and just move right into the price drops. I am already seeing 15% price drops on completed new housing. $100000 is a pretty good incentive!

According to Rob Chipman, prices are coming off quickly:

Our downward slide won't be hampered by the uncertainties that are typical for the first markets to change direction.

Fundamentals like unaffordability, recession, demographics, inventory, and global precedents are so clearly spelled out, that any inovative incentives would be entirely pointless....it's gonna be straight down, fast and furious!

"If we're going to mimic the US experience, shouldn't we be seeing incentives coming from the developers by now? I haven't seen any free granite countertop offers yet."

We've already had that, in Victoria at least. Reflections offered a deal where the developer pays half the mortgage for the first three years, and I've seen other ads including things like free HDTVs or free appliance upgrades.

Hey John - how about a free car with your condo purchase?
http://battistella.ca/dev/index.php/prereg/promo/

Thanks for the link Wompeter, but that's in Calgary. I am not a RE bull by any means, just curious as to whether or not we will correlate directly to the scenarios that played out in FLA, CA and the other bubbly states. I haven't seen any developer incentives in the Tri-Cities yet, and there is no shortage of condos out this way.
That said, I'd be happy to see this market skip the formalities and proceed directly into meltdown this fall.

I haven't seen any developer incentives in the Tri-Cities yet, and there is no shortage of condos out this way.

Just wait until the pre-sales buyers start defaulting. The developers will have to clear that inventory, pronto.