Prices are Down 0.8% in the Fraser Valley

Here are some statistics from the Fraser Valley Real Estate Board. My comments added in bold.

The average price of a single family home in the Fraser Valley reached $535,572 in September, the highest average price ever, according to statistics from Fraser Valley Real Estate Board’s Multiple Listing Service®. September’s MLS® numbers also revealed steady sales for sellers and increased inventory for Fraser Valley buyers. The benchmark house price index declined -0.8% from August and the trend is down, down, down with well over 6 months of inventory going into the fall. Lots of new supply is coming onto the market with even more on the way. Prices are out of reach for most people now and demand is decreasing while supply is increasing. Econ 101 tells me that we should expect a new price equilibrium to be established.

“September numbers show that Fraser Valley buyers and sellers took a bit of a breather after an unusually busy summer market, but we can see that the return to a lower sales level and an increase in inventory hasn’t affected the strength in average prices,” observes Kelvin Neufeld, president-elect of the Fraser Valley Board.

“In September, the communities of Surrey, Langley and Mission reached their highest average prices on record for a single family home and in August that happened in North Delta and Abbotsford.”

There were 1,332 sales processed through the Multiple Listing Service® (MLS®) in September, on par with last year when 1,323 sales were processed in September 2006. This marks a decrease of 25 per cent compared to the previous month’s sales of 1,763 in August. 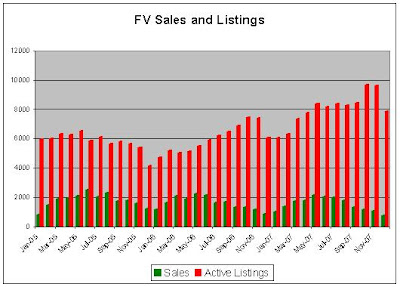 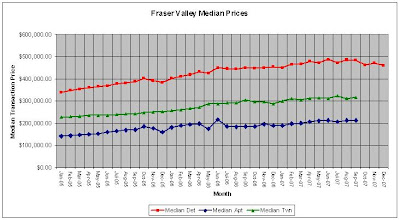 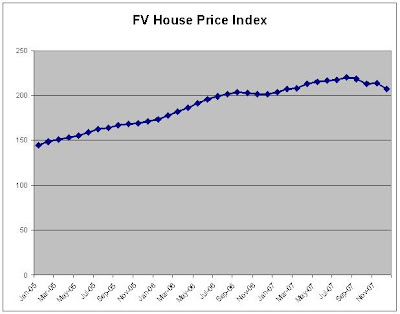 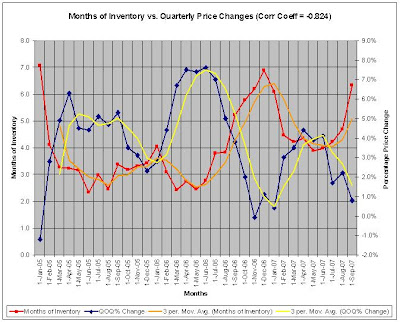 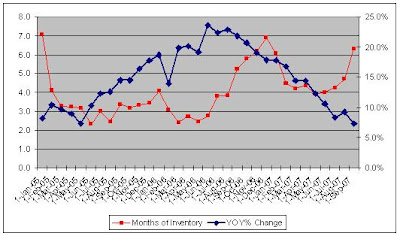 You exaggerate.
"trend is down down down" for a 0.8% decrease in a month. Just because previous months broke records doesn't justify hyperboles, in particular when later you write "reached their highest average prices on record", but this time with no emphasis.

Sorry luc, the internet is not the greatest for expressing complex human interactions and I am all to cognizant of my overstatement.

I do believe the trend for prices is down though because the Months of Inventory will be above 6 for the next 4-6 months, if not longer. This will bring negative price pressure to the market and I fully expect prices to be quite a bit lower by the beginning of spring.

Hmmm. There is lots of supply and no signs of demand keeping up due to less buyers, tightening credit, etc. Prices are starting to adjust now, and seem likely to keep "adjusting" for the foreseeable future.

By spring you mean February. (isn't that Spring for RE?)

Can you check the X axis on some of the graphs (e.g. FV Sales and Listings), unless you have become clairvoyant?

This is huge. We haven't seen a price decrease in a very long time. I believe 0.8 percent in one month is about 10 percent decrease over one year if it continues.

Of course this is just one month so I will brace myself for next month :-).

Though a 0.8% drop in benchmark is nothing really significant, it adds to the overall YOY price appreciation trend, which is eerily similar to what has happened in the US. Vancouver is different. But the trend is the same.

Deja vu. We have seen this before. Don't get too excited. By february, the trend may be up up up again... :(

depresso:"By february, the trend may be up up up again."

You may well be right but consider the graph showing YOY price change. It is trending in a long arc starting at about 5% YOY, going up to peak around 23% a year ago and is now around 5% again, heading towards 0% YOY.

In the US this exact shape showed up in their price graphs but there the trend has continued into negative territory in most cities except for a couple, notably Seattle which is still +5% YOY.

Seattle is roughly on par with FV in terms the timing of the graph and in the shape; other cities in the US have the same shape but are shifted earlier in time.

It is too bad Restevens has left us, Until somebody can provide the numbers, please check this out for the numbers without the insulting spin.

"Can you check the X axis on some of the graphs (e.g. FV Sales and Listings), unless you have become clairvoyant?" Mohican does this from time to time on purpose (his forecast!) :-) Regarding trends this is not a trend it is an anomaly; a trend in real estate or anything else requires data over a normal time period specifically for the data being trended (global warming need centuries of trending, the Canadian dollar needs at least a year preferably two) in real estates case probably 4 quarters hardly one or two or even 3 months,that kind of change could still easily be an an anomaly.
Also all influences must be taken into consideration on an anomaly or diversion from the norm, such as weather, the rising canadian dollar, the flu season etc. I'm a bonafide bear but the trend is $100% bull at this point in time! If the weather remains as crappy as it is and is forecast to be this winter even a 13000 inventory on Chipmans blog would not make me call a bear trend. I would only do that after 3 months of above average beautifull spring, with no reduction in inventory ! :-)

Deja vu. We have seen this before

Not with Alberta declining, the whole US crashing, and a global credit crisis, we haven't.

Deja vu. We have seen this before

Not with Alberta declining, the whole US crashing, and a global credit crisis, we haven't.

We have seen this in Alberta last year - inventory went up and prices went down last fall. Then the prices stagnated until the end of the year only to make another big jump from january to june. It is very possible that the Alberta RE bubble has finally popped, though, judging from the record inventories...

In Vancouver we have seen this last year too. Prices were declining in fall 2006 and rebounded in winter and spring 2007.

In FV, the inventories are high and sales are low right now. But we will not know the real trend until february 2008. If the spring selling season doesn't materialize, then the bubble has burst.

But we will not know the real trend until february 2008. If the spring selling season doesn't materialize, then the bubble has burst.

Agreed, though patriotz is correct to point out that the US housing crash and credit crunch are new this year and will adversely affect our market, either directly or indirectly.

Here's that Seattle prices down link via tinyurl:

It actually states:
"September's median price was down 8.9 percent from August."

Semantics aside as to what a "trend" is, but I disagree. Eyeballing the graphs is enough for a pretty decent guess that FV prices are following a similar pattern (delayed by 1-2 years) to many other US cities in the past 5 years.

Correlation does not necessarily portend bad news in FV or GV. Though, interestingly, a lot of news articles were recently touting Seattle as one of the strongest RE markets around; it is now becoming obvious Seattle is in some doodie like all the rest. It just came late to the party.

I agree with you on inventory. I think the levels are high but not high enough yet to lead to a price crash. I'd look for the Chipman inventory to go over 17K and sales to decline around 30% YOY before we see massive price declines.

The other thing we didn't have last year was 10+% higher prices and more people who CANNOT BUY because the prices are high. High prices are the cure for high prices in a lot of respects. As people are priced out it necessitates price drops to get demand back.

The Seattle 8.9% median price drops is important and not. Uusually the median overstates, but in this particular case it understated. Probably one of the first manifestations of the liquidity crises on the sales mix. Expect hugely declining medians across the speculative U.S. markets.

We really should really be looking at the Case Shiller, not the median. The median is only important in that it is widely followed. Funny how bullish individuals play up the median because it is usually in their favor. In this article they play it down because all of a sudden it isn't. I wonder if some bears will now play up the median. All folly, just look at the Case-Shiller.