A Picture of Modern Hyperinflation - Zimbabwe 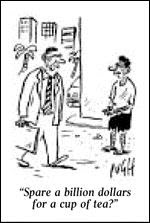 Zimbabwe (1999 - present)
NY Times Article
The Rhodesian dollar (R$), adopted in 1970, following decimalization and the replacement of the pound as the currency, was set at a rate of 2 Rhodesian dollars = 1 pound (R$ 0.71 = USD $1.00). At the time of independence in 1980, one Zimbabwean dollar (of 100 cents) was worth US$1.50.
Since then, rampant inflation and the collapse of the economy have severely devalued the currency, with many organizations using the US dollar instead.
On 16 February 2006, the governor of the Reserve Bank of Zimbabwe, Dr Gideon Gono, announced that the government had printed ZWD 21 trillion in order to buy foreign currency to pay off IMF arrears.
In early May 2006, Zimbabwe's government began rolling the printing presses (once again) to produce about 60 trillion Zimbabwean dollars. The additional currency was required to finance the recent 300% increase in salaries for soldiers and policemen and 200% for other civil servants.
In August 2006, the Zimbabwean government issued new currency and asked citizens to turn in old notes; the new currency (issued by the central bank of Zimbabwe) had three zeroes slashed from it.
In February 2007, the central bank of Zimbabwe declared inflation "illegal" and outlawed any raise in prices on certain commodities between March 1 and June 30, 2007. Officials have arrested executives of some Zimbabwean companies for increasing prices on their products.
Posted by mohican at 10/23/2007 10:36:00 AM