Here are the March 2007 Fraser Valley Real Estate Board statistics and these are the highlights: 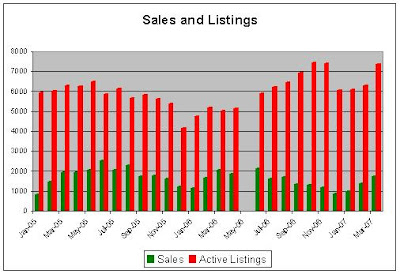 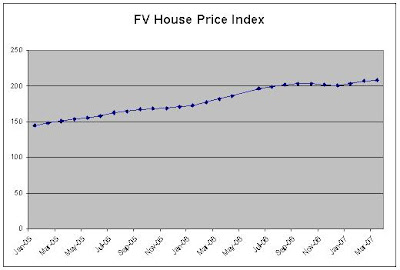 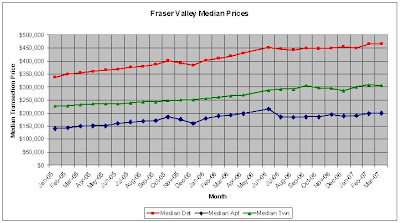 Last year the FV months of inventory was 2.4 but now it is 4.2 - a significant increase - but not enough for price decreases yet. The spring selling season is just starting so we will see if demand holds up through April and May. 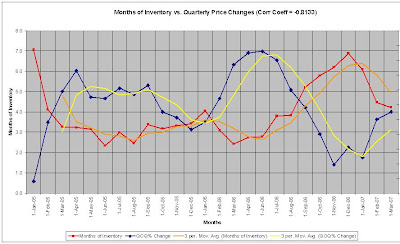 Real estate around BC is know at the point of utter mania. There is no sound economical argument that can argue for the prices to continue, let alone appreciate, from the levels seen last year. Yet, here we see them still marching higher.

The only question is when, and how much will prices crash.

Yes, of course, now I get it, the prices are going up, so obviously "The only question is when, and how much will prices crash." Just like I feel really good today, so obviously I will probably drop dead tomorrow of a massive coronary. You need to quit reading these bubble blogs. People have been typing your exact same comment on bubble blogs for years! Wait, maybe I'm the one who should quit reading bubble blogs, I did for awhile, but dammit you guys keep sucking me in. Oh well, off to plan my next successful real estate venture, whatever the prices do, don't matter to me.

Median prices are flat from February. That is not what happened in 05 and 06.

Here's a travel song for you:

But it's different here, right?

Oh well, off to plan my next successful real estate venture, whatever the prices do, don't matter to me

Do we have an oxymoron here?

"the prices are going up, so obviously "The only question is when, and how much will prices crash."

How about a re-phrase:

"the price/rent multiple is going up, so obviously "The only question is when, and how much will the mulitple go down."

No, we have a "you don't know anything about re investing and i do" situation.

Apparently you don't know it's cyclical, so good luck.

Permits are down led by Vancouver and Toronto. Is this not a normally viewed as a leading indicator? Check it out at the G&M.

travel songs said: No, we have a "you don't know anything about re investing and i do" situation.

I've filed this one in the (now overstuffed) 'Arrogant Bullswagger - Remember to get back to these guys after the crash' file.

"Let's not get carried away in spinning this as Canada's own real-estate implosion.” (HSBC)


We wouldn't want to dare spin this would we now ? LOL....what a load of crap, for once there is a clear signal and they don't want anyone dare telling the truth....pathetic.

This may be the first of many quotes for the Hall of Shame as this bubble delfates.

What's interesting about the G&M article is that they say weather was a factor. Maybe in TO, but certainly not in Vancouver. We had a downturn in permits because there is a growing realization amonggst builders that the present situation is untenable in the long run....

Whatever way the FVREB tries to spin it - those are some craptacular numbers.

"Whatever way the FVREB tries to spin it - those are some craptacular numbers."

I fully agree, these are some of the most bearish numbers we could see at this point in the cycle. The supply / demand picture is shaping up to be abysmal for the bulls this spring.

"The supply / demand picture is shaping up to be abysmal for the bulls this spring."

You are probably right. I think if inventory continues to increase through the spring then prices will be very soft. Watch Rob's site for clues. Where would we be without Rob.

Permits are down led by Vancouver and Toronto. Is this not a normally viewed as a leading indicator?

It means the builders are expecting prices to go down (you know, that upward sloping supply curve).

If they actually expected prices to go up they would be building even more.

Like the song said, "Lemme tell ya, these guys ain't dumb".

I don't think builders are that smart (about a coming downturn). How would they know about a downturn before anyone else? I think it is more likely that less people are hiring builders to build stuff for reasons that will probably lead to a downturn. Like maybe:
- Less cash for renovations because it's all in the mortgage.
- Less people that can afford to buy a house knock it down and build a new house because even the land costs a whack load too much.
- It's way to expensive to hire anyone in the construction industry right now.

Othewise we're gonna have to talk to some builders and see what they are using to make these accurate predictions that so far we've sucked at :-).

Does anyone remember the inventory numbers during the "pause" from Spring to late Fall, 2004?

I remember prices a tumblin' down around then, only to begin shooting up again around March, 2005.

Prices are so inflated from costs, I think builders are safe, Even if prices drop by 50%.

It's the people who bought in the last 3 years who will be paying for their mistake for most of their productive lives.

Even if there were not to be a spectacular crash, there would have to be a major outbreak of inflation accompanied by hefty wage increases, and low interest rates all concurrently to help these heavily indebted fools out of this mess.

KD for dinner for 25yrs, and sucking up to the boss, at both jobs.

That is a lot of stars to line up.

"KD for dinner for 25yrs, and sucking up to the boss, at both jobs."


Maybe this coming crash will resolve the employment shortage problem with all these lower paying service jobs that are starving for workers. It would be nice to see so when I go to get gas I don't have actually have to go behind the counter and punch in my own 649 tickets cause the guy running it is totally imcompetent after working there for 2 month and still can't figure out "4 quick picks with the extra please."

I hope you’re not planning on splitting your lottery winnings… Cuzzz… apparently, you’ll soon need 32million bucks to buy a condo here in beautiful Vancouver! Didn’t’ you hear! We’re getting the Olympics! Yee Haw! To infinity and beyond!!

"I don't think builders are that smart "

If the are anything like their counter parts down south, I'd agree. Toll, Pulte et al built and acquired pricy land options right until the tide turned in May 2006. They got caught loaded to the gills.

I wonder how many of these builders who are cutting back on risk, learned their lesson in the early 80's.

The number of small spec builders (including several aquaintances)who got cleaned out by the 81 crash was huge, and the damage was devastating.

Toll, Lereah, Appleton, and our own "usual suspects" know the score; it's too obvious not to know.

But they make a good buck selling the sizzle, even though, the steak has been burnt to a crisp.

I don't think builders are that smart (about a coming downturn). How would they know about a downturn before anyone else?

Anyone except the current crop of greatest fools still buying can see that a downturn is coming.

The market turned in 1981 while the economy was still strong. So did the US market last year. Right now the housing crash south of 49 is in full swing, with a recession looking more likely by the day.

You don't need a weatherman to know which way the wind blows.

Anyone except the current crop of greatest fools still buying can see that a downturn is coming.
...
You don't need a weatherman to know which way the wind blows.


I just think that most people don't even bother to put their hand out the window.

Just yesterday I was talking to a coworker who is planning to buy a 3 bed townhome in White Rock. I told him I thought it likely prices were about to go off a cliff. He argued that he needed to buy before he was priced out and that it was the only way he could get into this market.

I think that for the most part it takes a lot of effort to override your instinct. When there are lots of mice you get lots of wolves. The wolves don't stop to think that there aren't always going to be this many mice so maybe we should just hang back on the eating and procreating thing a bit so it doesn't suck so much when the mice population dies out.

And even if they do sorta know that it's gonna go down. People sorta know that smoking is going to kill them but they still smoke. Overweight people know that being overweight is bad for your health but they don't diet. We humans are just bad actors all around.