As you may or may not know the Chicago Mercantile Exchange offers housing futures for investors to take a position in. The contracts trade off of the S&P/Case-Shiller Home Price Index that tracks single-family home prices in a number of cities. The most recent actual home-price data released by S&P/Case-Shiller in from January 2007. Below we compare the difference between the CME housing contracts that expire in February 2008 to the actual January 2007 prices to see what the futures are forecasting for home prices. Based on the January prices, the Chicago market is expected to fall the least by 3.3%. Boston is expected to fall the most at -6.2%. The Composite Index of all markets is expected to fall 5.6%, indicating investors believe a bottom will still not be in place by February of next year. 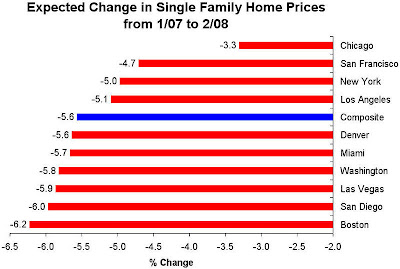 We have been tracking the housing futures for some time now, and below we look at how accurate they were based on our initial data points. We first started tracking the housing futures in July 2006. Below we highlight where the November 2006 contracts were trading in July along with the actual November 2006 numbers that were released earlier this year (there is usually a 3 month lag in the release of the actual reports). 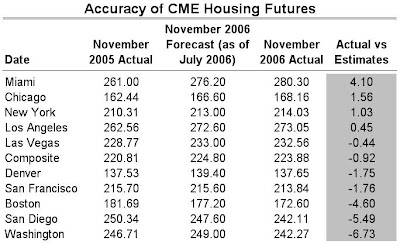 In general, the contracts seemed to do a pretty good job of forecasting future housing prices five months out. Miami, Boston, San Diego and Washington DC did, however, have a pretty wide discrepancy. Miami was forecast to fall much more than it actually did, while Boston, San Diego and DC were all expected to fall much less than they actually did.

These contracts suffer from low liquidity issues, so that a few bets can sway them quite a lot. That explains why some cities are way off, but the composite is not doing too bad.

Vancouver is 12 month behind the US, we will start seeing some action next Fall.

Interesting how Washington, Boston, and San Diego are markets that were last year deemed the most volatile. I don't see Phoenix or Las Vegas. -\/- makes a good point about volume. Markets like these are informative as the participants have money in the game so the predictions aren't just off-the-cuff comments, like from MSM and RE association boffins.