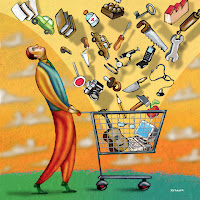 From iTulip.com. Check out the full article here.

First, a definition from the iTulip Glossary. "monthly payment consumer : n. a new kind of consumer last seen in the late 1920s when installment credit was invented to allow the middle class to afford new products which resulted from the wave of government financed WWI military technology working its way into consumer products, such as radio and refrigeration.

Sustained low interest rates starting in the mid 1990s, and accelerating in the early 2000s created the Monthly Payment Consumer. This consumer's behavior accounts for the cost of purchases not in terms of the total price but as a monthly payment in portion of monthly income. After several years of “No Money Down!” and “Zero Interest for Six Months!” financing, not to mention interest-only and negative amortization mortgages, consumers changed their behavior, stopped saving, and became used to the idea that credit is almost free and in nearly infinite supply.

The monthly cost of a home that went for $1 million in 2005 purchased with a $3.3% ARM carried the same monthly cost as a $500,000 home in 1995 purchased with a 6.6% fixed rate mortgage. The two homes are equally affordable, but the two prices apply to the same house with the 100% increase in price separated by only five to ten years' time and representing no equivalent 100% increase in value (utility). The price inflation was the result of low interest rates provided by central banks. Capital gains income earned by speculators who made money flipping houses during the period of rapid price inflation contributed significantly to consumption during the period.

The Monthly Payment Consumer, through his and her grim determination to eek the last ounce of material enjoyment from the last dollar he or she may so easily earn or borrow as he or she can today, famously accounts for 70% of US GDP. Jane Burns (the article's author) is no help, though, as she explains at the outset. The Burnsian consumer gets more joy and gratification from not buying each and every dispensable product she doesn't purchase than the folkloric consumer of economists' models gets from, in the words of George Carlin, "spending money he doesn't have on crap he doesn't need." The question is how many consumers will go Burnsian on us next year.

How prevalent is the monthly payment mentality here in British Columbia? How many people do you know who are:
1) the Monthly Payment Consumer?
2) The Burnsian Consumer - one who gets more pleasure from not purchasing?
Posted by mohican at 1/15/2007 09:34:00 AM

Most people I come across fall into the "Monthly Payment Consumer" classification. I see this type of lifestyle as voluntary slavery - if there can be such a thing. Paycheck to paycheck, month to month, no hope without some major sacrifice.

I also have friends who are 'Burnsian' and I myself am at many times like that, althought I try to have some balance and not go too extreme.

I used to be a "Monthly Payment Consumer.

I took in a lot of debt that I shouldn't have, to purchase stuff I didn't need. After awhile I realized that the "stress" of having so much debt was taking the fun out of my newly purchased possessions.

I decided that I was sick and tired of the stress and sold what I could, at a loss, and paid off my debt.

A lesson learned was, debt is stressful and consumer goods depreciate drasticaly.

I am financially happier now that I am not paying banks interest on a bunch of junk I really don't need.

I'm in the process of leaving that... I wasn't in huge amounts of debt... just a car which I could afford but for environmental, guilt etc would love to sell it... living downtown did allow for that.

But I am in the process of 'liquidating' everything... I really enjoy not having any crap cluttering it up as well as the free to go at anytime mentality.

This coupled with cheap rent and a well thought out investment plan coupled with increasing my skill set... I feel many times over better.

Do I feel rather knarled because I'm older and still do not own, and rent in a crappy place - yeah, that takes some time to explain but then people nod and think - yeah, thats a great plan... beats the debt load I'm looking... but do you like my car????'

I'm slowly falling into the "how much a month?" crowd, but I'm fighting it. I think that, unfortunately, this is inherant and ecouraged in our financial system. Consume now, pay later.

I was in Asia for years, and it was the direct opposite. Put off consumption for another day and save your money.

I really think it is a personal battle to stay free of the monthly payment mentality. I am encouraged to see people, especially from other cultures, actually save for things and consume less than the typical north american.

I really can't say I agree with the premise of putting someones name on a phenomena that pre-dates them by so much, i.e. calling me a Burnsian. I'm very thrifty, but this comes from my parents, who, in turn, learned it from theirs, ect.. I think it takes a pretty big ego for someone to claim credit for what was the norm for much of history.

I also don't think that I get much joy from the non-purchase of things, in fact, I find it quite a challenge not to go out and buy everything I want. No, it isn't a happy time when I see someone bring in their latest electronic 'just got to have' item. My joy comes from knowing that that I have enough money for things such as traveling, while my 'got to have the latest gadget' is sitting at home for the holidays stewing about how he can't afford to go anywhere.

wilson3215
Maybe it is too academic, but I really like the Robinson Crusoe scenario that economists use when teaching the concepts around consumption versus savings.

The individual has a preference between consuming now or later. Consuming now carries a penalty, foregone interest (or if in debt, interest). A rational individual will estimate his "utility" between consuming now and later. Obviously, Robinson consuming all his food now will cause diminishing marginal utility now (as you fill up, you value extra food less and less), and will make him miserable in the future. On the other, being saving so much that he is miserable now and then dying with with stocked stores makes no sense either.

These examples sound academic, but make a lot of sense. The whole idea is to "smooth" your incomes to maximize the benefit of your earnings. Since most peoples incomes rise during their careers it only makes sense to borrow some from the future.

The big assumption is of course rationality. Looks like many forgot the lesson of the great depression and are now decadently borrowing and spending again. IMHO a gradual cultural phenomen. We look to the Joneses and try to keep up. It will end badly, but not sure on whose dime.

I found that mildly offensive too, I know that my elders have long been part of the mindset that saves for purchases and there is plenty of evidence in historical documents to suggest that this is not a new behaviour. Oh well, it was an interesting read!

I've been out of debt for a year, and recently I sold my late-model car and motorbike. Now my wife and I are making do with her car, a '93 Camry that we'll drive for another 10 yrs. The Camry doesn't turn heads, but I don't care about that and it's actually less stressful to drive an older car in Vancouver - I don't have to worry so much about theft or parking-lot dings.

I used to spend like there was no tomorrow and was digging myself deeper into debt every year, but my wife changed my perspective on debt and savings.

She's Chinese-Canadian and doesn't understand why most Canadians spend every penny they make and more. She understands that people want to reward themselves for working hard, but she thinks that an increasing bank balance is reward enough.

Don't get me wrong - we'll spend money for things we really want. And we eat dinner out a couple of nights a week, etc.

But we don't buy all the impulse-purchase crap that most people buy and which eventually sits in a box in their garage, forcing them to park their financed SUV outside in the snow.

I suggest you spend it now. If you dont, the goverment will spend it for you.
There are a unbeliveable numbers of welfare reciptents that have never worked a day in their lives, and they will need retirement money as well as medical, and Goverment workers who will retire in their 50's with full benifits, ect. The list is endless of people that will want your money.
They will take from those who have money in the bank.
Think about it. At least you will get to enjoy some of it instead of some crack head in a section 8 house next door to you.

Joseph, you should spend less time watching Fox "News", and stop using US lingo if you want anyone up here to take you seriously. The people you are whining about have no power to take your money. You should worry about the people who do.

As for myself, I have never borrowed for consumption, only for investment. Student loans, a couple of cars (not the most recent), house (paid off).

It should be clear to anyone with about Grade 10 or so math that a debt lifestyle leaves you with a lower standard of living (after an initial binge), not to mention greatly reduced freedom.

So effective focus on financial activities. The monthly payment consumers details wit some analytical touches you unveiled was totally worth reading and useful. The definition, sustained low interest rate, monthly cost of a home, behavioral approaches- every points you analyzed was very thoughtful and worth to follow. In fact, I was hunting for some tips to make a plan for living stingy. But this was indeed very useful for me. "Thank you" perhaps will be less saying for such quality stuff. Anyway, I enjoyed your brilliant job.