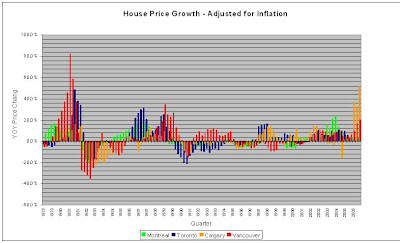 By far the most noticeable event in local real estate prices was 1981. There was a period of extreme price appreciation from 1979 to 1981, followed by a drastic correction that ran its course until 1986. 10 quarters of price increases and 15 quarters of price declines.

1992 through 1995 witnessed another price run up, although more subdued than the previous two run ups, and that culminated in a long period of prices declining through 2001. 15 quarters of price increases and 26 quarters of price declines.

The current cycle started in 2002 and YOY price increases will be evident through at least the first half of 2007 for a total of a 22 quarters of positive price changes. How long will the declines last this time after the longest run up in prices in recent history?

What does the data from the other cities tell us?

By the time this constant rise in real prices is over it will be the longest continual rise in recent history. How can it end any other way but a long sustained drop in real prices either through high inflation, nominal price drops, or both.

Typically the period of time for price reductions has been longer than the period of price increases. Because we have had such a long run up I think we can expect an even longer period of declines - est 7 to 8 years of real price declines.

Am I reading this graph correct?? This housing trend doesn't seem to be nearly as significant as the one in the 80's.

Can you clarify this? Thanks.

This housing trend doesn't seem to be nearly as significant as the one in the 80's.


I don't think it needs clarification. The early 80's rise was meteoric. It happened very fast, which of course means that nominal and real gains are almost identical.

Typically the period of time for price reductions has been longer than the period of price increases. Because we have had such a long run up I think we can expect an even longer period of declines - est 7 to 8 years of real price declines.

History would have it as such, but I think the current bubble is fairly large by historical standards, but more importantly global in scale. That means that a a decline in prices will spill over into the world economy and vice versa.

I was certain that it would collapse under its own weight (a long time ago), but I think I was blinded by the quick sentiment changes of equities market. The market actors in RE seem to be much more persistent, or possibly even stubborn. I wouldn't rule fast price drops such as in 82-83, but it could equally well drag on. I have tempered my expectations drastically, but I still think that it could go down a lot faster then most expect. We really should keep an eye on Phoenix, San Diego, Florida and Las Vegas.

I think you are right that the possibility for fast and hard price declines is there. Typically the price drops have been proportional to the price increases, so we could see some immediate relief over 8 - 10 quarters with a 20-25% reduction in prices and then another 12 - 18 quarters of stagnation before the next cycle starts. That would seem fairly typical based on history although a prediction like that has to be tempered by the fact that history doesn't repeat it only rhymes. There will certainly be similarities but it won't be identical because well, its different this time (just not the way most people mean that!).

So you could say that Calgary may be in for a rude awakening.

From what I can see there hasn't been a major price decline in this market just slow appreciation. Thanks,

"From what I can see there hasn't been a major price decline in this market just slow appreciation."

I had a look at the data and I charted it. It seems that the OK has had smaller price dips in past market cycles although it has exhibited similar price changes to the GV or FV RE markets. The long stagnation of the late 90s is apparent and the big runs up in prices in 89, 95, and now. The down drops just weren't as big or non-existent.

Evidently when I look at the chart, the current run up in prices is far larger than any previous rise. This is true in most markets around the world. I am sure the OK is no different than any other RE market. Prices rise and prices fall with the supply and demand story.

Do you know what the current months of inventory is for the OK? Total active listings last month / total completed sales. That should tell you where the market is headed currently. Over 6 mos = negative price changes ahead.

Thanks for looking into that for me.

Listings are up 32% in December YOY and sales are down 10% YOY. I am not sure how to calculate how many months of inventory.
Okanagan December STATS

Is it safe to assume that the Okanagan trends after the Lower Mainland Market?

My biggest concern is the Alberta market and the effect of their appreciation on the prices of Okanagan RE.

Is this the correct way?

Looks right based on the December stats. 11 months of inventory is a HUGE amount of inventory.

I wonder if the more rural areas of the OK impact these numbers. For the whole region it looks as if there are over 12 months of inventory. This is amazingly large compared to any other market numbers I've seen.

Looks right based on the December stats. 11 months of inventory is a HUGE amount of inventory.

Hang in there uncertain - with oil going the way it has been over the last week, I would think that the "rich Albertans" will be looking to drop a few properties. Just my opinion of course - for what it's worth.

When I was looking up there I viewed three empty houses in one neighbourhood, and they were still over-priced. It really made me feel uneasy about buying.

I think there is a lot of speculating going on there.

When I was looking up there I viewed three empty houses in one neighbourhood, and they were still over-priced. It really made me feel uneasy about buying.

I think there is a lot of speculating going on there.

A year ago I counted 19 houses built on speculation in ONE Vernon neighbourhood. They were either completed and empty, or in various stages of completion, with a for-sale sign prominently displayed. The obvious speculation in the market clinched my decision to sell.

If you're looking at the OMREB stats to see what's happening in the market, you should be aware that they massage the data as much as possible, to paint a rosier picture of the market. For example, if you look at the monthly statistics for last year, you'll notice that the figures for average and median sales prices were "year to date" for the best part of the year, and then (once a good monthly increase occurred) suddenly became monthly figures.

This had the effect of minimising the appearance of any drop in the market, while making any increase in the market appear larger.

Try graphing the monthly data (if you're careful, you can find the real numbers buried inside the OMREB reports) and you'll see that the market is more volatile than first appears.

If you do graph the monthly data (I've gone back five years for North Okanagan residential sales) you'll also see that the ratio of inventory/sales is cyclical, and always increases over the winter. While the current inventory of listings is huge, I expect it to double within the next year. Of course, that's my wishful thinking, but it's based on 40 years of observing the local market.

Thanks for the tip alpha_bear.

I am moving to the Okanagan and will be watching the market ocer the next year.

Are the houses selling?? I have been watching MLS for about 6 months and noticed a lot of listings still there. No price drops, except for a few minor ones.

Are the houses selling?? I have been watching MLS for about 6 months and noticed a lot of listings still there. No price drops, except for a few minor ones.

Houses are still selling, but sales always slow dramatically over the winter. Last month only 38 residential properties sold in the North Okanagan.

Most houses sold here do not get the asking price, and many local asking prices are far from realistic, so there's no sense looking at MLS listings for an indication of price drops. It's also easy to cancel and re-list a stale listing with a lower price so the reduction is not evident. I'm seeing large price reductions in the more pricy new construction. I've seen one listing drop from $1.4 million to $1.15 million.

What I find interesting is that yearly residential sales (in Vernon) have been flat over the past 5 years. There has been no shortage of new houses built in the past 5 years. If RE is such a good invesment, why haven't more people bought into the market?

LadyLuck over at RE Talks is accusing you of spreading RE Hysteria to drum up more business for your Mutual Funds. You need to go over there and reply.

uncertain:
I won't reply to Lady Luck because the accusation is ridiculous, unfounded, and she/he uses no facts to back up anything she/he says.

Good call, no need to get into it with her.