Comparing US Prices at peak to Canada Today

It's always refreshing to see new data to analyse but it's equally as refreshing to see existing data analysed in a different way. Over at vancouvercondo.info poster vibe performed some analysis comparing the price-income ratios in Canada today to the US in 2006, around the peak of their prices [jesse: I inserted an updated graph]:

"...there was some discussion about whether Canada is in a real estate bubble. Everyone pretty much agrees about Vancouver, but here are a couple of points that were made about the national scene:

1. It is reasonable to claim that there is not a housing bubble in Canada because only certain areas are over inflated.
2. Vancouver's very high prices skew the national average and cause Canada to look worse than it really is.

One thing I think we can all agree on is that the US did have a housing bubble. Well I put together a spreadsheet that I feel shows that affordability is about as bad across Canada as it was in the US at their peak. It also shows that Vancouver is not skewing our national data any more than the most overpriced cities in the US were skewing their data. In order to measure affordability I used house price to personal income ratios. I compared the 20 cities used in the Case Shiller Housing Index to the 6 cities used in the Teranet Housing Index. The US data is from 2006 while the Canadian data is from 2009.

I think the following graph most clearly illustrates my point: 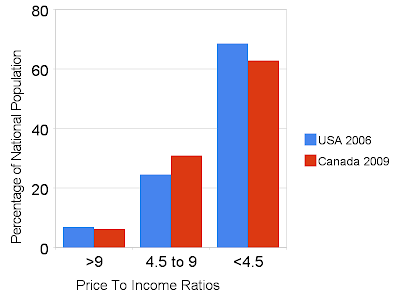 The distribution and average ratios for both countries are almost identical.

(Highlighting above is mine.)

These data would be less of a concern if sales volume were low but, based on the volume of sales in the past several years, we know a not-insignificant portion of the population have bought at high prices. In addition we know the make-up of personal debt in Canada has been trending into the "unsustainable" territory, throwing into serious question the argument that future income gains justify high prices, even in part.

Not sure if you've seen this Edwards Jones report.
http://tinyurl.com/2c59gum
I've been looking for hard data on equity withdrawal in Canada for a long time, finally a snippet.
In 2008, 22% of homeowners with mortgages took an average of $41,000 in equity (14% of the average value)
22% of mortgages holders tapped their ATM machine! That is more than I thought, and for more $ than I thought.
Mohican, Jesse, others: Any thoughts? Any more data available on how many people have thought spending money they had when really they were just taking on more debt?

Try convincing the housing shills in BC about it though...they are as deaf and blind as the idiots once found in the California housing market....of which some still roam around.