It was recently reported that "British Columbia saw a surprising 86.5-per-cent surge in the value of building permits issued in February". Jeff Meggs has commented that Vancouver joins construction upturn. Well great. Thanks for Jeff Meggs and ht to Frances Bula for pointing me to the city's permits data. Let's take a closer look!

I am presenting data mostly from 2007 and 2008 as an indication of whether the construction downturn we are hearing about is observable. I will be showing the graphs but not much in the way of quantitative analysis. I urge readers to not read too much into what they see as a "trend"; there are definite statistically significant differences for sure just by using the old eyeball but try not to imagine things not really present that suit the argument you are trying to make.

First let's look at total construction value. 2007 and early 2008 had many spikes. 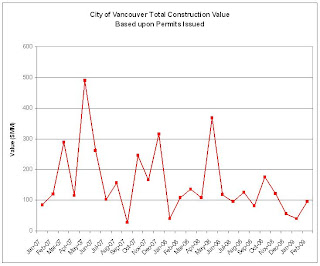 We next drill into residential permits. Below are the totals. It is evident that 2008 was not a stellar year for total permit value compared to 2007. This is mostly due to large condo projects not starting up. 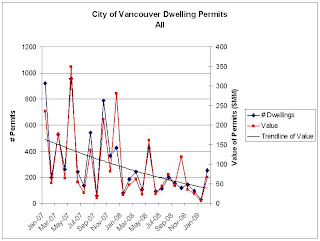 Here are the graphs for 1-2 dwelling permits and multi-dwelling (i.e. condo) permits: 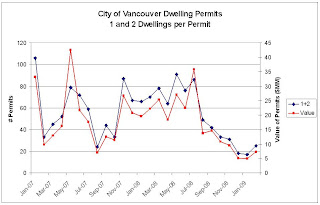 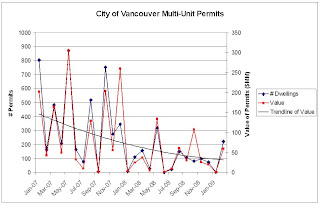 Interesting that in '08 there was a drop in SFH/duplex permits (in the second half) and what looks to be a statistically significant drop in condos for pretty much the full year. This seems to fit with the news stories we have been hearing in the past year, of new large scale residential projects being cancelled or delayed. The decline in SFH/duplex permits is intriguing.

I plotted the average value per permit of SFH/duplex. Seems rather flat, indicating the construction quality and costs are roughly the same for both 2007 and 2008. I have data from as far back as 2002 showing an increase in SFH construction costs as we have suspected. 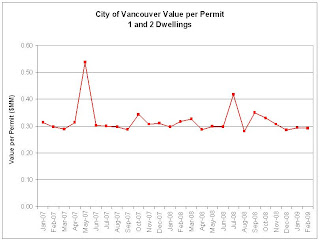 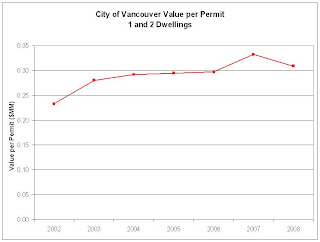 Another thing the city tracks is renovation and addition permits. There is nothing to indicate a drop in permits from 2007 to 2008. 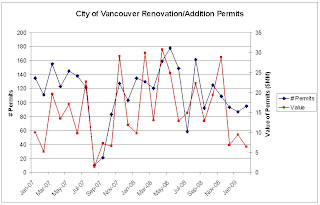 An interesting indicator is tracking demolitions. Here we can see fewer demos in the second half of 2008, ticking up in February 2009 (this is likely one or more multi-unit demos; there are only 35 permits for 110 demolitions). There is no discernable trend over the past 7 years. 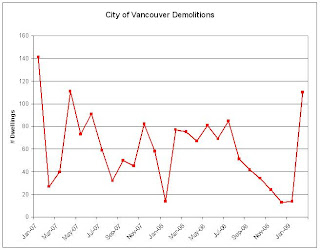 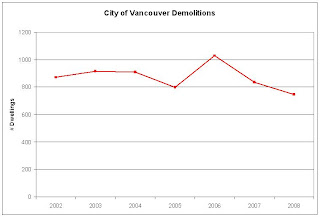 Overall we can see that the initial claims that Febrary is "picking up the pace" is perhaps a bit too quick because January had zero large condo permit applications and February had one. Late 2008 and 2009 look to be filled with "shot noise" condo permits so the data in terms of % change month over month will be more striking.

The graphs also point towards what the city looks for to rate the construction industry's success. Based upon volume, the city is extremely dependent upon condos; roughly 50% of construction spend goes to condos based upon permits issued. When no new condos sprout up, so does half the city's permit-related construction GDP and, to a lesser degree, a drop in permit revenues for the city.

The other striking observation is where the city's new dwellings are coming from. Around 80% of all dwelling permits issued are for multi-unit constructions, only 20% for SFH and duplex. Vancouver is being built up, literally. Total dwellings do not include unendorsed basement suites. If we assume most SFHs contain 2 basement suites (as is currently the norm), the total number of dwellings attributed to SFH construction increases but so too do the total dwellings produced. City Hall would be well advised to understand where a good third (more recently over half!) of the actual dwellings are being built. Based upon the data there is some credence to Vancouver detached properties having some densification premium, with all the caveats that go along with such assumptions.

Mohican - your charts are remarkable. Thanks for all the hard work you put into it.

BTW- I put up a post on the state of our media which I think everyone should read. Hope you dont mind putting a link up:

What I really want to know is there was one permit for 81 dwellings in October 2008 totalling $108MM. That's $1.3MM per dwelling. Is this mixed use categorized as residential or are we really a playground for the 81 more rich types?