Let's round out this busy week with some hard data on Vancouver's new home market for the month of August 2007.

Housing starts were well above average, at 1855, during August with developers focusing on starting new multi-family units around the Lower Mainland. 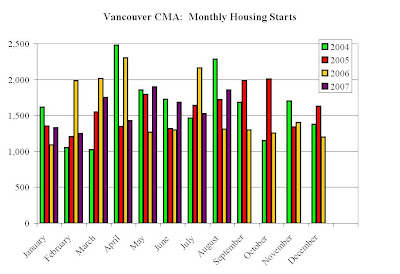 Housing unit completions were above average in August as well with 1386 new units coming available in the Vancouver CMA during August. 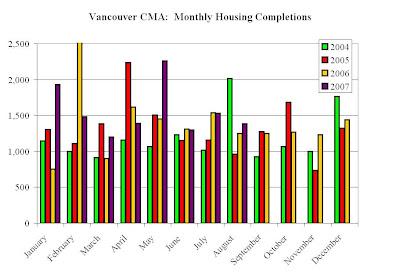 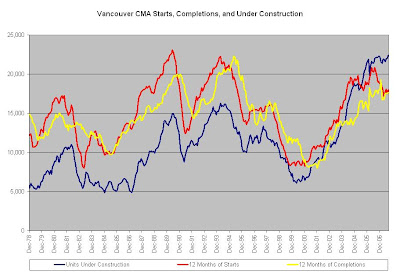 Some interesting highlights from the report:

A number I have been paying attention to in the report lately is the Completed but Not Absorbed metric. It has been increasing drastically representing a fairly severe slowing in new home demand.

One thing to watch here during this fall/winter is the beginning of some competition between developers wanting to unload completed inventory. They will compete with each other and with existing homes for sale in order to avoid carrying the inventory for a long time. This is especially the case when the pipeline is already full of projects just months away from completion.

Any chance you're planning on updating the inventory charts soon? It's been forever!

christine - I don't intend to post the inventory charts anymore as there are other sources for that info.

I was posting the "Chipman Index" as a rehash of the numbers available on Rob Chipman's blog but I don't know what area he covers and its a little convoluted. Additionally, RESteven is posting numbers daily for the Greater Vancouver and Fraser Valley Real Estate Boards with housing type breakdowns. His site is the one I recommend for your inventory info. Cheers.

One thing to watch here during this fall/winter is the beginning of some competition between developers wanting to unload completed inventory.

Good point. If the market starts backing up (it hasn't yet, but it is inevitable), the developers are under no illusions as to what is up, and will discount tout de suite. The U.S. developers did just that, though early discounts were incentives which hid the size of the declines. They still discount, but now there are double digit price discounts versus identical homes in developments sold a year or so ago. Truly apples to apples in other words.

"...the developers are under no illusions as to what is up, and will discount tout de suite.

I'm not so sure. There have been several false starts to a crash, notably last Fall and Fall '04. Many won't know until they know.

That said, for some developers, the reason to sell quickly may simply be a matter of cash flow, not divine prescience.

jesse - I tend to agree with your point of view. The developers don't know when a crash will hit but they know what to do when their inventory starts backing up - what any good business does to avoid a cash crunch - they sell it for whatever they can get.

The last thing any business wants is sitting on inventory that you owe money on. Developers pay for the construction of their projects via large commercial lines of credit. They don't want to service that debt for any longer than necessary - its not part of their business plan.

I'm not persuaded that the building community, in the aggregate, is all that mindful of warnings on the horizon.

Multi-billion dollar builders in the US such as Pulte, Toll Brothers, Lennar, Dominion, Honovan (the list goes on and on) all got caught with their pants down. Since the meltdown started 18 months ago, quarter after quarter these same companies are unpleasantly surprised with a continued downward spiral. They had been citing bottom after bottom however now most of them have given up trying to call one.

I suspect there are hundreds of builders, big and small, who are constructing like mad to get in while the getting is good here in the Lower Mainland. As sure as the sun rises, they will overbuild (and probably are already), only to be rudely awakened by supply and demand realities.

Frankly, I think most builders are no more realistic about what the market can bear, ultimately, than the rank and file.

I'm not so sure. There have been several false starts to a crash, notably last Fall and Fall '04.

Yeah, but that was an era ago. In '04 the US was still going gangbusters, and the big boom in Alberta was yet to happen.

The whole US is now clearly going down in flames, Alberta is now declining, and credit markets around the world are getting the bends.

The developers may wear rose-coloured glasses while the market is rising, but once the party is over they get real quickly. They were the first to cut and run south of the border and they will be the first here.

That is exactly what I meant. I am in no way or form suggesting that developers are better than anybody else at predicting peak. But I do believe that they know we are in a bubble, and are just making as much money as they can while the going is good.

Hence, once it looks like the ship is thinking, the developers will be very quick to rush for the exits, unlike other oblivious individuals whose Rennie glasses will think all is well.

U.S. prices have come down a fair bit (in light of the fact that man "experts" never thought they'd come down at all"), and that would have taken much longer had builders not slashed new home prices. That and foreclosures are what is driving prices down. Sellers of existing homes are the other shoe, and that one hasn't dropped yet.

Also, in the past, somebody (Chipman?) raised the argument that builders were very confident, so the market must be in good shape. Who'd you rather believe a bunch of whiney bloggers who say that the numbers don't add up, or a bigshot developer like Robert Toll? History answered that for us.

Multi-billion dollar builders in the US such as Pulte, Toll Brothers, Lennar, Dominion, Honovan (the list goes on and on) all got caught with their pants down.

Bob Toll for one had his pants well buttoned. He started unloading his stock and options back in 2005 and his exposure to TB is down substantially.

If you want to know what people are really thinking, watch what they do with their own money, not OPM.

"The developers may wear rose-coloured glasses while the market is rising, but once the party is over they get real quickly."

I agree here. It seems obvious to me that developers can last at least 1-2 quarters of stagnation or marginally declining prices without starting fire sales. We will have to see, when the time comes, if they can last longer (i.e. if we ever have a Spring sales season that bellyflops). I am pretty sure they cannot; the market is too competitive to have everyone hold much of a rainy day fund.

It seems obvious to me that developers can last at least 1-2 quarters of stagnation or marginally declining prices without starting fire sales.

I think you are looking in the wrong place. It is inventory (ie. unsold buildings) that will cause developers to discount, not stagnation of price levels.