Mohican has been kind enough to add me as a contributor. I've taken on the task of keeping VHB's famous condo graph up to date. In addition to this, I've taken what VHB has done for Van West and done the same for Van East. 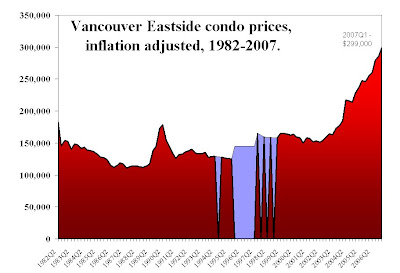 In the last Quarter Reported, Van East Condos reached a new high of 299,000. Unfortunately, the data for Van East is not as comprehensive as that for Van West. I've used VHB's method of assigning values of the average of present data on either side of the missing data point. Data is missing from 1995Q3 to 1997Q2, then the data is missing every second quarter for a year and a half.
Here we see Royal LePage Prices for East Vancouver bungalows and condos for the time period 1982Q2 to 2007Q1. All prices are stated in 2007Q1 dollars. Detached Bungalows reached a high of $542,000 in the last quarter reported. 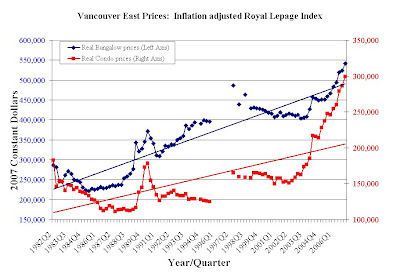 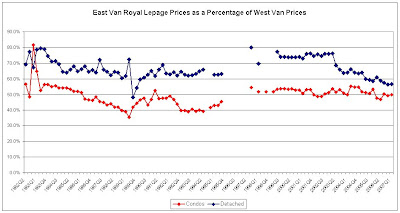 The relationship between condos was fairly stable. However Van West homes pull further and further away from East Van homes starting in the first half of 2003. Whether this implies Van East homes are now under priced or Van West homes are just that much more into bubble price territory...well that's yet to be seen.
Update: Here's Royal Lepage Numbers for Condos/Bungalows for the West Side and East Side. 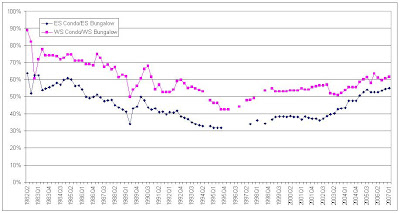 It seems price compression may not be as viable a theory as perhaps we first thought.

Blogger tip - To make images clickable you must select "none" as the justification for the image and choose the largest size.

And thanks for clearing up how to post pictures. I'm fixing the images now.

Yes, I was expecting Van West money to overflow into East Van and drive the prices closer.

I'm considering taking an area that Royal LePage reports on out in the FV to see if those prices are closing in on either East Van or Van West.

Or, maybe vancouvers different, but on the West Side it's even more different.

Maybe there are too many areas in east van that have a little too much "character". So if you are looking for a more west sidish neighborhood you might just head to Burnaby or Richmond. I guess we don't have those charts though.

One (very slim) anecdotal data point talking to a friend who used to live in East Van. He said he decided to move to Richmond after someone stole his BBQ out of his garage.

Thanks for the charts, woodenhorse.

On the East/West ratio: you may find a higher rate of building on the East side recently, which would partially explain the "compression": new houses on the East narrow the gap compared to 3 bedroom bungalows on the West. Unless Royal LePage charts benchmark prices.

I live in East Van. I have to say the poor reputation it gets is largely due to a few bad areas. It is of course over-valued, but when I travel through kits and see far more bums and street people than my own 'hood, I smile.

I think this price compression phenomena is limited to housing types (how many condos does it take to buy a single family home) rather than geographic areas for some reason. Possibly, we are looking at the wrong geographic areas too?

I see price compresssion in your graph (condos versus detached) and in a similar graph for the Fraser Valley that I have. Condos have clearly outperformed SFH or Attached over the past 5 years by quite a large margin.

And thanks to mohican for opening it up to woodenhorse.

jesse: keep in mind this is ES bungalow/WS bungalow and ES condo/WS condo. The dip at the end of the detached line implies that WS bungalow outperformed ES bungalow.

I believe that the Royal LePage numbers are not benchmarked, but I'll look into this to confirm the methodology

mohican: In both areas there is compression between types. However (and I'll add this to the post) it seems more like a return to historical ratios. Which is surprising. Notice how close they are back in the early 80s.

Thanks for these, woodenhorse. I'm glad you're keeping up with the numbers. The east-west stuff is super interesting.

VHB: Thanks, that means a lot coming from you.

Question: Since you're quite aware of the limitations of the Royal Lepage Dataset is there any type/location contrast that you think would be helpful? I was surprised by the odd selection of cities when you pick the greater vancouver area.

Great work guys, really nice to see you carrying on with the numbers, I look forward to more posts from you Woodenhorse.

VHB: how's the new life? You're missed, but you knew that didn't you?