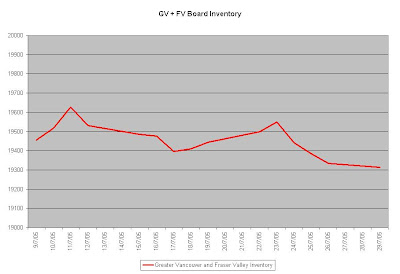 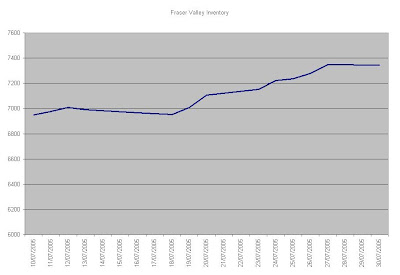 Greater Vancouver has seen a drawdown of inventory because of very brisk sales volumes. I don't know who can afford to buy at these prices but, whoever they are, they are buying. 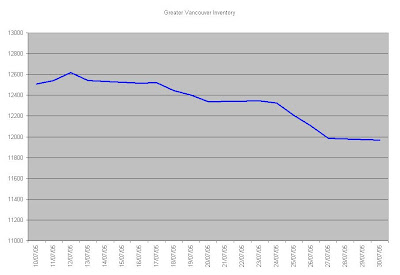 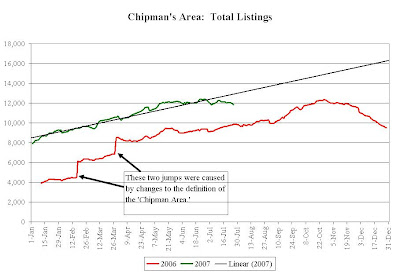 Any predictions for the stats release? I predict yet higher prices in all categories for the GV and a mix of price changes in the FV. I have thought all along that when the correction comes to our real estate market that it will begin in the Fraser Valley and other outlying areas. We may be in the beginning of that divergence.
Posted by mohican at 7/31/2007 08:08:00 AM

It would be interesting to see which areas in GV start to decline first. I am not convinced that the high-flyers (i.e. Yaletown, Coal Harbour) will be the first to go down, as they have the biggest recognition factor with overseas investors, and they are the areas with highest demand right now.

Also interesting will be the effect of the new social housing mega-development in PoCo on the DTES developments. The concentration of urban poor are the biggest impediment to value growth there.

If it is pre-approvals driving sales, July prices should pop still higher. If it isn't, then I don't know what gives.

Of course, once the pre-approvals expire or are used, that only leaves future potential buyers with higher borrowing costs.

I still suspect that the banks must be concerned about Vancouver in particular. IMHO the relatively slim margins on loans do not compensate for the risks, even with with 25% down.

The fact that buyers have unlimited risk tolerance does not mean that lenders do. Especially after the school of hard knocks experienced down south. I would not be surprised if the risk management department is not urgently trying to be heard.

My personal take on the future price changes is this:

The areas to decline first will be detached homes in far flung suburbia (Langley, Abbotsford, Mission, Maple Ridge, Surrey). I expect that decline to be fairly subdued compared to the following declines in attached and apartments - first in suburbia then in the city. The city will likely see the biggest percentage price drops because it is also the most overvalued - on a fundamental earnings basis.

My conclusion is that, as in previous corrections, the Fraser Valley will witness the first price declines but will be more subdued than the following price declines in the city.

Mohican, I'm with you on the prediction. Van prices should be up, FV mixed. And it looks like inventory, at least from Langley on up the valley, is up substantially. But it wouldn't surprise me to see prices have gone up there as well. Certainly asking prices still seem to be on the way up.

I'm not sure I agree on the price declines in the FV being more subdued, however. Near as I can tell house prices are just as out of whack in Abbotsford as in the big smoke, percentage-wise.

oh please - you may be correct about the upcoming correction being just as severe in the Valley but from what I see it sure seems that, as a multiple of price / rent, the FV is at a lower multiple than the GV. This leads me to believe that it offers relatively better value and less downside risk. I could be wrong about this for various reasons though because of potential upcoming supply imbalances that could shift supply / demand very drastically.

For example, Langley and Surrey are permitting new supply faster than the developers can market and build the units right now and the developers will be stuck with the raw land or partially completed housing stock if the downturn comes soon, before they have a chance to sell it. This is what has happened in Las Vegas, Phoenix, etc. The developers will unload their land and unsold homes by dropping prices drastically and the follow on effect of that will be felt dramatically in the existing home market. IMHO.

I see it sure seems that, as a multiple of price / rent, the FV is at a lower multiple than the GV.

But the higher GV P/E could be justified by the fact that it is more central and therefore deservedly has a speculative density premium priced in. For example, an SFH near Metrotown has much higher potential for densification than say a Langley SFH. My guess is that downtown condo gets it worst, then suburban medium density, then suburban SFH, then urban SFH. Not sure about Westside SFH, however, seems very pricey, so lots of downside.

I can see rents falling in the FV. Housing supply is housing supply and a lot of it is being built with moderate population growth.

Is it possible that the FV sales are declining due to increasing financing problems for lower income borrowers? The beginning of the contraction.

Is it possible that the FV sales are declining due to increasing financing problems for lower income borrowers?

What if the pool of buyers is simply exhausted?

I'd suspect that most of speculative buying occurs in GV, and the vast majority of buying in FV is for ownership. If that is true, running out of buyers would be noticed in FV first. This may of course be occuring in the GV as well, but could be masked by:

I'd suspect that most of speculative buying occurs in GV, and the vast majority of buying in FV is for ownership.

There is plenty-o-speculation out here in the FV but we lack one type of speculator - the-sight-unseen-whatever-price-you-want-i-will-buy-it-speculator.

We have plenty of flippers, assignment sales, raw land purchasers, and more. To boot, Surrey, Langley have higher average incomes than Vancouver.

There is plenty-o-speculation out here in the FV

On that topic, how have FV rents fared in the last little while? Are they coming under pressure?

-my cousin works at the bank and said there has been a recent big wave of young people coming in for mortgages in anticipation of the predicted September interest rate increase.

"On that topic, how have FV rents fared in the last little while? Are they coming under pressure?"

Rents have risen in the past couple of years in the range of 2%-5% / year depending on the area from what I can see. Nothing crazy and good deals are still out there. What I am noticing more of in the past 6 months is a lot more supply in the new construction areas. Townhouses, condos, coach houses and basement suites all for rent. They are new so the owners are asking top dollar. Brand new townhouses, which sell for $350k will rent for $1500 / month. Brand new 4 bdr executive home which sells for $600k will rent two upper floors for $2000 / month. A 2 bdr basement suite in the same home will rent for $800-$900.

Some areas are in high demand by renters so owners have the negotiating power but other areas are not and have lots of supply. The less expensive options - eg - basement suites in the $600 - $800 / mo range are in the tightest supply right now and I have heard of 15-20 renters going for the same place sometimes.

Odd, its as if prices are set and vacancies regulate the market rather than the other way around. Especially strange since a lot of the supply is offerered by independent small operators.

As for the pre-approvals, I agree, it has the explain at least part of the brisk GV sales in July. Again, there is at least some lag between when a sale is made and when it is booked on MLS.

My impression is that with a lot of newly completed construction the owner wants to maintain the new look and as such does not want "low rent" people living there. They seem to be willing to let their places sit vacant while waiting for tenants who are willing to pay the price.

Many people can't afford these higher rents so when more affordable options come available they abandon their current high rent place in favour of the lower priced option. This obviously results, as expected, in a higher turnover in newer and higher priced accomodations and a fairly high demand for the lower priced units.

I'm looking at what's going on in the US and I must say its horridly fascinating. But I wonder when does this credit crunch arrive in Canada?

My hunch is that the speculative buys of condos in the valley, recreational property in the Okanagan, whatever, have been financed by people using their principal homes. Now, what greater cash cow has there been but the homes in Vancouver westside? You can take one of those puppies and leverage it out. I think what can bring this all down very quickly is when the "investment" properties become the alabtross around someone's neck and someone starts making margin calls.

the owner wants to maintain the new look and as such does not want "low rent" people living there. They seem to be willing to let their places sit vacant while waiting for tenants who are willing to pay the price.

This appears to be the rental version of the "I'm not giving it away" school of selling south of the border. Just hold out and someone will come along and pay you an above-market price.

Someone should tell these fools that "quality" tenants can negotiate less rent than the bozos, because they present less risk to the landlord.

You are probably right expo 86'.
We bought land on one of the Howe Sound Islands. Getting a mortgage for raw land is either impossible, or interest rates are much higher than on built houses, so getting a home equity loan (fixed) was the cheapest borrowing cost, once our cabin is built we will mortgage it and remove our home equity loan (my husband is building his own cabin, so labour coasts will not be a factor - except for septic). Others have done the same, since raw land is more expensive to get a loan for than built land (no wonder developers need pre-sales).