REBGV released its sales and listings data for June 2016. 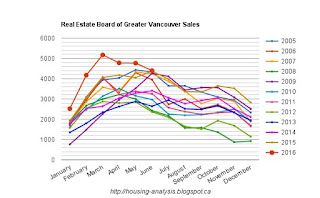 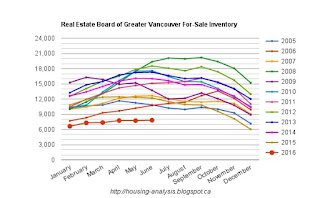 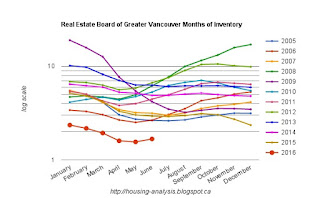 New listings have been highish but not compared to all past years. For those who are claiming that higher prices will start effecting people to list, and that we are starting to see that now (cuz ECON 101), it appears that the effect, if present, is not as pronounced as having a good old-fashioned recession. 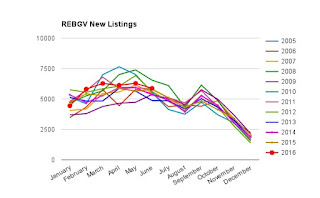 The ratio of sales to new listings is high and this has meant inventory has remained very low. 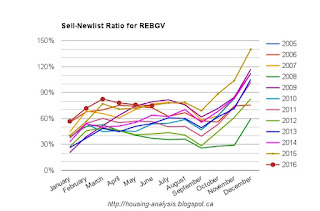 Low months of inventory will lead to higher price increases. MOI is now below 2 (that's low). Key point: returning the market to "normal" in terms of house price appreciation (prices rising at a bit above inflation) will require a lower-than-average sell-newlist ratio for many months. It is not enough to return sell-newlist to the average; it needs to drop further. The mechanics of getting to "normal" should not be ignored. We are far from "normal" right now.
Posted by jesse at 7/05/2016 12:30:00 PM

Welcome back, hope to find more posts here in the nearest future.

I wonder if it is possible to reproduce the same kind of graphs but for detached, attached and apartments separately?

First, you can validate the relationship between MOI and Price dynamics for each segment. Aka confirmation.

Second, you can look at delayed relationship between those market niches.

So glad to see you're posting again. I stopped checking your site for a long time and decided to randomly do so today. Please keep the insightful analysis coming!

This is really interesting analysis! I was actually looking to play with the data a bit myself and was wondering if you knew whether the Vancouver Real Estate Board's monthly reports are available anywhere in excel format? Would love to see how this looks decomposed by district.

Unknown, my data are here
https://docs.google.com/spreadsheets/d/1zfoMB7JyEx9LYN-HMWbD0FHobbNRQbpBpTszj1h_oDg/edit?usp=sharing

Dmitriy, I don't have breakdown for sub-markets but REBGV does have the data on their website. I haven't gone into that level of detail; I'm an old wily veteran at this "housing analysis blogging" thing and I don't see a lot of value in deep-diving too far.

Ryan, thanks. I hope to continue for a few posts. Since late-2015, things have started to get interesting again.