Blogger VHB used to post the so-called "renewal gap", the difference between current mortgage rates and rates "N" years ago, where "N" is the mortgage term. So here it is, updated to May 31, 2011: 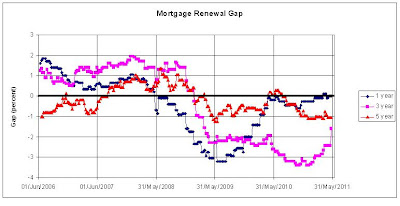 Note the 3 and 5 year rates are still at negative gap, meaning that homeowners renewing their mortgages today can receive lower monthly payments, and this has been the case for just over two years now.
Why is the renewal gap important? The gap indicates how much financial relief current homeowners can receive when they renew. As we can see, until the end of 2008, the renewal gap was positive. Since then the gap has been negative for the past few years this means that cohorts of mortgage holders have been receiving relief in the form of lower monthly payments for close to 3 years now and counting.
With some consensus that rates may start edging up as the economy improves and employment reaches towards full capacity, it is worth looking at what could happen to the renewal gap in years ahead. To help with picturing this, I have extrapolated mortgage rates at a high and low end: at the low end assuming "flat" rates for the next 3 years, at the high end assuming a linear extrapolation to the "max" mortgage rate seen in the past 10 years in mid-2014, as shown below: 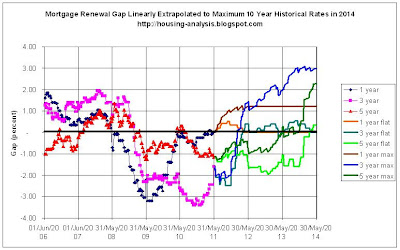 So the scenarios play out as follows. First the "flat":
And "max":
There are other scenarios, of course, but if one believes the Bank of Canada's statement, that the recovery will be "sluggish" in the coming years, I have chosen a "sluggish" return to full capacity. Of course if the elusive bond vigilantes rear their heads, all bets are off.
Posted by jesse at 6/02/2011 05:00:00 PM

Looks good to me, my 5 year renewal is coming up in early 2012. Last term I should have gone variable. I wonder if I should still switch to variable like i had planned with rates seemingly rising in the foreseeable future.

Great blog. All posts have something to learn. Your work is very good and i appreciate you and hopping for some more informative posts,
Purchase