There has been much ado about the upcoming CMHC changes to requirements for qualifying for mortgage insurance. Some basic math has been done by local bloggers here and here.

For some speculative investors, the upcoming changes will have significant impact as they are required to carry a higher downpayment. In addition homeowners cannot carry higher than about 90% LTV for refinancings and be insured. This does not mean that this part of the market is cut out, only that people borrowing with higher leverage face significantly higher financing costs in the way of non-government-backed loans.

The important change for owner-occupiers comes in the form of changing the requirement that qualification be based on, at minimum, meeting the standards for a 5 year fixed rate mortgage instead of a 3 year fixed rate mortgage. Here is where the confusion starts. First, we are unsure if CMHC requires banks qualify customers at their posted or "discounted" rates. A quick perusal of CMHC's website yielded no definitive answer though perhaps a reader can let me know what they do now. (I will save the rant on CMHC's lack of transparency for another day.) I am assuming, for now, that they use some semblance discounted rates, only because some lenders advertise close to fully discounted rates anyways. The change from 3 to 5 year, I assume, would follow the same general policy. (Update: apparently they will use 5 year posted. See mohican's link in the comments.)

Second, a quick look at posted rates shows 3-5 year spreads as high as 2% and as low as 1%. Taking the spread to be 2%, the amount for which a borrower is maximally qualified drops by just over 20%; at a 1% spread this drops to about 10%. If we assume the entire market is comprised of buyers maxing out what they can afford, we would expect the market to drop by 10-20% on this change alone. The market of course is not solely comprised of people leveraging themselves so as to require mortgage insurance and/or people maximising their affordability limits. While we do know many are taking on high levels of debt to become homeowners there is not much publicly available data to show the finances of those who are buying. You can bet the banks have these data. (Related, banks were the ones openly calling for the government to tighten its mortgage insurance qualification rules.)

Third, an interesting point is that spreads between 3 year and 5 year mortgages are extremely high compared to even 2 years ago when the spread was no more than a few hundred basis points. This is a product of the low end of the yield curve clamped near zero by the Bank of Canada. 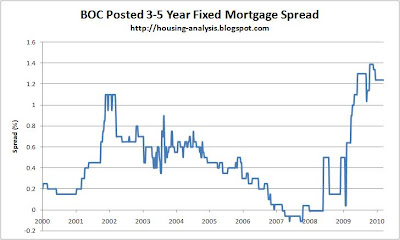 When the Bank raises rates, as experts are expecting later this year, we expect the 3-5 year spread to narrow. In other words, while the changes to CMHC policy will have some advanced impact on demand, the longer-term impact in and of the policy change itself will be muted by 3 year rates eventually climbing closer to 5 year rates anyways. There is also no rule that says that 5 year rates cannot fall to the current 3 year rate but I don't have a good feeling for how likely this is.

How will the CMHC changes affect the market? A fringe of able investors will be cut out -- most markedly in the buy-to-let investment arena -- and this has real potential to be a catalyst for what this blog believes is an eventual return to lower price-to-rent and price-to-income ratios. Taking a step back, higher debt levels, rising unemployment, government spending cuts, dwelling under-utilisation, and a reliance on relative (not absolute) pricing by marginal buyers all indicate marginal pricing is unsustainable. The CMHC policy changes do not and can not change this blog's thesis one iota.
Posted by jesse at 3/10/2010 09:21:00 PM

Google Ads, you're my hero.

It appears that the 'posted' rate will be used, with 'posted' meaning what the Bank of Canada publishes each week. http://tinyurl.com/ygdnk6k

I'm more interested how the new HST in BC will affect home prices, last I read; unless I'm mistaken. A rebate will be awarded up to 20k for houses 525k and over. I wonder how many people will rush to buy before and how people will price their houses and skew numbers for a while.

People keep talking about the HST's impact on house prices. I'm not sure this impact will be significant. Used residential property is exempt therefore no HST would apply. HST would only apply on new residential property, with a rebate available on the purchase. Unless the new housing market makes up a bigger percentage of the market than I'm aware of?

One important point is that the CMHC changes to the variable rate qualification only applies to, well, variable rate mortgages. As mohican's link points out people can still qualify for a 3 year fixed and obtain mortgage insurance. The only difference is they have to pay the 3 year rate instead of the lower variable rate. Since they were qualified for the 3 year rate they can afford it but now have to sacrifice spending (unless they were saving the difference...).

I see the requirement to have a minimum 20% downpayment for investors having the largest impact. Even then, there are ways around the 20% downpayment; the obvious one being the presale bandwagon.

Here is the final word on the whole 'qualifying' rate deal. a pdf on CMHC letterhead.

less than 5 year term, you use the posted 5-yr rate as given by the Bank of Canada. greater or=5 years, you use the contract rate.

oops thx VHB for clarification. My comment above regarding 3 year qualification is incorrect.

The HST seems like a whole lot of nothing to me. Investors have lots of other options than property to invest in without paying any HST.

Agreed - HST is a non-event.

The CMHC rule changes take out a few people at the margins and perhaps a creative mortgage broker will likely be able to still get them qualified.

I think the HST kind of just adds fuel to the fire to the new mortgage rules and higher interest rates ahead which in my opinion will lead to prices going up rapidly during the spring and likely correcting sometime after that.

Roughly 21,000 net new jobs were added in Canada last month, pushing the national unemployment rate down to 8.2 per cent from 8.3 per cent.

But the better news was that 60,200 more workers found full-time employment, offset by a loss of 39,000 part-time jobs.

Many of the full-time jobs went to men over 55, a group of workers that fared better than most during the recession and have marketable skills that companies and public employers want as the economy recovers.

The public sector added 45,600 jobs in February, while private employers shed 7,500 jobs. Those numbers reflect continued growth in health care, education and administration as well as a slow recovery in parts of the economy most hurt by the recession - manufacturing, transport and warehousing.

In response to the February report, the loonie jumped to its highest level in 20 months. The dollar - which has been gaining against the American loonie in recent days - soared above 98 cents U.S. on the news...

Economists have been pointing at the revival of the U.S. economy as a necessary condition for a sustained recovery in Canada, particularly in the second half of 2010, when Ottawa's stimulus dollars begin to run out.

With the U.S. domestic sector rebounding, many suspect a jobs recovery won't be far down the road.

"If we get the U.S. economy starting to gather a little momentum, that would feed a lot of the (Canadian) economy that are still suffering," said Douglas Porter, deputy chief economist with BMO Capital Markets.

"So I don't think it's not obvious that the second half of the Canadian economy is going to be weaker than the first half," as many analysts had previously forecast.

The Canadian jobs numbers were seen as solid evidence the economy was on the mend last month, particularly since they follow January's pickup of 43,000 jobs and they continue a trend that began in July.

Since then, Canada has added 159,000 workers, recovering more than a third of the 417,000 jobs lost at the lowest point of the recession.

Economists said the dollar's rise Friday was supported by the fact the underlying data was even stronger than the headline, with gains in manufacturing and natural resources.

And the gain was not regarded as artificial - owing to the Olympics or unseasonably warm weather in February, the report said.

The Olympic effect was noticeable, but it was mild. There was a pickup of 27,000 additional jobs in the accommodation and food services industries, but only 5,700 were in British Columbia. The warm weather would suggest a boost in construction jobs, but that category fell by 11,000.

"The numbers clearly show that Canada is not having a jobless recovery," said TD Bank deputy chief economist Craig Alexander.

Economists are now expecting first-quarter growth to be in the three-to-four per cent range, following the robust five-per-cent pop in the last quarter of 2009.

If we assume the entire market is comprised of buyers maxing out what they can afford, we would expect the market to drop by 10-20% on this change alone.

You don't have to assume it's the entire market, just the marginal buyers, and I think the latter is a pretty safe assumption.

Once price support is lost at the margin I think this bust will snowball pretty fast, as the latest price peak is based on absolutely optimal parameters, all of which can only go more negative.