The Fraser Valley Real Estate Board has released the monthly statistics package for July 2009. Here is the scoop.

Sales were really, really strong in July. In fact it was the fifth highest monthly sales ever recorded in the FVREB. According the the FVREB, '37% of buyers were first time buyers' which, as they mention, creates a powerful 'ripple effect' of move up buyers. Sales beget more sales. 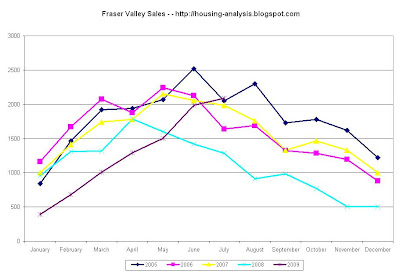 Active listings still rose modestly through the month of July. 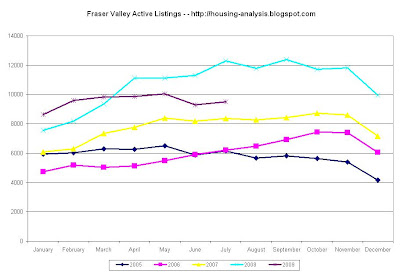 Months of inventory fell slightly to 4.55 which puts the market in 'sellers' territory. 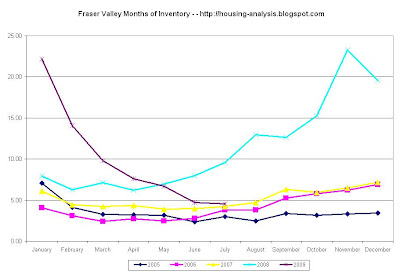 Prices have certainly come up from the lows witnessed in the late winter / early spring but are still below peak levels. 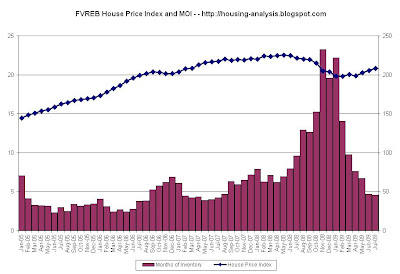 Not surprisingly, higher sales combined with stable inventory has created a market in which prices are rising. Time will tell how long it will last. 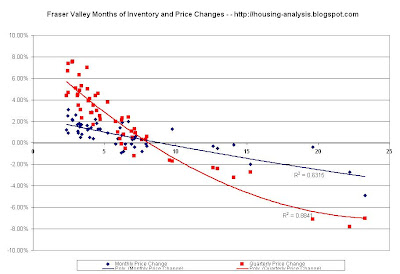 My hunch is that we have seen the last boom month this year in terms of sales and it will be downhill from here as the mortgage preapprovals at the 'ultra-low' rates of the late winter / early spring are expiring now. Don't read this to mean that I think prices are going to fall precipitously from here on out but I do think there will be significant weakness in the later part of this year.
Posted by mohican at 8/06/2009 10:34:00 AM

all bets are off in this market. I learnt my share of lessons. Dont predict anything in short run, things turn on dime, particularly when majority of the voters are homeowners, rationality/responsible behaviour be damned, I am going to count my votes and make my moves accordingly - low interest rates, quantitative easing, CMHC sponsored loans - bring them on. This is as insane as it gets.

It's true, people are crazy.

A person I work with told me she recently bought a place. I asked her if she thought is was a good time to buy, trying not to sound like an ass hole putting down her decision. She replied, "I don't know, I had been renting for a while saving some money and wanted to own, so I went to the bank to see what I could get. They gave me a number, I found something I liked in that price range so i bought it."

Basically she made it sound like she was putting up with renting until she had a big enough down payment to get a decent place. She probably didn't even really consider the fact that her monthly payment would be higher or that she would be pretty screwed if she lost her job.

I didnt ask anymore questions because I didnt want to make her regret her decision, but it seemed to me that she just wanted to own for the sake of owning, and nothing more.

It seems like people have it pounded into their heads that owning is the way to go. So many times I have been told I should buy a place if I can afford it. I probably could afford a semi decent place, but for a lower monthly payment I can live in a place that I could not afford to own and still have about 1200 bucks a month to squirrel away for a rainy day or a down payment.