Here is a quick update on the work mohican and I did in spring 2008 around refining mohican's work tracking price changes and months of inventory. Remember that the best fit was to track half-over-half (i.e. 6 months over 6 months) price changes to a three month moving average of months of inventory (total active listings at the end of the month divided by the sales in that month). 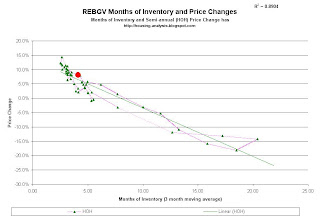 Remarkably the correlation is disturbingly accurate into the downturn. Looking forward we can see how well the model has "predicted" the next month's price movements. 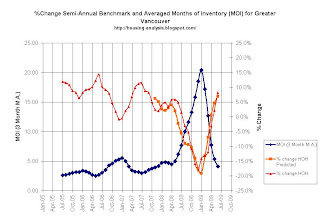 Weak-minded fool that I am, I second-guessed myself and thought the benchmark would come in at $690K, though if I had stuck to the model I would have been closer. I am at a loss to explain the reason for how well this model has done in Vancouver. Other cities where I have tried to run similar analysis show nowhere near as tight a correlation between months of inventory and price changes. Since the causation underlying this model is not well understood the model is interesting but not much more -- it will track until it doesn't.

If you're flabbergasted by the market's recent strength, consider affordability has improved close to 30% in the past year (thanks for pointing this out, fish10). That's a Brobdingnagian shift, even with aggregate incomes coming under severe pressure.
Posted by jesse at 7/04/2009 10:25:00 PM

Positing possible causal links to psychological variables is a fools game- but its Sunday, so why not.

I would think that the desire to own real estate is more likely a constant than a variable. A condition that is not likely to change unless there is a fundamental change in the market place which directly affects potential owners, such as job loses or increased financing costs which cause foreclosures- changing the can't lose paradigm associated with real estate.

So I guess the leading indicators would be employment, financing cost, and seller expectations.

Either that, or Vancouver is just different wherein it is not affected by the same macro-economic factors as the rest of the world. As those in the industry would have us believe.

Sounds like a great thesis for any budding economist.

The 30 percent drop was about 10 percent price and 20 percent interest rate drops. I personally am currently discounting the interest rate drop portion because I don't think it is sustainable. It looks like most people are counting on it 100 percent even ones that are going variable.

Can interest rates stay low enough long enough for this to effectively count as a real 30 percent drop? I think this would have to be on the order of ~10 years? Would the government have the stomach to raise rates even if it would devastate a large portion of the population?

What are other people's opinions?

RS - It isn't so much about what the government decides to do but what the lending institutions are able to do. If loan losses mount we will see credit get tighter and tighter which will make it very difficult to borrow.

For existing borrowers, it is very possible that rates could be low for a very long time. Very = 5+ years.