It is true, some houses are selling. Some people are buying. In fact, more than in January. Some people seem to think that this heralds the end of the troubles.

I don't think so.

Sales in February are on pace for a 44% drop from 2008. But you must remember that 2008 was not a good February--the slowdown had already started. Here are the February numbers from the past few years, all taken from the REBGV releases:

So, we'll be off roughly 50% from a typical 'good' February, in terms of sales.

What about prices? We saw an uptick on benchmark prices in January. Was this the start of a big upward bounce or a seasonal effect? 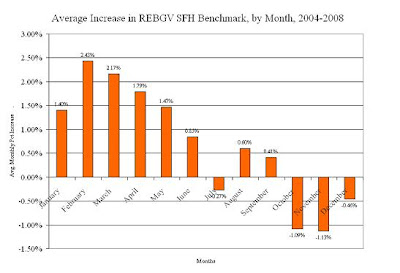 (Note: This graph is not endorsed by the REBGV.)

February was the month with the highest average month-over-month increase in the REBGV benchmark price for detached houses.

I think this is because of the seasonal patterns of RE. February is not the month many people get desperate and lower their price to sell. In February, dreams of the 'spring selling season' dance in sellers' heads. Maybe the buyers will come! It is at the end of the 'spring selling season' that reality starts to hit. People either cut prices or pull listings and wait till next year.

If you are thinking about buying at some point, what month would make the most sense? Well, in a market that is trending down, it seems like the best deals are likely to be had in the summer, when those who listed with optimism in the spring are starting to think about the reality of going unsold. Were I a buyer, I'd be ready with my lowball offers in a July or better yet a November, not a February. (And, it goes without saying, not in 2009!!!)
Posted by Van Housing Blogger at 2/26/2009 08:06:00 AM

In a hot market with tight supply and rising prices, February is really a great time to buy. In a falling market with abundant supply it is better to wait until fall.

Definitely. My 'July or November' thing is about a falling market. If this were 2007 it would be a different story.

Good article VHB. Your historical perspective is something the spinmeisters avoid like the plague.

In falling markets it is obvious to wait. If you're looking to time when to buy and game for seasonality I'm not so sure.

I ran the regression correlation between month number and MOM detached benchmark price increases and in the boom (2004-present) there is a slope of -0.28%/month and Rsq of 0.25. Compared to Jan 1998-Jan 2002, the "stagnant" situation, the slope is lower -0.11%/month and the Rsq is 0.10. There is no data I can see to suggest that, when the market is "stagnant", it is much better or worse to wait; there is too much variance and the slope is not steep.

It will be interesting to compare this analysis in the upcoming falling markets. Will the same correlation exist as in boom times?

As an initial guess I would say, yes, the slope will indicate MOM price changes will generally be worse in the latter half of the year compared to the former for the reasons you mentioned, VHB. But we are talking, say -0.1% in January and -3% in December, hardly a reason to buy sooner rather than later. And of course come November the picture extends into the next year with potentially more drops to come!

Jesse - given that you're (IMO) not so much looking for a linear trend across the year as much as you are looking for distinct behaviour by season, I'd recommend trying a one way Anova on season (or putting 4 0/1 variables (1 for each season) into the regression, and then see if you get any significant variance by season.

Ah Delcan we go ubernerd so quickly. I ran the ANOVA test (well played...) and the results are as follows, by calendar quarters. I didn't bother with regression only performing Tukey test at 95%CI:

I'm sure there's more here but I still maintain stagnant markets have little in the way of seasonal trends to game; by definition the discrete derivatives must sum to zero if prices are indeed flat (stagnant).

Ahhh! That's more like it. At least you're talking about buying.

1. Does anyone know the reputation of the developer - Greypoint Properties?

2. What's your thought on the value at $350/sq ft? I know your answer is the market will continue to go lower but is this price outrageous?

Thank you for your thoughts.

OT but you HAVE to see the article in the Sun where they interview 3 real estate "experts". Patsy Hui, the realtor, will either have you laughing out loud or banging your head on the desk or both. Link here:
http://www.vancouversun.com/business/real-estate/Talking+real+estate+Welcome+roundtable/1337554/story.html

"1. Does anyone know the reputation of the developer - Greypoint Properties?

Don't know them. Don't vouch for them.

Depends upon what it can rent for. If you can somehow get $2300/mo for this place, that would put this place at about $240/sqft.

3. When a Remax agent is selling these units on behalf of the developer is the agent 5% commission embedded in the price I assume? "

I would suggest you shouldn't care. You offer the price that's fair based upon you receiving a good ROI and whatever they say to try to negotiate is immaterial. They will try every trick in the book about "saving face" and all that. Really when it comes down to it it's all about money and the rest are nasty tricks to make you feel bad.

Ice - I'd hold off buying for now.

1. Greypoint - don't know anything about them. Check the BBB.

2. The price is really steep compared to rent. I'd only consider buying if the cost of rent is more than the cost of buying. If that never happened, then I'd be content to rent.

3. Don't know the specifics of the developers agent arrangements but it is usually project specific from what I've heard and there are often realtor incentives. For example, with the place I purchased the developer was offering a realtor incentive which we negotiated out of the deal so that we got a better price. My realtor was willing to do it because he knew that if we didn't get our price that he wouldn't make a penny.

What if I told you that based on my down payment the rental vs total carrying cost was a diffference of $300?

And I was planning to live in it for 10 years?

Did you negotiate the agent's entire commission? If not what percentage did you allow him to keep?

Here is my situation. If the developer is unwilling to budge on price what value does my agent bring to the table? I might as well negotiate direct by the amount of the suppose buying agent's commission of 2.7%.

<3. Don't know the specifics of the developers agent arrangements but it is usually project specific from what I've heard and there are often realtor incentives. For example, with the place I purchased the developer was offering a realtor incentive which we negotiated out of the deal so that we got a better price. My realtor was willing to do it because he knew that if we didn't get our price that he wouldn't make a penny.>

I base my rent vs buy decision on whether the rent could support the unit in the event that it was 100% financed. This includes all taxes, fees and maintenance.

Your downpayment is irrelavent for decision making aside from it lowering your borrowing costs but it should not factor into your decision making of whether you should buy based on the value that the unit offers when compared to rent.

This is my formula: