The CMHC released the montly housing data for markets across Canada. Here is an updated chart tracking housing starts, completions and units under construction in the Vancouver market. I have included a forecast for 2009 which assumes a significant decline in starts during the year and an uptick in completions near the end of the year as many projects are scheduled to wrap up just before Vancouver hosts the Winter Olympics. 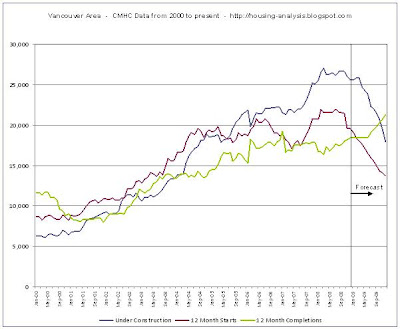 A truly amazing statistic contained in the December data is the number of completed but unsold units. The number of unabsorbed units has risen from 1292 in December 2007 to 2363 in December 2008. Obviously, developers are having trouble selling the units that are now vacant and available. This is why we are seeing these creative marketing tactics and price cuts.
Posted by mohican at 1/26/2009 02:24:00 PM

It's worth noting that while the trend of under construction is decidedly down, it still portends more units coming online over the next 1-2 years than is required to keep pace with population growth. This, in an already saturated market.

A truly amazing statistic contained in the December data is the number of completed but unsold units.

Couldn't agree with you more, and thanks for your tireless efforts to educate. You know, the happy campers who snapped up the Onni "discount" condos literally drove past scores of under-construction housing units on their way to buy. You'd think that might have given them a clue, but we're on the third rock with the Earthlings.

I find another quite interesting statistic is the 12 months of completions projected to spike to over 22,000 by Sept 09. Wasn't 18,000 some sort of record or near record? 22,000 is 10,000 more units than the Vancouver CMA is capable of absorbing based on population growth, for pure housing purposes. Nevermind completed but unabsorbed, owned but not occupied and last year's 34,000 listings which is certain to be equalled this year.

Don't you folks wonder why no one in the media has picked up this incredible, building supply imbalance? Its not like they haven't dropped the shoe about declining prices with predictions for more.

I somewhat expect the completed and unabsorbed units to double yet again through 2009 - over 5000 units perhaps.

The supply problems have only begun to surface in the last six months. They will get appreciably worse by year end. The number of units under construction is mind blowing. Completions are set to take off this year as many projects were managed to coincide the completion dates to just before the winter games.

She is going to be a real blood bath. But a fun blood bath for those on the sidelines.

I wonder how many units currently under construction will not complete at all.

As yes, shades of 1982. Holes in the ground here, foundations there, half-framed buildings everywhere. No abandoned high-rises as I recall - the high-rise districts (Expo lands, Skytrain route, etc) didn't get going until the late 80's.

I mean we can't have stuff like that around when the eyes of the world are on Vancouver in 2010. Potemkin village, anyone?

Anything started in the last 18 months is up for discussion as far as the prospect for the project getting cancelled / shelved.

Developer financing is a major issue right now (according to some folks in commercial banking) and we will begin seeing increasing reluctance to start projects in addition to projects going on hold or getting outright cancelled. The banks will not lend if the project is not sold ahead of time now.

I would hazard a guess that at least 10% of the units currently under construction will not be completed (2500+ units). The sky is the limit though!

What do you guys think we could expect in terms of rentals given all the data? On Craigslist I still see the majority of Downtown apartments with ridiculous monthly rent.

Craigslist mostly reflects "wish rents" not actual market rents. It's generally a poor indicator of what people pay. However, it is a useful tool for gauging supply. I monitor the downtown rental market closely. New condo rents are falling. On larger 1BRs and higher end units, I've seen drops around 8-10% compared to the same time last year. Landlords are also more open to negotiate, especially if you've got a solid credit history.

My signature move is to come to rental showings with my credit report in hand. If I like the place, I make an offer. I prefer not to mess around so I propose what I genuinely believe is a fair price. If they balk, I flash them my credit report, give them my business card and call it a day. By the end of the week, the good landlords are calling me back to negotiate.


I have 2 questions for you. Firstly, where do you like to look for rentals aside from craigslist? Also, for a 1 bedroom downtown, assuming it's like every other downtown condo, what do you feel is fair value?

One of the more amazing aspects of this bubble is how obvious the coming oversupply was. Even without graphs (though I greatly appreciate them).

Last year, a couple we know was talking about how many units were coming onto the market (he was in in construction) and they finished with "It seems like there will be more condos than people can buy? So the prices might come down?" (They said this conclusion like a question, since they were hearing the opposite from all our friends and in the news). It is very hard to stick to fundamentals when they aren't socially supported.

We could have stepped outside the restaurant we were in and seen about 15 cranes. It's no wonder there is such an increase in interest in behavioural economics.

I just finished reading "The Ascent of Money" by Niall Ferguson, which is a history of banking. It's fascinating. We won't stop behaving this way anytime soon...

Tradingedge, keep your eye on Craigslist because it's good to meet landlords and always be looking at places. It will help you get a feel for what's out there. Beyond that, anything you can do that takes more effort than browsing the web will give you an edge. I recommend visiting every building you like and checking in with the concierge. They might have leads on suites for rent.

A fair price depends on a lot of things. You need to consider how much you value the size, location, amenities, finishings, etc. For a newer downtown 1BR with amenities, someone with a budget of around $1200 and the time to negotiate should be able to score a good suite. Timing is key. Be prepared for the process to take time.

"The notion that 'absorption' is meaningfull needs examination. Any property can always absorb more occupants."

Ahh yes. In fact this is why completions can drop well below what is required to absorb population growth without people sleeping on the streets, as we are about to find out.

How To Make money with affiliate programs Today. Affiliate marketing is the easier and probably the most effective method to make money from the internet. It is basically, a kind of selling technique where potential buyers from your website are directed to the websites of sellers. For every click, the website owner gets a small commission.
www.onlineuniversalwork.com