In March, selection reached a 10-year high on the Fraser Valley Real Estate Board’s Multiple Listing Service (MLS®), with the number of active listings reaching 9,361, an increase of 27 per cent compared to the 7,351 listings available during the same month last year. The previous March that offered as much or greater inventory was in 1998, when Fraser Valley had 10,148 active listings. The total number of sales processed through Fraser Valley’s MLS® in March was 1,315, a decrease of 25 per cent compared to March 2007 when 1,743 sales were processed. The number of new listings in March also decreased slightly with the Board receiving 3,277 compared to 3,369 new listings received during the same month last year, a decrease of 3 per cent. 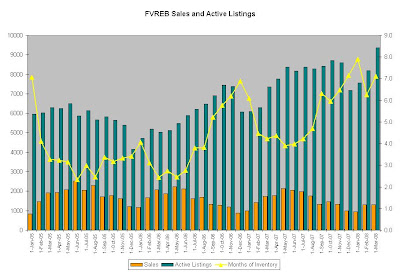 In March, average Fraser Valley home prices continued to increase in the strong single digits for detached and townhomes and remained in the double digits for condominiums.

Kelvin Neufeld, president of the Fraser Valley Real Estate Board explains, “With a significant increase in product and properties taking longer to sell, we have a more competitive market for sellers in the Fraser Valley right now, yet enough demand to keep prices trending upwards. “Our advice is that to sell your home this spring, work with your REALTOR® to ensure it’s priced correctly because buyers are taking a careful look at the broader range of homes available on the MLS®.”

In March, it took almost four days longer on average to sell a Fraser Valley detached home, 50.7 days compared to the 46.9 days during March of last year. Apartments took almost eight days longer to sell with the average days to sell in March at 47.3 compared to 39.4 during the same month last year and townhomes saw the smallest increase in average days to sell, increasing 1.8 days, going from 33.6 in March 2007 to 35.4 days last month. 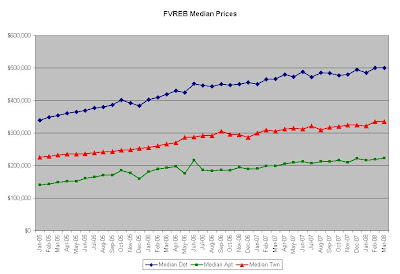 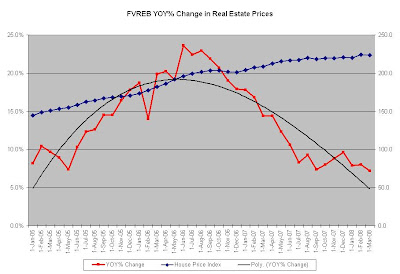 If sales don't pick up soon we could see some really serious price declines here and quickly too. I foresee negative year over year price changes by July if things stay on the current trend. 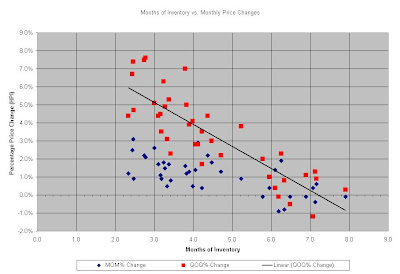 That sales to active listings chart is real pretty.

Prices must be buckling under all tha t inventory.

"If sales don't pick up soon we could see some really serious price declines here and quickly too. I foresee negative year over year price changes by July if things stay on the current trend."

Finally, a sight for sore eyes, I do hope they come crashing down hard and fast.

FV is finished. So much for spring.

It looks promising, but I don't know that I'd call it "finished" just yet.

If April is a continuation of the March tendlines, on the other hand...

As the recent mood change continues to build momentum, inventory will not only grow, but could lead to panic.

Yeah, all it really takes is a mood swing and things will come crashing down. Some people have changed their tune and are being realistic but most are still in denial.

I don't want to get ahead of things here but it looks like we may start talking about the upcoming crash in the past tense by the winter of 08.

Quality adjusted prices fell by 0.2% but the trend is strongly negative - especially given the upcoming new home supply.

In my area the developers are tripping over themselves to complete product before it really hits the fan. Other, less savvy, developers are still starting new projects but there is loads of selection if you want to pick up a presale.

It is starting to smell like sweet vindication for us bears.

mohican "It is starting to smell like sweet vindication for us bears."Yes!!! And I thought it was the flowersthat smellso good! Hey coming back from work today I was approached by a Yaletown Realitor on the side walk!!! and invited to an open house near where I live. That! has never happened before! :-)

The National Post has a whole batch of articles on mortgages today, most of them pimping for the 40 year amortization as a way to improve housing affordability. "Mortgage 101 for New Buyers" starts out any warning that the percentage of owners may decrease in the future, based on new statistics that show fewer Canadians intend to buy in the near future. A Royal Bank honcho then opines that the main reason first time buyers are hesitant is because they don't understand all the mortgage options that are available (not the psycho prices then?). They extol the virtues of not having a total debt ratio that exceeds 40% (like that could happen for a first time buyer in Vancouver) and then flog the 40 year amortization as a great tool for first time buyers. The last 2 sentences in the article warn that you should increase your payments as your career progresses otherwise, "the costs can be staggering". Sweet. Here is thelink:
http://www.nationalpost.com/todays_paper/story.html?id=418671

Oh, and CMHC is "relaxing the rules" for budding real estate investors allowing up to 100% financing on units purchased to rent out. They will do anything to fan the flames of real estate speculation! Link:
http://www.nationalpost.com/todays_paper/story.html?id=418661