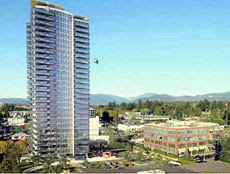 Another residential development in southwestern British Columbia has been put on hold after failing to find enough buyers willing to shell out up to $1.1 million for the luxury condominium units. A 28-floor residential tower in Abbotsford, B.C. is on hold after the project failed to find sufficient buyers. Construction crews have abandoned the 28-floor Brio project in Abbotsford. It was advertised as the tallest residential condominium development to be built between downtown Surrey, B.C., and downtown Calgary

Real estate industry officials say the target market that developer Matsqui Land Corp. was going after didn't materialize in spite of inducements that included the use of luxury cars and valet parking.

"The average price for condos [in the Fraser Valley] is $180,000,'' said Jim McCaughan of the Fraser Valley Real Estate Board. "Brio was selling some for over $1 million," he said.
Only 20 of the 174 units were sold before construction stopped several weeks ago.

News that Brio is on hold follows reports that a handful of condominium projects in the Vancouver area have run into financial difficulty, leaving dozens of purchasers in limbo.
Two recent examples are the Chandler Development Group Inc.'s H&H Yaletown project in Vancouver and the Garden City building in Richmond, which are in the hands of a receiver.
However, Brio buyers appear to have emerged relatively unscathed, even though their dreams of living in a luxury condo may take more time to realize.

All of the presale Brio purchasers got their deposits back with interest, a project spokesperson told CBC News. However, the spokesperson was unable to say when construction will resume.
In order to speed development at Brio, construction crews were being offered catered food service.

The residential tower was originally scheduled to be complete by April 2009.
Apartments ranging in size from 670 square feet to 2,028 square feet were priced between $279,000 and $1.1 million for the top-floor suites.

$1.1 Million to live in a shady part of Abbotsford?!!?!! Nucking Futs . . . No wonder they couldn't find buyers. Demand exhaustion here we come. I mean really, who wants a 'luxury' condo in Abbotsford.

No matter what promises of a new paradigm and continued appreciation are made there comes a point in every bubble where people are UNABLE to buy the bubble item. The reaching of this point signals the end of the bubble and the start of the painful and precipitous drop to reality. Look out below.
Posted by mohican at 3/07/2008 08:56:00 AM

It's not like there aren't high end condos in Abbotsford. There's a top floor by mill lake for sale now for $960K. But at least you get 3000 sq ft for that.

It'll be interesting to see what this does to buyer psychology. That development had to be a point of pride for some folks.

How far along was construction?

"How far along was construction?"

Just a big hole in the ground.

One of the Cora towers in Coquitlam is still only 60% sold and it was completed several months ago.

We also received a glossy cardstock flyer in our mailbox for something called Nahanni (or whatever) in Port Moody.

Its a nice view from the top.

Sounds like they had the brains to get out early, anyway.

Not a peep about any of this on the brioliving.ca web site, of course.

Grain, oil, coal, uranium, wheat, soybean, potash prices have roughly all doubled in the last year. It's something to think about regarding the effect of the possible commodoties bubble and impact on real estate in Western Canada.

I decided to call you on this, and randomly picked one from your list, uranium. The spot price is around $75 per pound, down from $140 a year ago. Factor in the decline of the U.S. dollar, and it has done even worse.

Futs indeed. What were the banks thinking when they said yes?

Uranium? You've been listening to MoneyTalks on CKNW too much. Those guys are experts at spotting the peaks and valleys to use for their arguments.

"The reaching of this point signals the end of the bubble and the start of the painful and precipitous drop to reality. Look out below."

Agree. Cancellations like these spawn the bug of uncertainty. That said, I'd hazard a guess that most builders will not cancel. The "shut down" option is probably the best scenario for most builders going forward but it's a difficult decision to make in a corporate environment. In the US most builders couldn't pull the plug and oversupply has been exacerbated.

As for a lot of the other commodity prices... the recent rise has been relatively unprecedented. It does not make sense that global growth is slowing and commodity prices rise inextricably higher.

It does not make sense that global growth is slowing and commodity prices rise inextricably higher.

Combination of greater fool's rushing in and price lag from the credit boom? Same thing happened in the 70's/80's false stagflation?

No, it does not. Nor do the Stats Can employment numbers make sense when US emplyment is tanking big time, and condo projects are going bust and sawmills are shutting down...juat a matter of delayed reaction until the pink slips begin to arrive.

This will only add fuel to the recession and to the decline of our housing market, which looks like it's finally starting to show the first grunts & groans of that downward ride.

Warnings from a world renowned authority like Shiller may not be enough to wake up all the local dummies stuck in denial, but you can bet that those "rich foreigners" are smart enough to pay attention.

For those who missed it, Shiller called Vancouver the "bubbliest city in the world"

I believe Shiller's comment was in reference to the boom/bust in '80/81, which was unlike anything else in his experience. This time around we didn't double in one year and similarly I think the drop won't be as fast either.

This time around we didn't double in one year and similarly I think the drop won't be as fast either.

Makes no difference how long it took Wile E. Coyote to get out midway across the canyon, he's going to fall just as fast.

m- Schiller's comment has been reported/repeated many times. My recollection is of an interview where he was asked about Vancouver, and that's the context I recall. Certainly my memory isn't infallible, and unfortunately I can't find a transcript, so whatever.

In any case, Vancouver has pretty much risen to the top of the heap of foam now.

This is sort of off topic, but I am looking to be a first time buyer, essentially I would like to move out on my own, without throwing my money away on rent. Of course, I don't want to throw it away on a terrible investment either. I am thinking of the abbotsford area, nothing fancy like that place though, I have been looking at the old 20 some odd year old condos are really not a whole lot cheaper then a lot of the new ones, such as tempo, tamarind, latitude, etc... I was wondering if you guys on here had any insight you could provide me, I'm out for all the info I can get... I think I really should be waiting for the bubble to really burst, and that would be the best time to buy, when the prices go down, rather then have them go down while I am paying the high price. I just don't know how long this will take to do that, if it will be right after the olympics, or sooner, or later then that... I was reading in another one of these blog reports about how the pre-sale buyers may end up selling off cheap if they see the bubble start to go... I am sorry if I'm not supposed to post this here, but this is where I see people with info, and I had to ask. Any extra insight is appreciated, and if I've been an annoyance feel free to ignore or remove this comment (for those with the ability) Thanks.

essentially I would like to move out on my own, without throwing my money away on rent.

I don't like throwing money away on rent either. So here's my advice. You have a choice - renting money from a bank (mortgage), or renting an apartment.

If renting the money from the bank costs you less, it makes sense to buy.

The home renovations that pay off

Even if you had the cash to buy without borrowng, it would probably earn more interest than what you're paying in rent.

If you've been watching the numbers for some time, it should be quite obvious that we're finally on the brink.

The recession news is starting to spook people and the biggest inventory gain in several years looks like it's ready to explode.

"The home renovations that pay off"

Let's see how well those home renovations "pay off" as prices start falling. I love walking into open houses and hearing the line that the owner just put "$40K's worth" of renos into the kitchen. I never ask what they actually spent: I'd never get an honest answer anyways.

ohplease - M- posted a tinyurl link to that statement Shiller made, quoted in the Globe and Mail, and it certainly sounds present day: "Vancouver IS the most bubbly city in the world."

Click Here to read it, (if the hyperlink works).

...except when you consider that commodities across the board were driven into the ground over the past 20 years, causing exploration efforts to be basically mothballed, resulting in a massive departure of skilled professionals and labourers from the mining industry coupled with almost no training of new people and zero investment in mining infrastructure and equipment, and increasing consumption from the BRIC countries, whose growing populations and economies and increasing wealth is resulting in better diets for their citizens, putting greater strain on food supplies ...

and let's not forget the artificially low interest rates of the past 7-10 years increasing the broad money supply at rates over 10% in most of the Western world...

I think the price was too expensive.