Value of Gold and Dow Jones in Canadian Dollars

With the rapid rise in the Canadian dollar I was curious to see how it has affected US demoninated investments.

First up is the Streetracks Gold ETF which is the equivalent to 1/10th an ounce of gold. Gold is quoted in US dollars so it can be difficult for us Canadians to grasp how that affects us when our currency is so volatile against the US dollar. Gold was $443 US in late 2004 and $535 CDN. At the beginning of 2007, gold was $622 US and $725 CDN. Now gold is at $822 US and $754 CDN. Dramatic appreciation in US dollars and very modest appreciation in Canadian dollars. 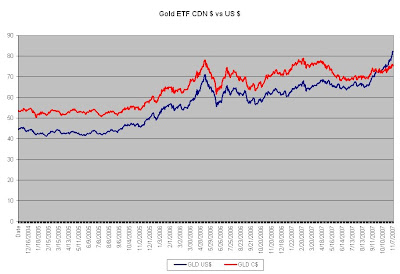 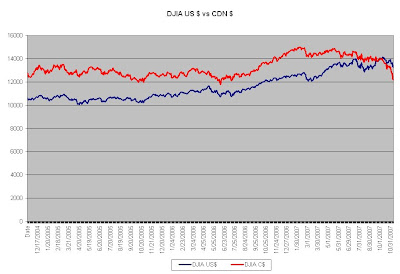 Great graphs Mohican! I always thought that but needed to see it! You know what would be interesting is a graph of Vancouver Housing prices in the last five years, adjusted for currency US vs CDN. Apparently we have all these rich foreign investors who would base there "wealth" on the world standard US buck. Wonder how the two lines would compare?

I was going to do Oil and Real Estate but I just didn't have time today. Maybe this weekend.

Further on my first comment; my suspicion is we are in a worse bubble with the US buck then the local loonie? Well for cryin out loud...you have a life? Have a great weekend! :-)

Great graphs. I'm surprised the Dow is actually down in CDN$, I would not have guessed that. Oil would be a great addition, as would the TSE in US and CDN.

I know what you're talking about when referring to U.S. dollar denominated investments in CDN $. I used to have some of the STREETTRACKS GOLD ETF in my portfolio, but I ended up selling it because of the rising Canadian dollar. I watched the gold price rise by almost $40/ounce, only to watch the value in CDN $ actually drop a little.

I figured that until the CDN $ stopped its meteoric rise, I would try to stay away from U.S. dollar denominated investments that weren't hedged back to the CDN $.

Off topic...
I've seen RE ads for condos that haven't sold are having to reduce their asking price, but what the realtors seem to be doing is negotiating a discount off the original asking price, and then lowering the asking price to somewhere around the offer price.

Maybe they are using this as a sales tool or something. You know, the seller was going to be lowering the price by X amount next week/month, but if you buy today, we'll give it to you for that price, or something.

I've noticed this by following a few condos in the RE publications for a while. They are listed at a certain price for a few weeks or months, then as soon as they appear with a SOLD stamp across them, the asking price in the ad is lower (sometimes much lower) than when it was originally advertised.

I've then seen these same realtors bragging in their ads that their listings sell for an average of 98-99% of their asking price. They use this to drum up business, I guess.

It allows them to put a SOLD sign across the listing, and also gives them bragging rights that their sales-to-asking price ratio is high, and that the market is healthy. This may also figure into RE statistics as well. Does this not seem a little fishy, or is it just coincidence?

I'm pretty sure it's the most recent price so keep that in mind.

There are all sorts of tricks people use to sell things, not just homes. One is to put a big red "REDUCED" sticker on the product. Tricks, nothing more. I cannot tell others how to buy, but I would ignore everything else except the price and the underlying product being sold. Everything else is extraneous.

Absolutely. You pays your money and you takes your choice.

I am always mystified by those who whine that the DOM on the MLS isn't accurate, etc. WTF cares? You're buying the house, not the listing. Pay what you think the house is worth. If someone is willing to pay more, that's their problem. You're the winner, not them.


I am always mystified by those who whine that the DOM on the MLS isn't accurate, etc. WTF cares?

The end result of manipulative games is zero. However, in an inefficient market the perception of rising prices, or at least flat prices, and can prolong psychologically driven speculation.

Thus: For any individual property it doesn't really make any difference, but in the aggregate it can affect the psychology.

In the end I think the impact is marginal. The party will end when it ends. Judging by the fact that sales are still high despite insane affordability, expiring low rate preapprovals, crashing prices down south, and a liquidity crises with worldwide reverberations, tells me that this cat still has at least one life left. But die it will.